Temperature records were smashed in the U.S. Pacific Northwest and western Canada amid a historic heat wave described by the National Weather Service (NWS) as "historic, dangerous, prolonged and unprecedented." Daytime temperatures were pushed into the triple digits, triggering heat warnings from Oregon to Canada's Arctic territories on Sunday, June 27, 2021.

For the second consecutive day, temperatures rose to record-breaking, dangerously high levels in the Pacific Northwest on Sunday.

The abnormal heat swelled north of the international border as Canada registered its highest temperature ever recorded when Lytton in British Columbia hit 46.7 °C (116 °F).

Prior to the record heat, NSW warned that temperatures will be "historic, dangerous, prolonged and unprecedented," adding, "we can’t stress enough how impactful this heat will be to nearly every person and community in the Pacific and Inland Northwest region."

NWS in Seattle and Portland described the heat as unprecedented, forecasting scores of long-standing records. More than 25 million residents from Northern California are under excessive heat warnings, which are in force until next week.

Hotter tomorrow. Hotter the day after… I can't believe what I am seeing.

The US Pacific Northwest and BC Canada is at the epicentre of one of the most outrageous heatwaves in history.pic.twitter.com/sylEDfj8dJ

A heat advisory for Northern Lander and Northern Eureka counties will be in effect from 11am today through 11pm Thursday. #nvwx pic.twitter.com/YtKttRij03

The high today in Phoenix reached 113°F. Would you believe us if we told you there was a location over 1,200 mile north of here that was hotter?

The record high will likely be surpassed on Monday, with temperatures expected to be even more extreme than those experienced over the weekend. #BCHeat #BCHeatwave pic.twitter.com/nIBFbM8u4Z

Portland, Oregon, recorded its hottest day ever on Saturday by climbing to a sizzling 108 degrees Fahrenheit. The following day, Portland broke the newly-set record and recorded 110 degrees: https://t.co/EyJvyoI4wW pic.twitter.com/wyZKIQ6JQL

Washington, Oregon, and Idaho could see their hottest June on record, NWS added, seeing temperatures of at least 45 °C (113 °F). As heat soars north of the border, B.C. and Alberta in Canada are also forecast to experience record-setting heat.

"Even though we’ve had heat waves in June, they haven’t been nearly as strong as this one is forecast to be," said climatologist Larry O'Neill. "Other past exceptional heat waves that we’ve had in the Pacific Northwest– they've all occurred after mid-July."

On Monday, June 28, NWS warned that the "intense, prolonged, and record-breaking heat wave will continue over the Western U.S. through much of this week."

Above-average temperatures and oppressive heat are expected across the Northeast U.S. early this week, "before the core of the unprecedented heat shifts into interior sections of the region on Tuesday and Wednesday (June 29 and 30)."

"Numerous daily, monthly, and all-time temperature records are forecast. To put it in perspective, today will likely go down in history as the hottest day ever recorded for places such as Seattle, WA, and Portland, OR. This level of heat is extremely dangerous and can be deadly if proper heat safety is not followed."

"After a couple warm and humid days, even higher temperatures are expected over the next couple of days." 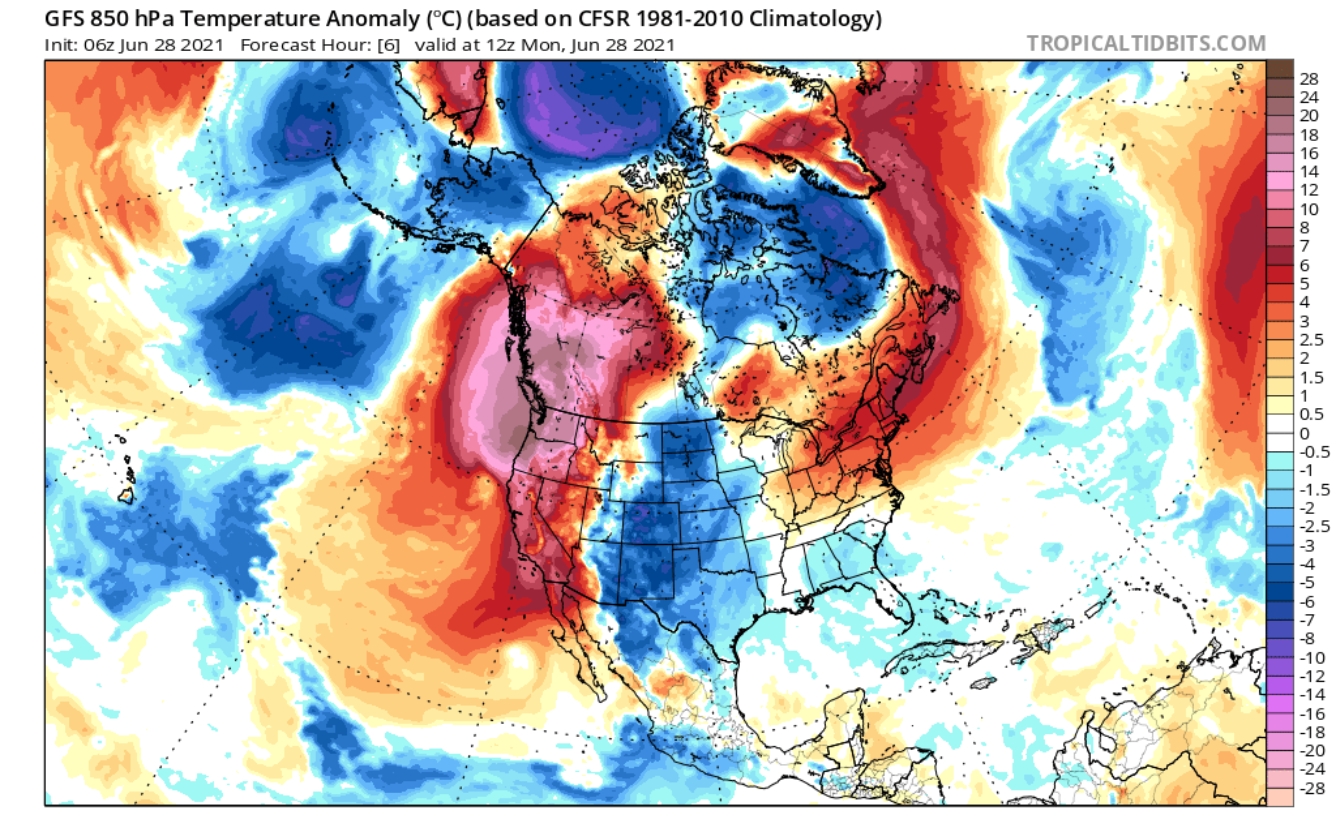