Yasa has rapidly intensified into a Category 5 cyclone on the Australian tropical cyclone intensity scale ​by 15:00 UTC on December 15, 2020, and is expected to move over Fiji on December 17, bringing destructive winds, storm surge with waves as high as 16 m (52 feet) and widespread heavy rain. Yasa is the first Category 5 cyclone in the South Pacific (east of 135 °E) since Zoe in 2002.

All non-essential civil servants are required to stay home during the height of the storm, Fiji's Disaster Management Office (NDMO) said at 22:00 LT on December 16 (10:00 UTC; Fiji's timezone is UTC+12).

The Maritime Safety Authority of Fiji issued a NO SAIL for all vessels in Fiji waters effective from 23:59 LT tonight, December 16.

All public transportation services were ordered to cease operations from 23:00 LT tonight until further notice.

The office urged people living in coastal areas to evacuate to the nearest evacuation center while they can. The Fiji Meteorological Service advised coastal dwellers to expect storm surge with waves as high as 16 m (52 feet).

Fijians living along coastal waters where a Storm Surge and Damaging Heavy Swell is in effect were urged to clear all loose items along the shore and within compounds to avoid further damage by storm surges. 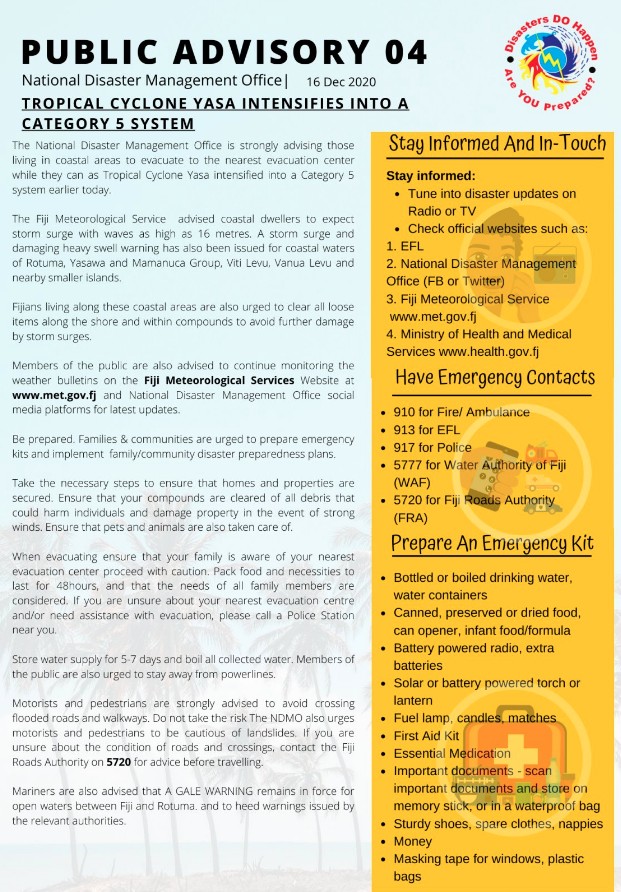 At 15:00 UTC on December 16, Yasa had maximum sustained winds of 260 km/h (160 mph) and gusts to 315 km/h (195 mph), according to the JTWC. The system is moving over a favorable environment with warm sea surface temperatures, low vertical wind shear, and robust poleward and equatorial outflow aloft.

A continued favorable environment will allow Yasa to maintain this intensity over the next 12 hours, followed by a gradual weakening thereafter. 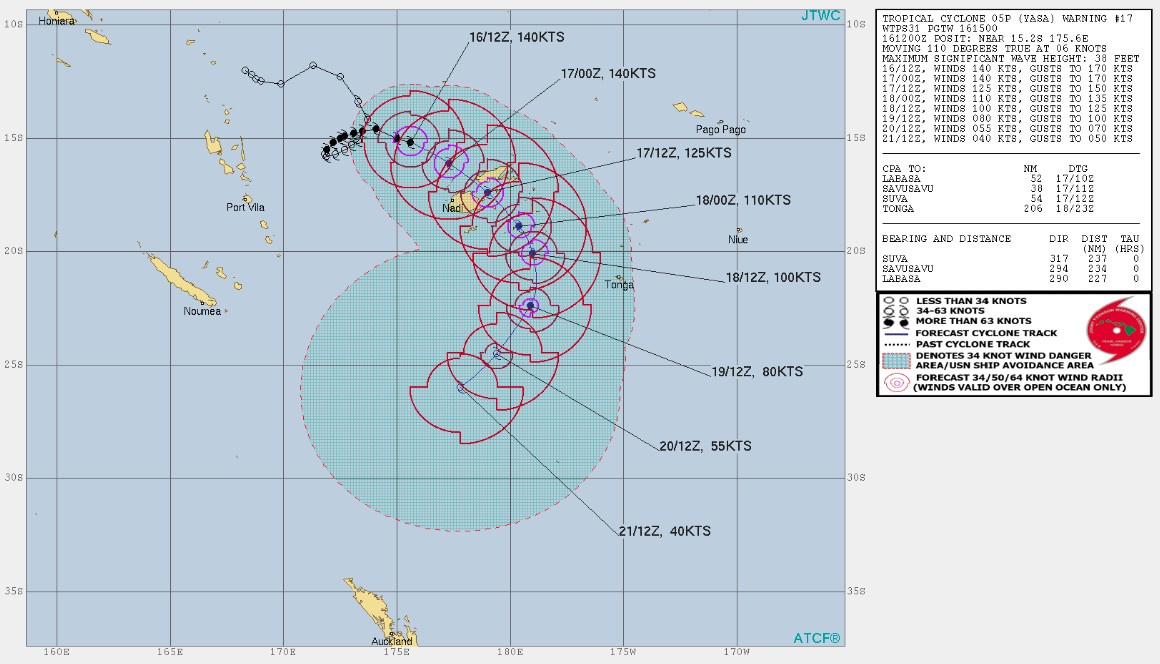 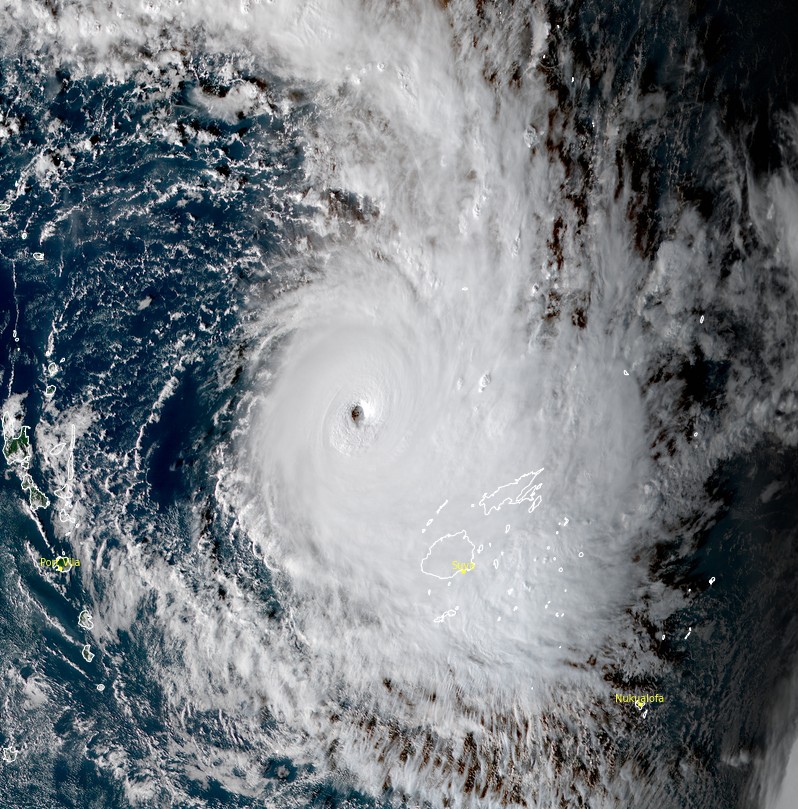 Destructive winds are likely to begin several hours before the cyclone center passes overhead or nearby.

As Yasa tracks closer to Fiji, winds are expected to increase to damaging gale force winds with average speeds of 75 km/h (45 mph) from 03:00 LT, December 17 in Yasawa and Mamanuca Group, Viti Levu, Vanua Levu and nearby smaller islands, according to the Fiji Meteorological Department.

High waves of more than 5 to 7 m (16 –  23 feet) can be expected over these areas from early tomorrow. Significant wave height of 14 m (46 feet) or more and damaging heavy swells is expected when the eye of the cyclone moves closer. There is a risk of sea flooding of low-lying coastal areas especially during high tide from storm surges and damaging heavy swells on Thursday and Friday.

By Friday (LT), the whole of Fiji is expected to experience damaging winds or stronger, widespread heavy rain that can cause landslides, severe flooding and bursting of river banks, storm surge, damaging heavy swells, and high waves that can cause sea flooding in coastal areas. 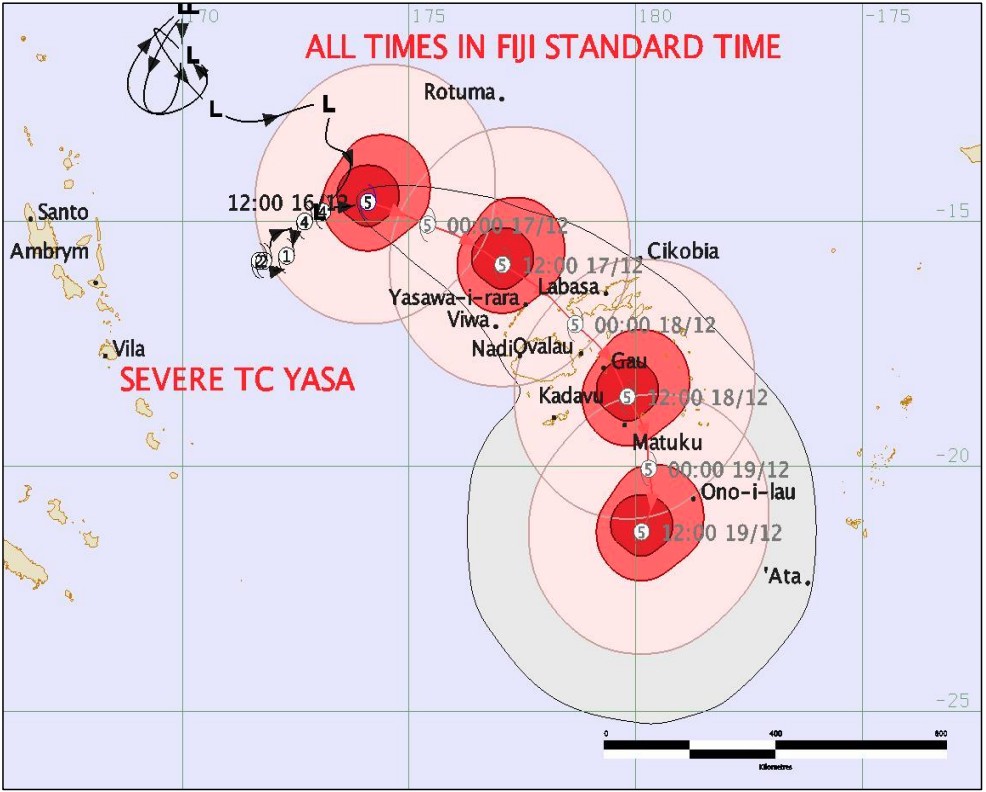 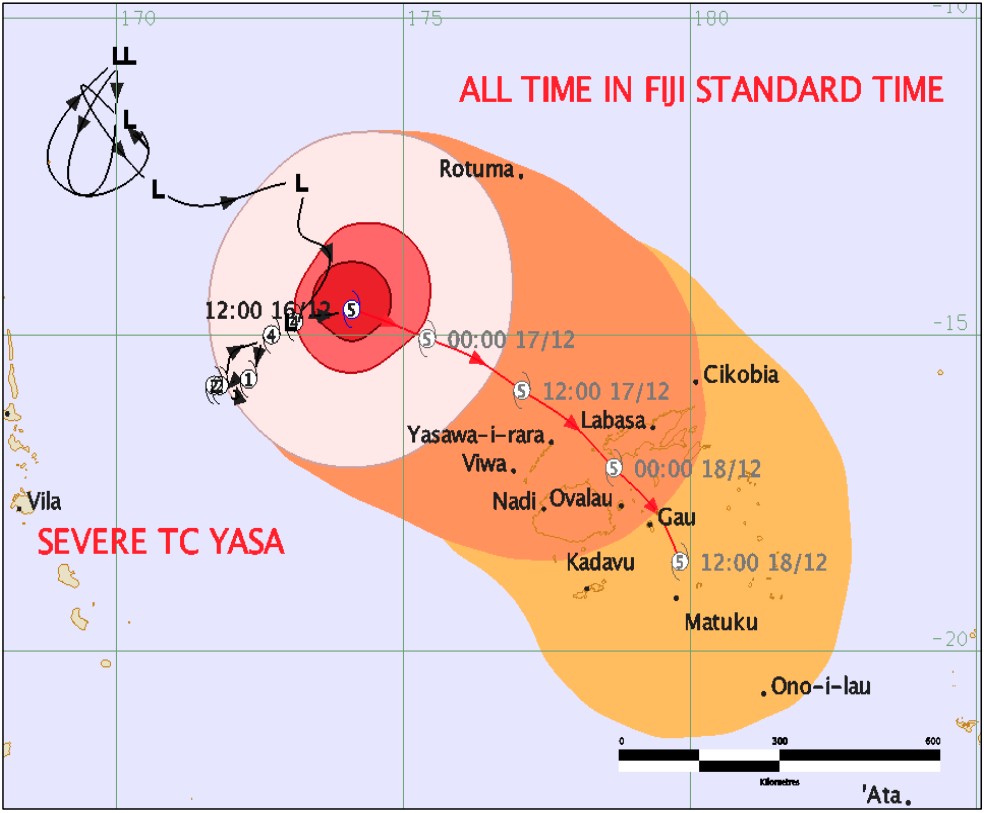 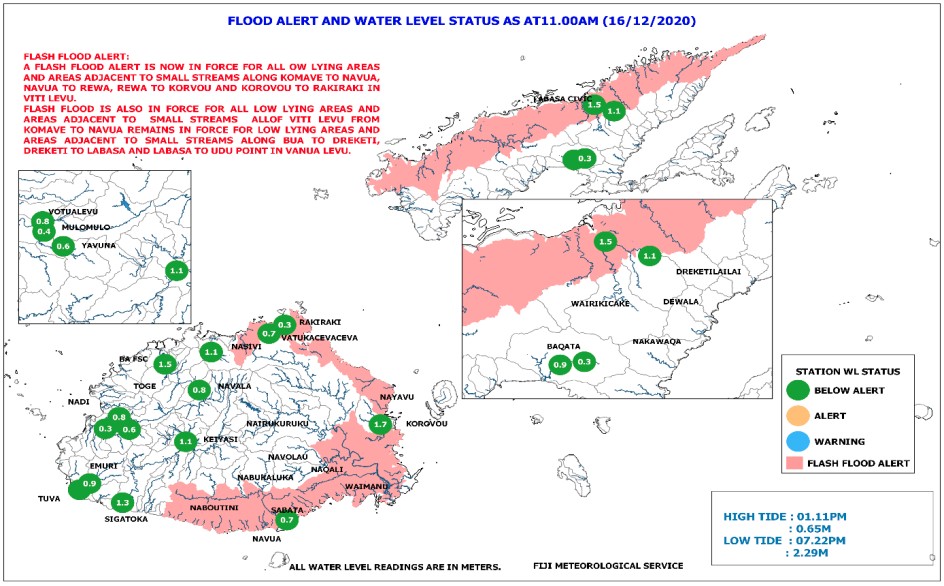 It can cause widespread damage to properties and infrastructures, severe disruption to electrical power distribution and communication services. It can uproot big trees and cause total damage to crops and vegetation.

Meanwhile, Category 2 Tropical Cyclone "Zazu" has moved away from Tonga towards the ocean between Tonga and Niue. 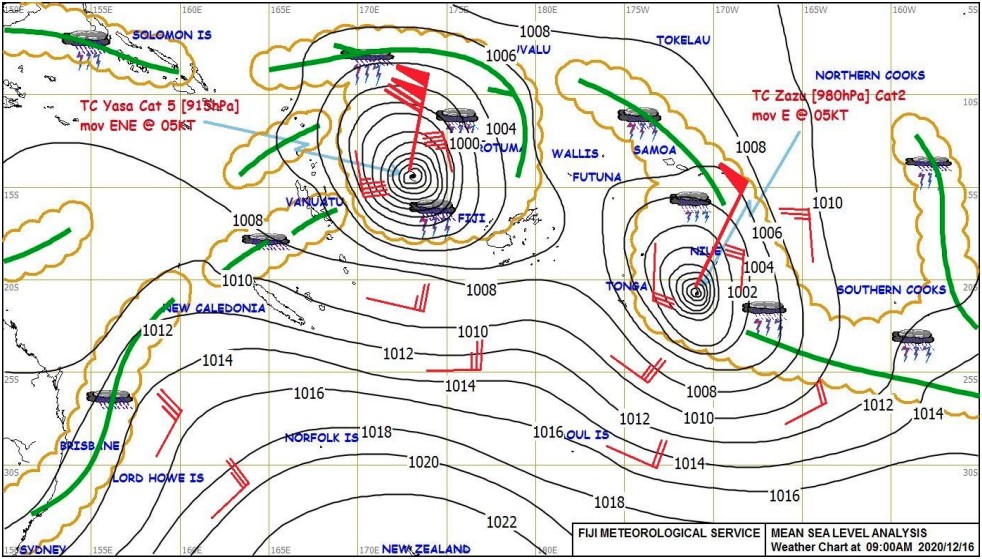