A new tropical cyclone is organizing off the coast of North Carolina, U.S. on July 9, 2020. Environmental conditions are conducive for development, and a tropical or subtropical cyclone will likely form later today or tonight — NHC gives it 80% chance of formation in the next 48 hours.

If it gets named — next name in line is Fay — it will be the earliest 6th named storm formation in the Atlantic Ocean on record. The current record holder is Franklin on July 22, 2005.

Just a couple of days ago, on June 6, the basin had another record-breaker — Tropical Storm "Edouard" – the earliest 5th named storm in the Atlantic on record. The previous record-holder for the 5th named storm was Emily on July 12, 2005.

According to Dr. Philip Klotzbach, a meteorologist at CSU specializing in Atlantic basin seasonal hurricane forecasts, the first 5 Atlantic named storms of 2020 generated a measly 6.7 ACE (Accumulated Cyclone Energy — ACE — an integrated metric that accounts for intensity and duration).

Basically, the first 5 Atlantic named storms of 2020 have been quite weak and of relatively short duration, Klotzbach noted.

The Colorado State University (CSU) has chosen six analogs for its July seasonal hurricane forecast: 1966, 1995, 2003, 2008, 2011, and 2016. All of these years had above-average Atlantic hurricane activity and were generally characterized by cool neutral ENSO or La Nina conditions and warm tropical Atlantic.

Another reason for the active CSU Atlantic hurricane season forecast is odds of El Nino this summer/fall are extremely low. Tropical eastern and central Pacific remain cooler than normal. Atmospheric circulation is looking more La Nina-like with suppressed convection near the dateline. 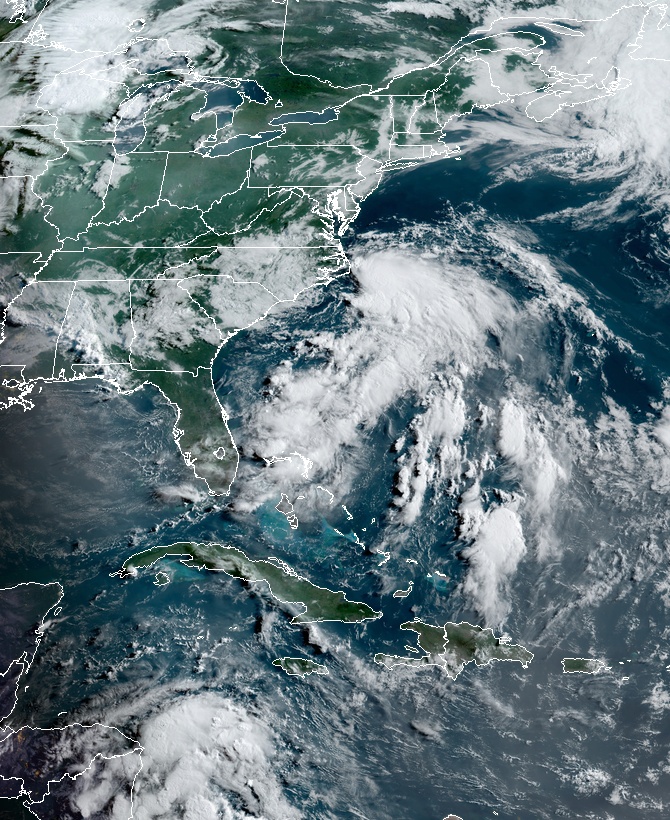 At 12:00 UTC on July 9 (08:00 EDT), the low pressure area (expected to become Tropical Cyclone "Fay") was located about 96 km (60 miles) east of Wilmington, North Carolina. The National Hurricane Center (NHC) has given it 80% chance of formation through the next 48 hours.

The low is expected to move northeastward or north-northeastward near or just offshore of the North Carolina Outer Banks later today and then along the mid-Atlantic coast tonight through Friday night (local time), July 10.

Regardless of development, the system is expected to produce locally heavy rainfall that could cause some flash flooding across portions of eastern North Carolina, the coastal mid-Atlantic, and southern New England during the next few days.

Gusty winds are also possible along the North Carolina Outer Banks today, and along the mid-Atlantic and southern New England coasts Friday and Saturday.