The USGS Hawaii Volcano Observatory (HVO) reported increased seismic activity at the submarine Lōʻihi volcano in Hawaii from May 11 to 12, 2020. More than 100 earthquakes were detected, but USGS noted that there is no indication that a submarine eruption has occurred and there are no significant hazards of concern to the Island of Hawaiʻi at this time. Lōʻihi is the youngest Hawaiian volcano located approximately 35 km (21.7 miles) SE of Pahala, at a water depth of approximately 1 km (3 300 feet). Its last major activity was back in 1996.

This is a significant increase above long term background rates of fewer than three tremors per day at Loihi, generally measuring M2 below. 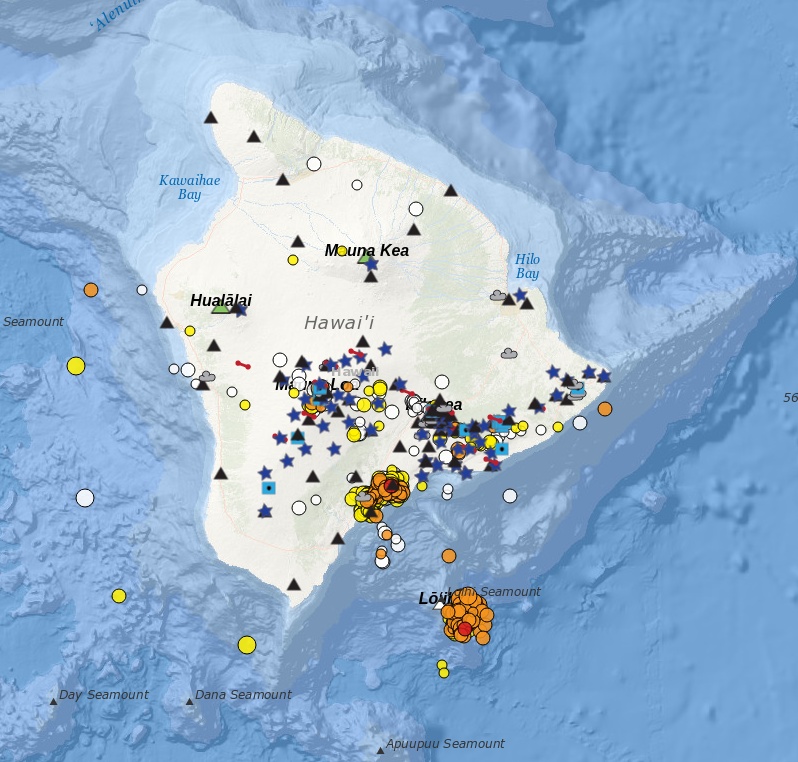 Tina Neal with the USGS HVO said her team is monitoring the volcano for activity and that she expects other signs of eruption. Loihi's last major activity was around 24 years ago, during a swarm of more than 4 000 events.

Neal added that given Loihi's location underwater, it is difficult to pinpoint what exactly is happening at the volcano, but she noted that the current increased seismic activity in the area does not pose a threat to Hawaii residents.

"This swarm may represent a brief magmatic intrusion or movement of magmatic fluids within the volcanic edifice," USGS said in a statement issued 22:22 UTC on May 12. "Although the swarm appears to have diminished in intensity if earthquakes become shallower, it could lead to the beginning of a submarine eruption, similar to what occurred in 1996."

If an eruption would occur, USGS said it may cause partial draining of its summit magma chamber, as well as summit collapse. Abrupt changes to the volcano's surface could displace massive volumes of ocean water, which may generate small local tsunami waves.

Earthquakes of magnitude 4 and above could occur if the swarm were to intensify and these may be felt on the Island of Hawaiʻi.

If an eruption or stronger earthquakes occur, very small tsunami waves may affect southeast shores of the Island of Hawaiʻi. Relatively low-energy, steam- and gas-driven explosions can occur at the depth of Lōʻihi, but with limited local effects on the volcano and surrounding ocean water.

There is no direct relationship between the current Lōʻihi swarm and the ongoing increased seismicity observed in Pāhala over the past year, USGS said.

The Lōʻihi swarm is ~35 km (21.7 miles) southeast of Pāhala, at significantly shallower depths. The current Lōʻihi swarm is also unrelated to seismicity observed on the south flank of Kīlauea.

Loi'hi seamount is an active volcano on the seafloor south of Kīlauea Volcano, about 30 km (19 miles) from the shoreline of the Island of Hawaiʻi. The top of the seamount is about 975 m (3 199 feet ) below sea level. The volcano consists of a broad summit area marked by three pit craters and two prominent rift zones extending from the summit about 22 km (13.6 miles) SSE and about 15 km (9.3 miles) NNE. The volcano likely has a shallow magma chamber between 1 to 2.5 km (0.6 to 1.6 miles) deep below the summit.

The largest earthquake detected at Lōʻihi was M5.1 in May of 2005. Many of the 1952 Lōʻihi earthquakes were felt in coastal communities and one of the earthquakes generated a small tsunami that swept inland about 180 m (600 feet) at Kalapana; no damage was reported.

For the six weeks commencing July 16, 1996, HVO recorded more than 4 000 earthquakes in the LOIHI area. 95 of these earthquakes were between magnitude 4.0 and 4.9, and nearly 400 were stronger than magnitude 3.

Most of the earthquakes occurred during the last half of July during three time periods, each lasting about two to five days and separated by less than one to four days. Subsequent undersea expeditions to the area discovered that the volcano's summit area had collapsed to form a new crater about 550 m (1 800 feet) across and 275 m (900 feet) deep.

Hydrothermal vents were observed in the new crater, and evidence was found of newly erupted lava.

Loihi seamount, the youngest volcano of the Hawaiian chain, lies about 35 km (21.7 miles) off the SE coast of the island of Hawaii. Loihi (which is the Hawaiian word for "long") has an elongated morphology dominated by two curving rift zones extending north and south of the summit.

The summit region contains a caldera about 3 x 4 km (1.8 x 2.5 miles9 wide and is dotted with numerous lava cones, the highest of which is about 975 m (3 200 feet) below the sea surface. The summit platform includes two well-defined pit craters, sediment-free glassy lava, and low-temperature hydrothermal venting.

An arcuate chain of small cones on the western edge of the summit extends north and south of the pit craters and merges into the crests prominent rift zones.