A new study commissioned by the European Southern Observatory (ESO) evaluated the effects of mega-constellations on astronomical observations and scientific research as astronomers recently expressed concerns over its impact. The research considered a total of 18 representative satellite constellations under development by Amazon, OneWeb, SpaceX, and others– comprising of more than 26 000 satellites.

Many companies are developing satellite mega-constellations for better communication– this process entails launching thousands of spacecraft into low orbit around the planet.

According to the European Space Agency (ESA), there are approximately 5 500 artificial satellites in the orbit– some 2 300 of that still functional.  However, SpaceX, for instance, plans to launch further 12 000 into the orbit as part of its Starlink mega-constellation project that aims to provide a low-cost internet connection to remote areas.

Researchers discovered that such projects may negatively affect astronomical observations, backing up the concern of many astronomy experts who voiced their opinions on its impact.

Huge telescopes like ESO's Very Large Telescope (VLT) and the upcoming Extremely Large Telescope will be "moderately affected" by the constellations. Moreover, the effect would be heavier for long exposures– up to three percent of which could be impacted during twilight.

Observations on wide fields especially those done with huge telescopes would also see the greatest impacts. 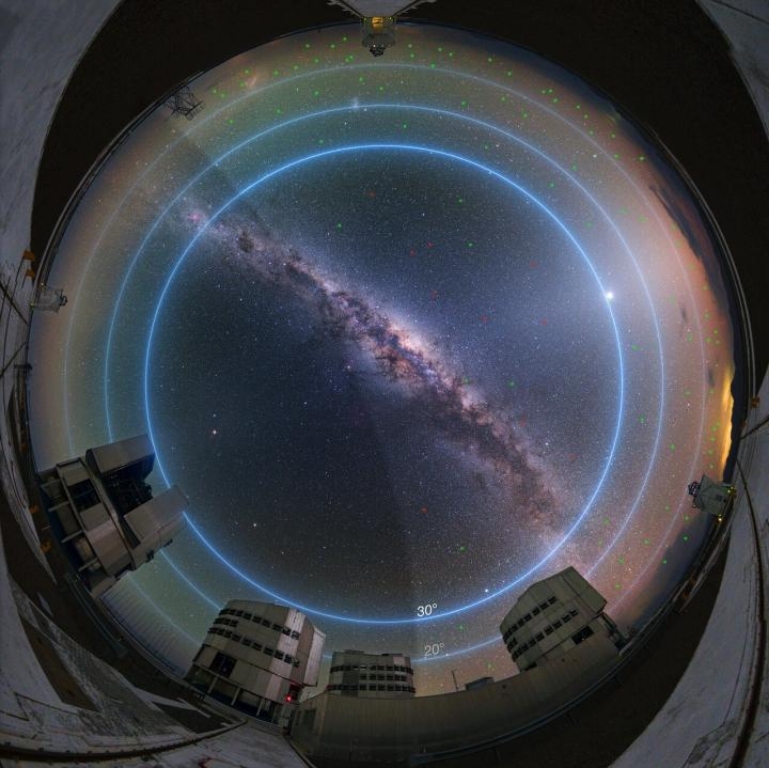 On the other hand, the effect would be lighter for shorter exposures, with less than 0.5 percent of observations affected. Observations conducted at other times would also see fewer impacts as satellites would be in the shadow.

"For example, up to 30% to 50% of exposures with the US National Science Foundation's Vera C. Rubin Observatory (not an ESO facility) would be "severely affected”, depending on the time of year, the time of night, and the simplifying assumptions of the study," said ESO.

With this, the study mentioned two important ways astronomers could try to mitigate the damage by satellite constellations: first would be to set their telescopes to capture the sky when there is no satellite present in a given region; second, interrupt a telescope's vigil by identifying the exact time when a bright satellite will pass through the field of view, closing the shutter before the moment of contact.

"There are also ways to mitigate the existing satellites, but best is to make sure that those that are launched will not cause problems," said Oliver Hainaut from ESO.

Furthermore, the researchers noted that the paper is only a starting point, and further research using more sophisticated models needs to be carried out on this concern to help reveal the nature of disruptions in the future.

"ESO supports the development of regulatory frameworks that will ultimately ensure the harmonious coexistence of highly promising technological advancements in low Earth orbit with the conditions that enable humankind to continue its observation and understanding of the Universe," ESO wrote.

The ESO study uses simplifications and assumptions to obtain conservative estimates of the effects, which may be smaller in reality than calculated in the paper. More sophisticated modelling will be necessary to more precisely quantify the actual impacts. While the focus is on ESO telescopes, the results apply to similar non-ESO telescopes that also operate in the visible and infrared, with similar instrumentation and science cases.

Satellite constellations will also have an impact on radio, millimetre and submillimetre observatories, including the Atacama Large Millimeter/submillimeter Array (ALMA) and the Atacama Pathfinder Experiment (APEX). This impact will be considered in further studies.

The effect of satellite mega-constellations on astronomical observations in the visible, near-infrared, and thermal infrared domains is estimated using a simple methodology, which is applied to ESO telescopes and instruments as examples (radio and (sub-)millimetre domains are not considered here). The study considers a total of 18 constellations in development by SpaceX, Amazon, OneWeb, and others, with over 26 thousand satellites, constituting a representative distribution. This study uses a series of simplifications and assumptions in order to obtain conservative, order-of-magnitude estimates of the effects: the satellites are assumed to be uniformly spread over the Earth’s globe, and their magnitude is estimated using a simplistic model calibrated on actual observations. The effect on various types of ground-based telescopic observations is estimated using a geometric probabilistic approach. The ‘trains’ of very-low altitude satellites typically observed immediately after launch are extremely bright due to their very low orbit. They also fall very quickly in the shadow of the Earth after sunset. However, this initial bright state is not considered further, as the satellites quickly disperse into their higher altitude orbits. The number of illuminated satellites from the constellations above the horizon of an observatory ranges from approximately 1600 immediately after sunset, decreasing to 1100 at the end of astronomical twilight, most of them (∼ 85%) close to the horizon (below 30◦ of elevation). The large majority of these satellites will be too faint to be seen with the naked eye: at astronomical twilight, 260 would be brighter than magnitude 6 (i.e. visible in exceptional conditions), 110 brighter than 5 (i.e. visible in good conditions). Again, most of them (∼ 95%) will be close to the horizon (below 30◦ of elevation). The number of naked-eye satellites plummets as the Sun reaches 30–40◦ of elevation below the horizon. Specular flares and occultations by satellites are expected to cause only negligible effects on telescopic astronomical observations. The light trail caused by the satellite would ruin a small fraction (below the 1% level) of telescopic exposures using narrow to normal field imaging or spectroscopic techniques in the visible and near-infrared during the first and last hours of the night. Similarly, the thermal emission of the satellite would affect only a negligible fraction of the observations in the thermal infrared domain. However, wide-field exposures and long medium-field exposures would be affected at the 3% level during the first and last hours of the night. Furthermore, ultra-wide imaging exposures on a very large telescope (where saturation of the satellite trails has a ruinous effect on the detectors, such as those from the National Science Foundation’s Vera C. Rubin Observatory, formerly known as LSST), would be significantly affected, with 30 to 40% of such exposures being compromised during the first and last hours of the night. Coordination and collaboration between the astronomical community, satellite companies, and government agencies are therefore critical to minimise and mitigate the effect on astronomical observations, in particular on survey telescopes.