A researcher from the University of Rhode Island’s Graduate School of Oceanography (GSO) and five other scientists have discovered an active volcanic heat source beneath the Pine Island Glacier in Antarctica.

Assistant Professor Brice Loose of Newport, a chemical oceanographer at GSO and the lead author, said the paper is based on research conducted during a major expedition in 2014 to Antarctica led by scientists from the United Kingdom. They worked aboard an icebreaker, the RRS James Clark Ross, from January to March, Antarctica’s summer.

"We were looking to better understand the role of the ocean in melting the ice shelf," Loose said. "I was sampling the water for five different noble gases, including helium and xenon. Helium-3, the gas that indicates volcanism, is one of the suite of gases that we obtain from this tracing method." 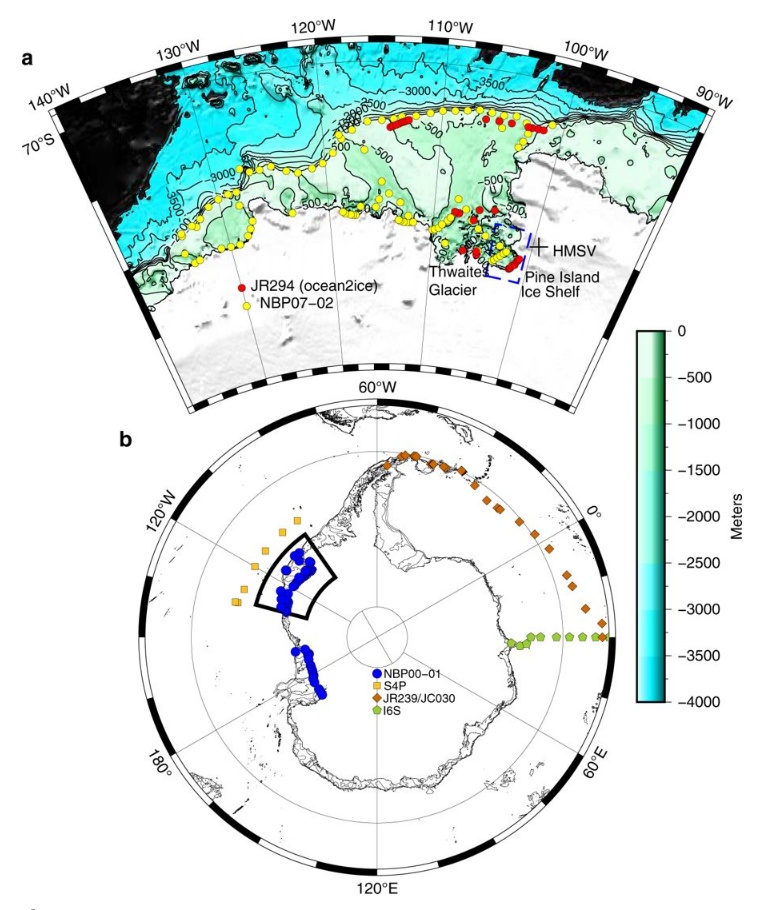 Map of 3He measurements around Antarctica. a An expanded view of the Amundsen Sea and locations of helium/neon hydrographic stations during NBP07-02 (2007, yellow) and JR294 (2014, red). The “ + ” demarcates the approximate location of the Hudson Mountain Subglacial Volcanoes. The blue dashed line demarcates Pine Island Bay. The mapped region of the Amundsen Sea is indicated by the inset box in b, which depicts the regional and offshore helium isotope hydrography. Credit: Loose et al. Nature Communications

"We weren’t looking for volcanism, we were using these gases to trace other actions," he said. "When we first started seeing high concentrations of helium-3, we thought we had a cluster of bad or suspicious data."

The West Antarctic Ice Sheet lies atop a major volcanic rift system, but there had been no evidence of current magmatic activity, the URI scientist said. The last such activity was 2 200 years ago, he said. And while volcanic heat can be traced to dormant volcanoes, what the scientists found at Pine Island was new.

"You can’t directly measure normal indicators of volcanism like heat and smoke because the volcanic rift is below many kilometers of ice," Loose said

But as the team conducted its research, it found high quantities of an isotope of helium, which comes almost exclusively from the mantle, Loose said.

"When you find helium-3, it’s like a fingerprint for volcanism. We found that it is relatively abundant in the seawater at the Pine Island shelf.

Map of elevated 3He samples from 2007 and 2014 in Pine Island Bay. MODIS images of Pine Island Bay on a February 25, 2007 and b February 17, 2014. In 2007, fast ice precluded sampling directly at the front of the ice shelf cavity. The colored squares depict the maximum value of δ3He in the top 300 m of the water column. Credit: Loose et al. Nature Communications

Loose said the amount of ice sliding into the ocean is measured in gigatons or billions of metric tons.

However, he cautions, this does not imply that volcanism is the major source of mass loss from Pine Island.  On the contrary, "there are several decades of research documenting the heat from ocean currents is destabilizing Pine Island Glacier, which in turn appears to be related to a change in the climatological winds around Antarctica," Loose said.  Instead, this evidence of volcanism is a new factor to consider when monitoring the stability of the ice sheet.

The scientists say that heat energy released by the volcanoes and hydrothermal vents suggests that the heat source beneath Pine Island is about 25 times greater than the bulk of heat flux from an individual dormant volcano.

It remains unclear how the newly discovered activity affects knowledge about the glacier, because researchers don't yet know how volcanic heat is distributed along the bottom of the ice sheet. However, researchers do know that the heat from the volcano is producing melting beneath the ice sheet. This meltwater is leaking across the grounding line where the ice shelf meets the ocean.

The heat source, Loose and team note, is about half that of the active volcano Grímsvötn, in Iceland.

While the effects of volcanic heat on the Antarctic ice sheets is an active topic of research, this study provides the first geochemical evidence of a contemporary volcanic heat source, emphasizing the need to detect and understand volcanism, including in models of ice-sheet behavior. The greater understanding of volcanism could alter scientists' perception of the mechanics of ice-sheet loss, including in the areas where the glaciers meet the sea.

Featured image: This view is from the bow of the icebreaker the RRS James Clark Ross on a 2014 scientific expedition, during which University of Rhode Island researcher and five other scientists discovered an active volcanic heat source beneath the Pine Island Glacier in Antarctica. Photo courtesy of Brice Loose