A streak of unusually intense thunderstorms, dust storms and lightning ravaged India this year, claiming lives of more than 200 people and causing huge material damage. While dust storms and thunderstorms are common in the country at this time, the intensity appears to be anomalous, NASA's Earth Observatory reports.

The state of Andhra Pradesh in the country's southeast was struck by about 40 000 lightning bolts in just 13 hours late April 2018. That's more than the number of strikes that occurred in the entire month of May 2017.

On May 2, 2018, a cluster of strong thunderstorms, accompanied by strong winds and lightning, swept through the Rajasthan region in the north, knocking over large structures and harming those in the way. The potent thunderstorms whipped up one of the deadliest dust storms in decades. 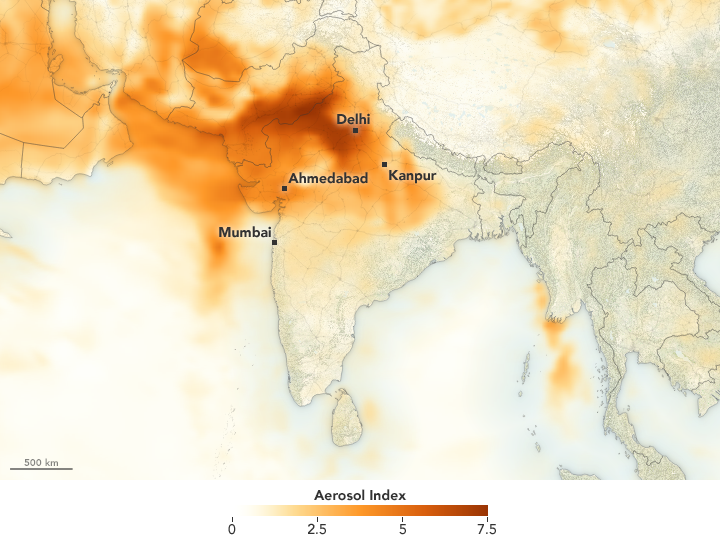 The map above shows aerosols, including dust, over northern India on May 14, 2018, around the time of the second dust storm. The dust is naturally blocked from moving north by the Himalayan mountain range.

In addition to causing accidents and poor air quality, dust aerosols can influence the amount of heat transmitted to Earth‘s surface by either scattering or absorbing incoming sunlight.

"Dust storms and thunderstorms are common in India at this time, but the intensity this year appears to be anomalous," Earth Observatory's Kasha Patel writes. "The unusual weather could have a combination of causes, including extra moisture from a cyclonic circulation over West Bengal colliding with destructive dusty winds. High temperatures in the area also made the atmosphere unstable, fueling thunderstorms and heavy winds."

The unusually high number of lightning strikes was caused by cold winds from the Arabian Sea colliding with warmer winds from northern India, leading to the formation of more clouds than usual.

"Despite the spike in lightning this April, long-term satellite data do not show any strong trends in India," said Richard Blakeslee, an atmospheric scientist at NASA‘s Marshall Space Flight Center. India has long been prone to lightning strikes, which are believed to cause more fatalities than any other natural hazard in the country. 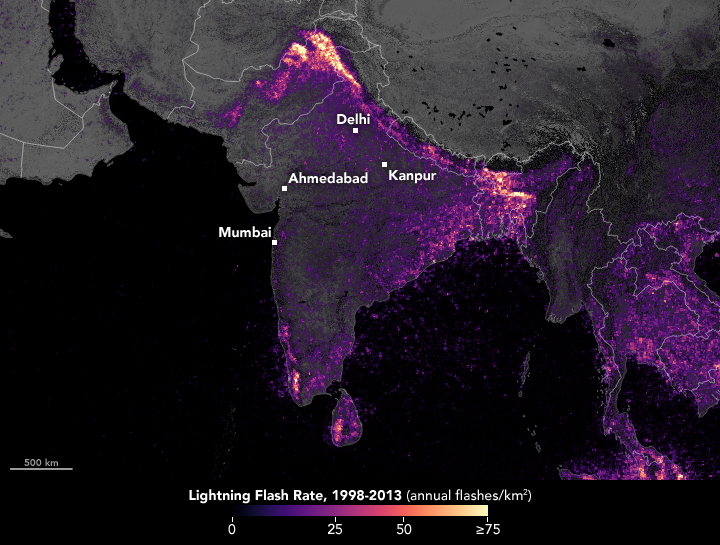 The map above shows the annual average of lightning flashes in India from 1998 to 2013.

Researchers are cautious about the idea that the spring 2018 weather patterns in India are the beginning of a trend.

"Some years happen to be highly active without signaling a longer-term trend," said Dan Cecil, a scientist at NASA Marshall.

For instance, a region near Andhra Pradesh had almost double the normal lightning flash rates in 2010, yet 2011 was almost exactly normal. The following years alternated between being slightly below normal and slightly above normal.

"Only time can show whether such weather patterns develop more often or regularly in the future, or if this was simply a rare, chance event," said Blakeslee.