As early as August 2013, in the middle of this solar cycle’s "double hump" maximum, a Fox News correspondent asked Corey Powell of Discover Magazine about the following coronal hole: 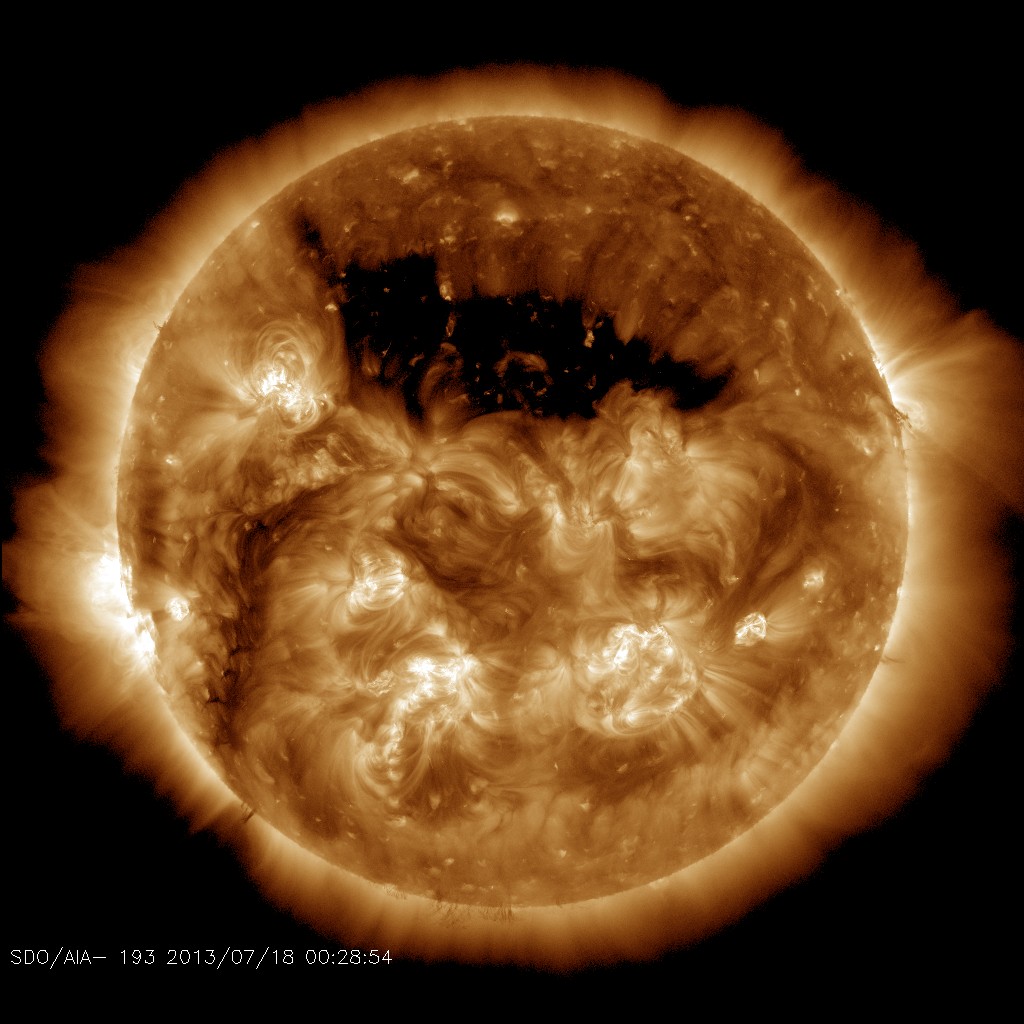 A few other sporadic articles appeared on the Internet over the next couple of years with headlines that included "giant hole" and "massive hole" to describe coronal holes that were indeed much larger than anything seen during the previous solar minimum. Something else was different about them. The handful of large coronal holes in the previous solar cycle appeared in the polar regions of the Sun. Coronal holes in the polar regions are not unusual, but these holes were appearing in the middle of the Sun. Towards the end of May, 2016, the reports about spectacular coronal holes started to appear with regularity. Now they were called "huge," "vast," "giant," and even "monstrous" coronal holes. One U.K. reporter began the title of his article with "The Sun is Ripping Apart!" Not to be outdone, someone else reported on a "‘Death Star’-like coronal hole."

These may not be exaggerations. I have often thought that the coronal holes we are seeing this solar cycle are being underreported. One of my favorites is from October 25, 2016. 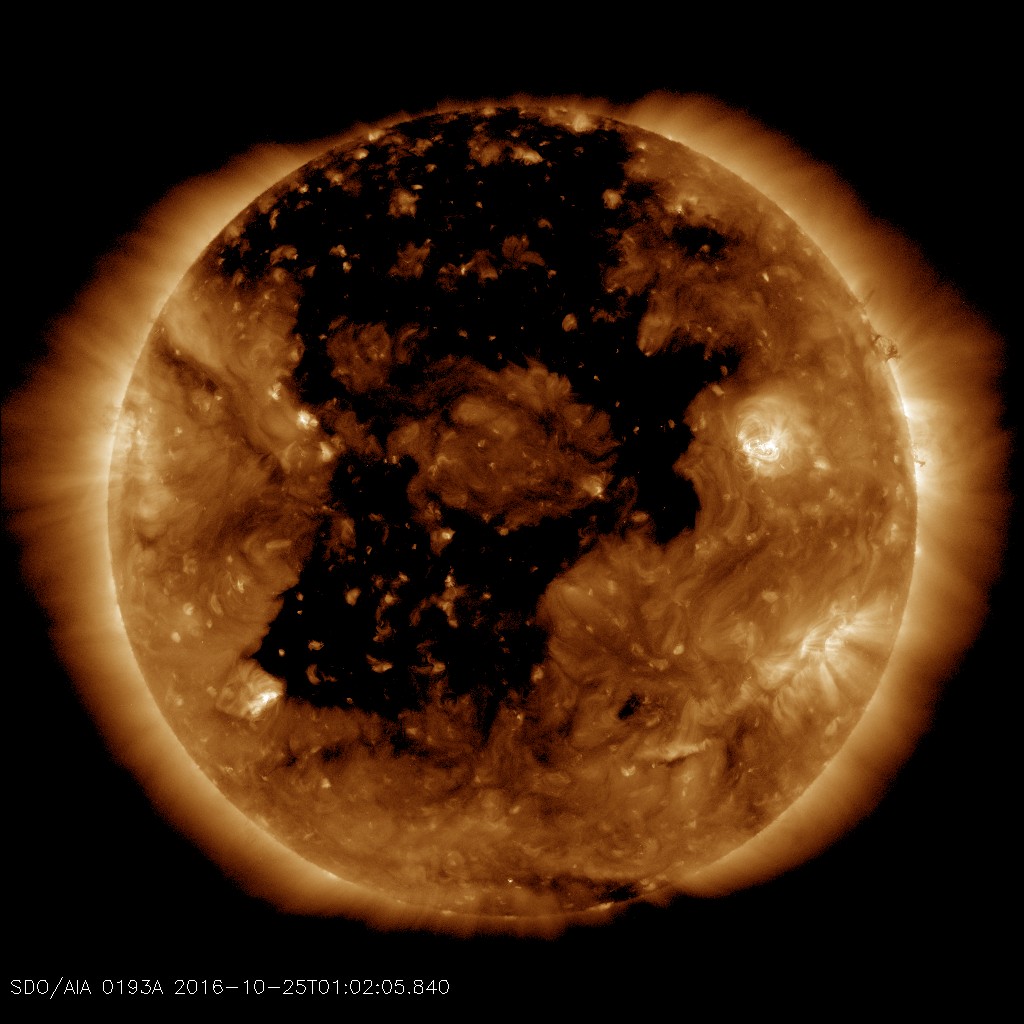 I searched spaceweather.com's "Time Machine" for all of 2007, 2008, and 2009 (all during the extended solar minimum last solar cycle) and nothing in Solar Cycle 23 comes close to this "monstrous" coronal hole. I cannot look at a picture like this without being reminded of an email from an acquaintance who quoted a NASA scientist− in reference to the frequent filament eruptions happening this past solar maximum−as saying something to the effect that the corona was being "ripped" off the Sun. Perhaps we have not observed the Sun long enough to know how unusual these large coronal holes are. Maybe they are extraordinary, maybe not. The subject of this article is something else.

Coronal holes are the source of high speed solar winds. It is widely known that there is an inverse relationship between the solar wind and galactic cosmic rays (GCRs). A strong solar wind normally results in a drop in the GCR flux. The "something extraordinary" referred to in the title of this article is that for the last several days this inverse relationship has gone missing. Here is the current coronal hole: 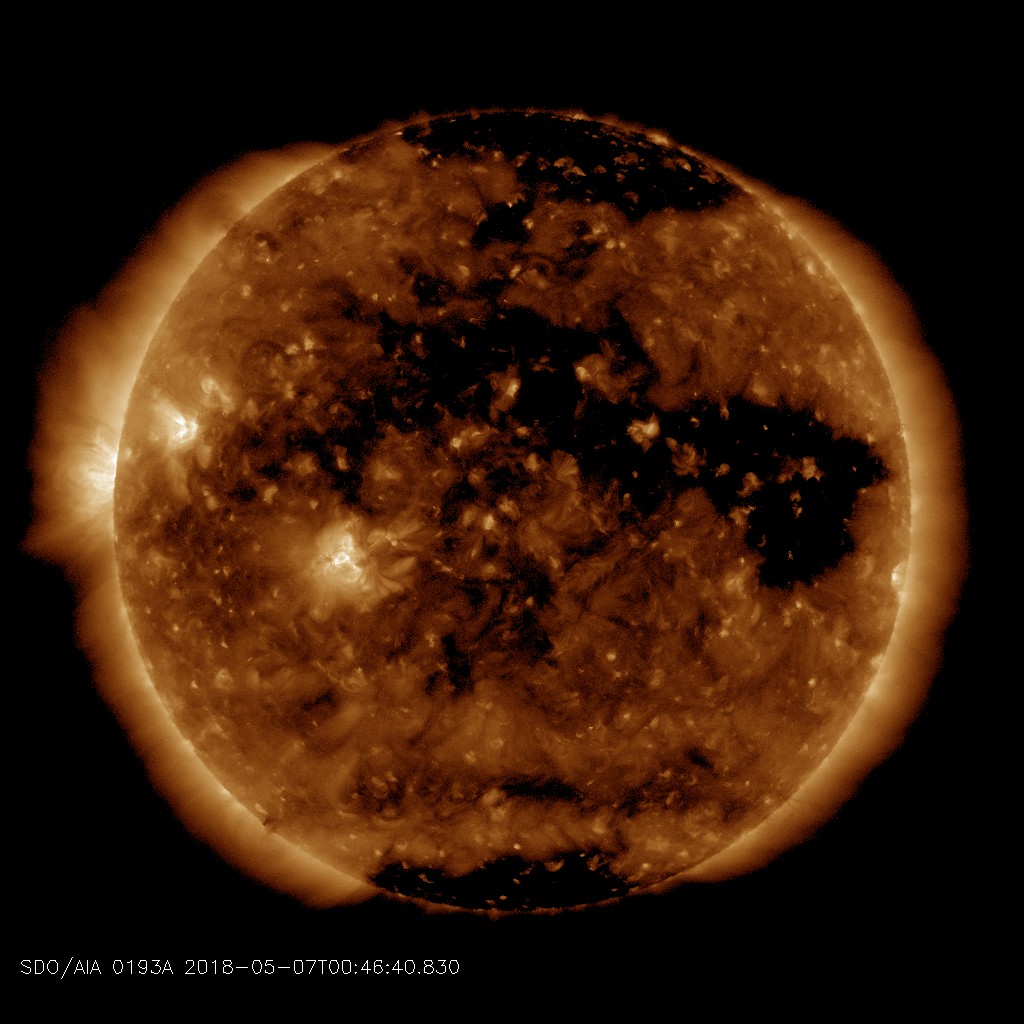 Since last Saturday, May 5, 2018 it has been generating a solar wind well in excess of 600 km/s and as high as 700 km/s. Normally, in the face of such a strong solar wind, GCRs would show a significant drop of around two percent. It has not happened. In fact, GCR’s are actually climbing. I am not a scientist. I am a semi-retired computer programmer, but I am not a casual observer, either. For the past five years I have checked spaceweather.com and the Oulu Cosmic Ray Station in Finland obsessively, as many as five times a day, studying the relationship between solar activity and GCRs. One thing I have noticed along with others is that after a long lull in solar activity, a "proton event" (high solar winds with an elevated proton density) triggers large earthquakes. I actually predicted a "7.0 or higher earthquake" in an email to a dear friend days before the 7.5 earthquake in Mexico on February 16, 2018. I am not bragging (well maybe a little). The point is that there is a large number of casual observers on the Internet whose observations, though outside mainstream science, are not without merit. And for at least the past five years, I doubt very many mainstream scientists have even observed the relationship between the solar wind and GCRs as closely as I have. Here is the GCR chart from Oulu Cosmic Ray Station for the past 30 days:

And here is the yearly chart dating back to 1965 when observations began:

The +5% line represents a GCR count of 6472. The +10% line is 6780. All during these past several days, GCRs have remained at or near their peak for this solar minimum, which is around 6700. Normally, when a solar wind like this one hits earth there is a immediate drop in the range of two percent or down to around 6500, and a recovery time measured in days. It just didn’t happen this time, and I have never seen anything like this.

Were this to continue, things could get interesting. GCRs are clearly related to the extreme rain happening all over the world, and many of us "casual observers" as well as number of mainstream scientists think they are also closely related to an increase in lightning, seismic and volcanic activity, and even tornadoes. Something extraordinary may indeed be happening.