Scientists have released new observations of solar activities, such as Coronal Mass Ejections (CMEs) and cosmic rays, gathered by the Global Muon Detector Network (GMDN) at the Syowa Station in the Antarctic. The team found that high-speed solar wind causes the unusual enhancement of the cosmic ray density by compressing the rear part of the Magnetic Flux Rope (MFR).

Solar activities, such as CMEs, cause geomagnetic storms that affect the Earth's magnetosphere, particularly GPS position, power transmission systems, and radio communication. That's why it's important to understand space weather and its impacts on the planet.

The GMDN has been observing space weather events since 2006 and the Spaceship Earth project is developing a similar observation network. Until now, observations by muon detectors and neutron monitors have been conducted independently.

In February 2018, Professor Chihiro Kato of Shinshu University led the acquisition of simultaneous observations of the neutron monitor and muon detector at Syowa Station to gather bridging data.

Unlike low-latitude regions on Earth, it's possible in polar regions to observe cosmic rays coming from the same direction with a muon detector and neutron monitor due to the weaker deflection by geomagnetism. This is why Syowa Station was selected as the observation site. 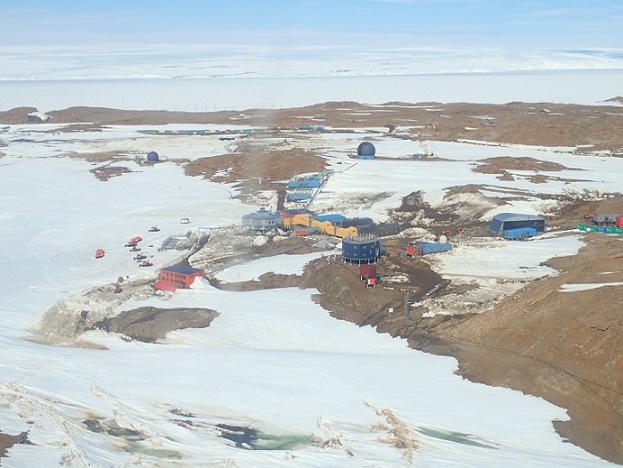 On the CME phenomenon, a large amount of coronal material emitted with a bundle of the solar magnetic field called MFR into the interplanetary space. MRF moves through space while expanding.

The cosmic ray density is low inside of it because it is originally coronal material. When the Earth enters the MFR, cosmic ray counts on the ground lessens in an event called Forbush Decrease.

Usually, when MFR arrives on Earth, the cosmic ray density observed at the ground level rapidly decreases, and then turns to increase, recovering to the original state. However, on this event, the cosmic ray surpassed the original level before the Earth exited the MFR.

This event caught the attention of the researchers because the solar activity is near the minimum and the event's scale is small; it causes a disproportionately massive geomagnetic storm; a high-speed solar wind is catching up the MFR expected to interact with it.

The team concluded that the high-speed solar wind causes the unusual enhancement of the cosmic ray density by compressing the back portion of the MFR locally.

Muon detectors and neutron monitors were recently installed at Syowa Station, in the Antarctic, to observe different types of secondary particles resulting from cosmic ray interactions simultaneously from the same location. Continuing observations will give new insight into the response of muon detectors to atmospheric and geomagnetic effects. Operation began in February, 2018 and the system has been stable with a duty-cycle exceeding 94%. Muon data shows a clear seasonal variation, which is expected from the atmospheric temperature effect. We verified successful operation by showing that the muon and neutron data are consistent with those from other locations by comparing intensity variations during a space weather event. We have established a web page to make real time data available with interactive graphics