A warm front provided the focus for Sunday morning thunderstorms that eventually turned into a bowing line segment across northeastern Indiana into northwestern Ohio, NWS said.

A cyclic supercell impacted Blackford and Jay counties with a long-tracked EF2 tornado and associated damage. The tornado crossed the border into Ohio and ended dissipated in Mercer County. There was also straight line wind damage observed in Wauseon, Ohio, and flooding in some areas.

The long-tracked tornado formed in Delaware County and continued through Blackford and Jay counties, Indiana before reaching Mercer County, Ohio. 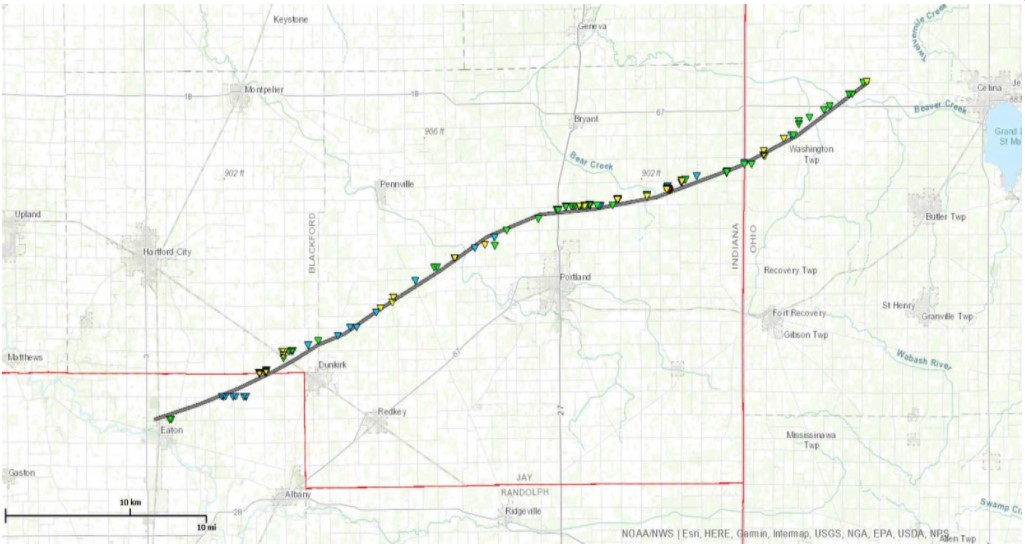 "The tornado path surveyed in western Mercer County is the tail-end of a long track tornado that moved out of Jay County, Indiana," NWS office in Wilmington said in the preliminary report. "The tornado crossed into Ohio (Mercer County) near the intersection of St. Anthony Road and County Road 235. It traveled northeast through Ohio for just more than 12.8 km (8 miles) before terminating in a wooded area north of Carmel Church Road and west of Now Road."

A few pieces of light debris were carried slightly further to the northeast, but the tornado is not believed to have been on the ground east of Now Road, the office added.

The vast majority of the surveyed path in Mercer County contained damage consistent with winds of 96 – 161 km/h (60-100 mph), including scattered tree damage, significant damage or destruction of outbuildings, and minor damage to well-built homes. In all, 20 – 25 different properties were affected by this tornado in Mercer County.

Damage was determined to be most significant at two different locations along the track, with wind speeds estimated at 193 km/h (120 mph), or EF2 on the Enhanced Fujita Scale. The first of these locations was a dairy farm on State Route 49 north of St. Anthony Road. At this location, a small home had its roof completely removed, with the removal and collapse of some exterior walls. It was noted that while some walls were collapsed, toenailing was the primary anchoring mechanism for the roof and walls on this home. Barns and outbuildings on the property were significantly damaged or destroyed, and debris from this location was deposited up to a mile downstream.

The second location exhibiting EF2-rated damage was at a property on Mud Pike Road just east of Township Line Road. Here, a well-built residence had the majority of its roof removed, including the entirety of the garage roof. Sections of the brick facade were removed from the exterior walls of the home, with significant mud splatter on the east-facing exterior wall. A large well-constructed barn adjacent to this home was completely demolished, with debris thrown about a mile downstream of its source location.

Throughout its track through Mercer County, this tornado exhibited a large and relatively uniform width, with damage observed that indicate a width of near or slightly greater than 0.5 km (0.3 miles). Some minor damage was even observed outside of this estimated width. Downstream of some of the affected properties, debris fields were observed to be long, wide, and relatively uniform.

The second EF2 tornado in Ohio hit the city of Celina, also in Mercer County after law enforcement observed a funnel cloud near the intersection of Main Street and Schunk Road. Just to the northeast of this report is where it appears the tornado first touched down, where multiple tree limbs were knocked down between Main Street and W Bank Road.

"It is believed that the tornado then skirted Grand Lake St. Marys, producing minor tree and structural damage near the corner of Lake Shore Drive and Elmgrove Avenue. The tornado then likely moved back over a small portion of Grand Lake St. Marys before knocking down a fence and a few small trees at the back parking lot of Wendy's on E Market Street. A one-story home on Vine Street also had shingles removed from about 10% of its roof, "NWS said.

Further east on E Market Street, the tornado intensified as it impacted Lakeshore Auto Sales and completely destroyed its roof. Along Lake Street, several large branches were knocked down on one property, with significant debris splatter on the east-facing side of a home along with some removal of siding. Further east on E Market Street, another business had a significant portion of its roof removed, and windows at the front of the business were broken.

Onto the 1100 block of E Livingston Street, tree damage was common and several of the homes also exhibited minor roof damage. One of the homes also had one large hardwood tree knocked down onto its second floor, producing significant roof damage. To the northeast, an outbuilding associated with a business on Grand Lake Road was completely destroyed. On the other side of Grand Lake Road, significant debris wrapped around a fence on Montgomery Field. Trees were also uprooted on adjacent May Street.

Businesses along Havermann Road were also affected, most notably C-Town Wings where the front windows were blown out and the Dollar General which sustained considerable structural damage including roof collapse and exterior wall failure. Observed damage from the Crown Equipment Corporation to the Dollar General was consistent with EF2 tornadic winds.

Several businesses within a strip mall along Havermann Road also sustained some damage, particularly a sports store where the front doors were blown in and a portion of the roof collapsed into the store.

Damage to the northeast of the strip mall became more sparse, however, some trees were downed near the intersection of Howick Road and Riley Road. The end of the tornado appears to have occurred near the 8000 block of Riley Road.

The third confirmed tornado in Ohio touched down between Richie Drive and Interstate 70 at 18:16 local time and immediately overturned a semi-trailer.

Damage was then observed approaching Ritchie Dr to Ritchie Brothers Auctioneers with a hole in the roof and some siding removed. The tornado then progressed southeast into South Vienna with multiple tree limbs down across E North Street and N East Street with some minor structural damage to roofs also occurring. Damage then continued towards the southeast along E Main Street.

The tornado then strengthened as it crossed Longs Court and headed east. Several trees were then snapped around half way up the trees themselves with at least three trees uprooted towards the eastern city limits of South Vienna. East of where E Main Street merges with E National Road, structural damage was observed with a garage slightly shifted off of its foundation. The tornado then continued southeast with minor tree damage observed where Wilson Road and S Houston Pike meet. Damage then continued on Markley Road just south of E National Road in the form of mostly tree damage. Most trees only had limbs down with two being uprooted.

The tornado then strengthened with structural damage occurring just south of E National Road on Roberts Mill Road. A trailer attached to a tractor was then tipped on its side. A barn on the property then lost the west facing wall with some of the north and south walls also removed. The east facing wall was completely removed from the structure. Around 30% of the roof was removed with pieces of the barn blown into a cornfield towards the east. Observed damage from the barn was consistent with EF1 tornadic winds. The survey then continued into the cornfield were corn was observed laid down in different directions. The tornado then lifted as the track ended in the cornfield.