Violent thunderstorms swept through parts of New South Wales, Australia on November 5 and 6, 2017, producing strong winds, large hail, heavy rain and high elevation snow. The storms caused widespread damage and sent at least 2 people to a hospital. This is just the beginning of a few months of the storm season, authorities said, asking people to protect their properties and take extra care while on the road during wet conditions. This weather system is now moving toward New Zealand where severe weather warnings are already in place.

NWS State Emergency Service said it responded to more than 400 calls for assistance across the state as trees feel, cars were damaged and power lines went down.

Two people were injured after the roof of a community center in the Hunter Valley town of Kurri Kurri, near Cessnock, collapsed at 14:00 local time Monday, November 6. Both were taken to Maitland Hospital with non-life-threatening injuries. 70 emergency calls have been made from Kurri Kurri area alone, SES said.

Residents have reported downed trees and powerlines and photos from the town show several damaged buildings and cars in the wake of the storm, ABC reported.

"I spent 10 years at sea and I’ve never seen anything like it. There were hailstones coming in under the doors. You could barely see out the window," Mark Roberts told News.com.au.

Horrid day for Kurri Kurri. Community centre (and Mazda 3) destroyed and the Kurri Kurri Hotel has hole in the roof @dailytelegraph pic.twitter.com/72Wbt51Elp

Damaging golf-ball-sized hail was reported north of Wollongong and at Narrabri. Damaged buildings and uprooted trees were also reported in the Central Coast suburb of Toukley on Monday, and in Tregeagle, near Lismore on Sunday. Tregeagle residents said the damage from the storm was 'massive,' according to ABC.

"I could hear the roof tiles breaking with the force of the wind and the size of the hail. I've never seen anything like it," Stephen Butcher from Tregeagle said. Another Tregeagle residents said it was the most severe hailstorm he had seen in 30 years of growing berries in the area.

Temperatures in Sydney dropped to 17 °C (62.6 °F) on Saturday, November 4 and rose to just 19 °C (66.2° F) on Sunday, making this weekend one of the coldest November weekends in years. Warmer temperatures are expected next week.

Some 7 cm (2.7 inches) of snow was reported at Perisher ski resort on Monday, just three weeks before summer, and more is in the forecast. However, Weatherzone said the snowfall was not unusual for this time of year and said the unexpected fall can even happen in December. The snow started falling around 07:00 local time Monday, after the temperatures dropped to 0 °C (32 °F) overnight.

"It's a real winter wonderland here in Perisher today and we can't believe how much snow has fallen for this time of year, it's amazing," Melisha Liegl from Perisher said.

"We are asking people to protect their properties because this is just the start of a few months of the storm season," SES spokeswoman Sue Pritchard said. 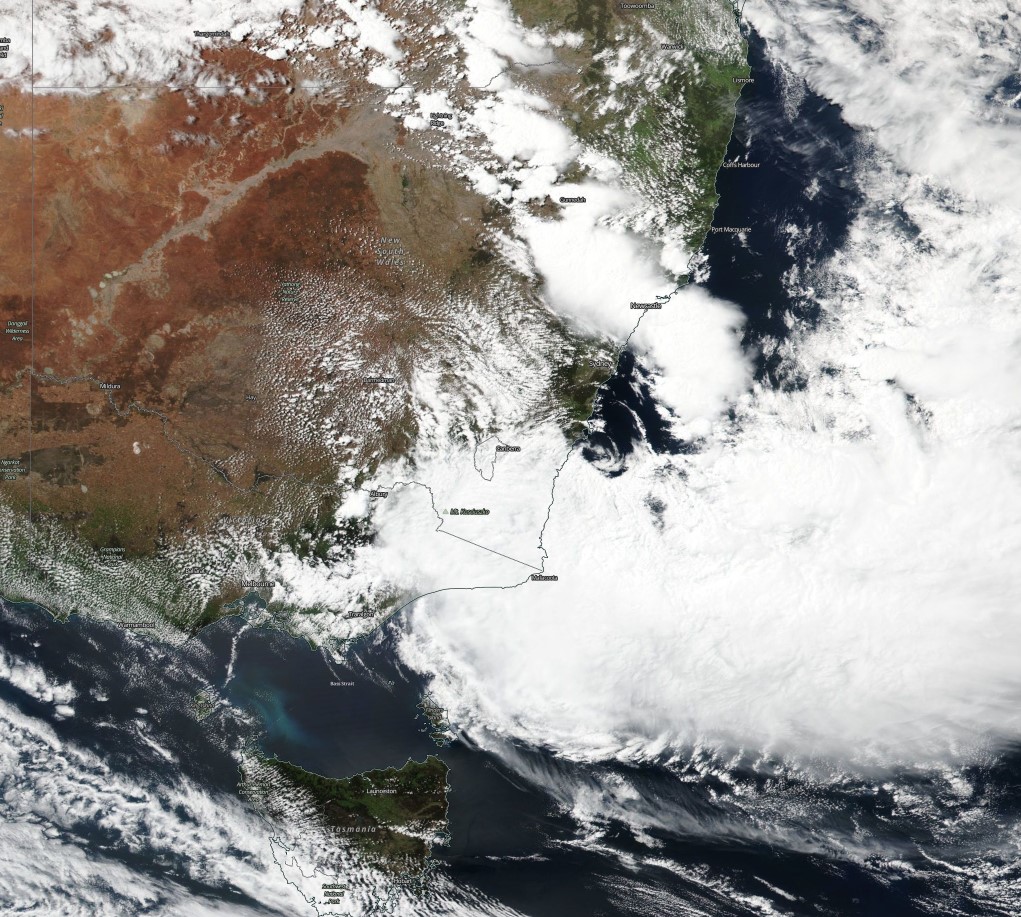 After causing widespread damage across New South Wales, this weather system is now moving toward New Zealand and is expected to reach the country on November 7. Severe weather warnings are already in place.

This event is expected to cause significant disruption to travel and is likely to damage infrastructure such as power lines and roads.