As of early October 6, 2017, Tropical Storm "Nate" is blamed for the deaths of at least 22 people, 15 in Nicaragua and 7 in Costa Rica. However, there are 15 people still missing in Costa Rica and the death toll is expected to rise. The storm hit Nicaragua and Honduras on Thursday and is expected to hit or pass very near the Yucatan Peninsula before it enters warm waters and rapidly strengthens on its way toward US Gulf Coast.

The storm made landfall in Nicaragua just a couple of hours after it officially reached tropical storm strength, but the country was already soaked by near-constant rain over the past 14 days, which left areas flooded and rivers swollen.

Nicaragua's vice president Rosario Murillo said Thursday that at least 15 people have been killed. He didn't elaborate on many of the deaths but noted that three people who worked for the Health Ministry were swept away by a flooded canal in Juigalpa.

This general motion is expected to continue during the next couple of days with a significant increase in forward speed.

On the latest forecast track, Nate will continue moving over eastern Honduras during the next couple of hours and exit into the northwestern Caribbean Sea. Its center is then expected to move near or over the northeastern tip of the Yucatan Peninsula and adjacent islands late Friday and move into the Gulf of Mexico on Saturday.

Strengthening is likely once the center moves over the northwestern Caribbean Sea and Nate could be near hurricane strength as the center approaches the Yucatan Peninsula.

This storm is expected to hit the US Gulf Coast late Saturday/early Sunday somewhere near the Louisiana-Mississippi border. Although this could still change, the impact will be widely felt throughout the region. As opposed to Harvey, Nate is not expected to stall over the coastline. 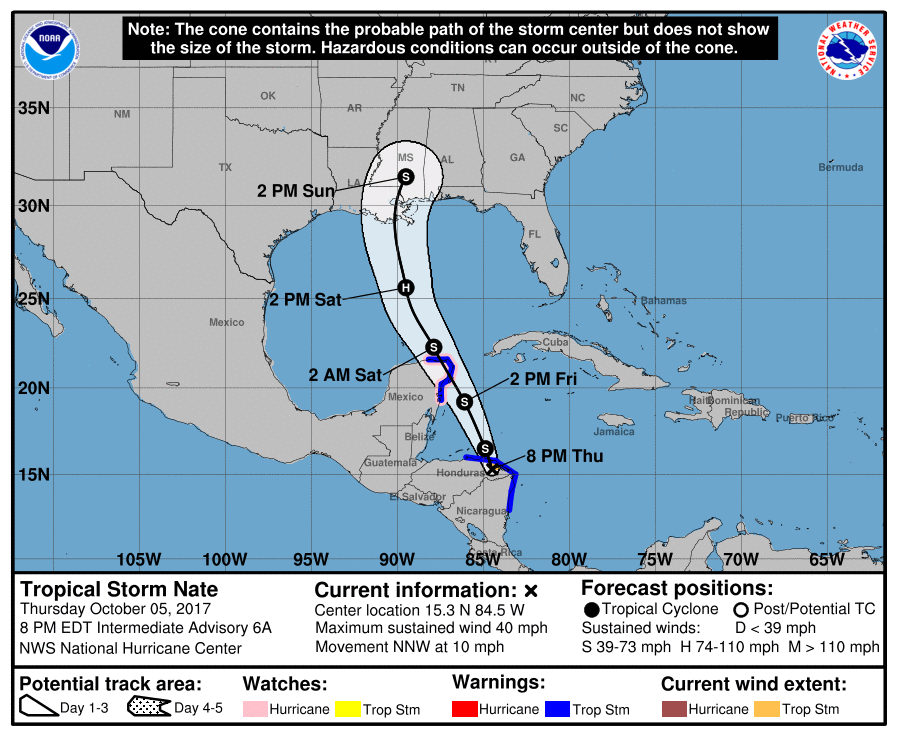 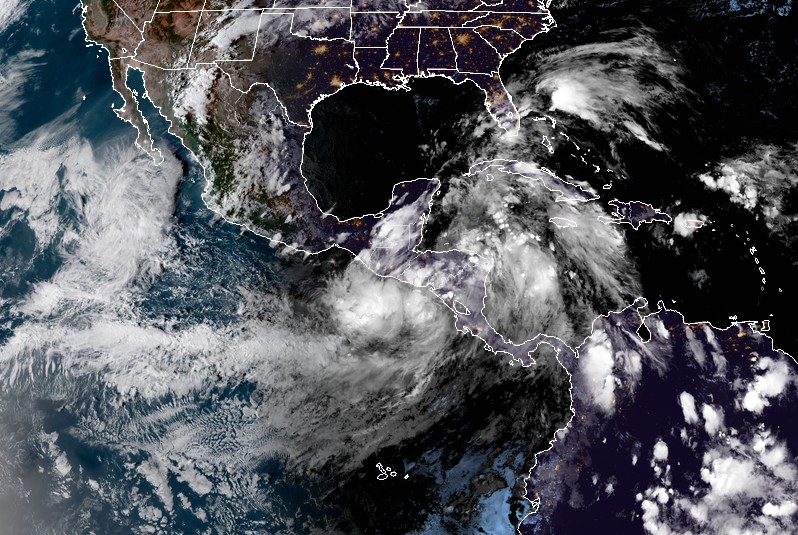 A Hurricane Watch means that hurricane conditions are possible within the watch area.

Interests elsewhere in Honduras, the Bay Islands, western Cuba, the Yucatan Peninsula, and the northern coast of the Gulf of Mexico should monitor the progress of Nate.  A Hurricane Watch and a Storm Surge Watch will likely be required for portions of the northern Gulf Coast Thursday night or Friday morning (EDT).

Nate is expected to produce the following rain accumulations into Saturday:

Heavy rainfall will occur over a wide area, including locations well away from the center along the Pacific coast of Central America. Rainfall across all of these areas may produce life-threatening
flash floods and mudslides.

A storm surge will raise water levels by as much as 30 to 90 cm (1 to 3 feet) above normal tide levels along the immediate coast in areas of onshore winds on the Yucatan Peninsula and the adjacent islands. Near the coast, the surge will be accompanied by large and destructive waves.

Swells generated by Nate are affecting portions of the coast of Nicaragua and will begin to affect other land areas around the northwestern Caribbean during the next day or two. These swells are likely to cause life-threatening surf and rip current conditions.