Tropical Storm "Doksuri," known in the Philippines as Maring, formed Tuesday, September 12, 2017, after moving over the Philippines as a tropical depression. While slowly moving over the Philippines, this storm dumped heavy rain and caused landslides in and around capital Manila, forcing schools, government offices and businesses to shut down. It is blamed for at least 3 deaths and 13 missing people. Doksuri is moving WNW while strengthening and is expected to pass very close to China's Hainan and make landfall, shortly after that, in northern Vietnam as a Category 1 hurricane equivalent on September 15.

Maring, now internationally known as Doksuri, hit the eastern town of Mauban while still a tropical depression late September 11 and September 12 (UTC), before moving northwest across the main island of Luzon and passing just beside Manila.

According to GMA, Mark Timbal, spokesman for the National Disaster Risk Reduction and Management Council, said local governments had ordered the evacuation of residents from low-lying, coastal and landslide-prone areas. However, at least 3 people have been killed and 13 are missing. Most of the dead and missing were poor people forced to live in identified "danger zones" despite government warnings of the risks they face during storms, DMA said.

Environmental analysis indicates the system is in an area of low vertical wind shear, good equatorial outflow and is drifting over very warm sea surface temperatures.

The favorable environment will allow for steady intensification, peaking at 148 km/h (92 mph) by 09:00 UTC on September 15. This would place Doksuri on the upper edge of Category 1 hurricane equivalent on the Saffir-Simpson Hurricane Wind Scale.

Doksuri is expected to continue its WNW track in the South China Sea, pass just south of Hainan and reach the Gulf of Tonkin within 48 hours. Landfall is expected in northern Vietnam late September 15 / early September 16 (UTC).

Meanwhile, a much bigger tropical cyclone – Typhoon "Talim" –  is swirling northeast of Doksuri and is now located near Taiwan. Its current forecast track takes its center close to Shanghai, China and then toward Kyushu, Japan where landfall is expected late September 16 / early September 17 as a Category 2 hurricane equivalent on the Saffir-Simpson scale.

To get a better picture, take a look at today's image of both systems below: 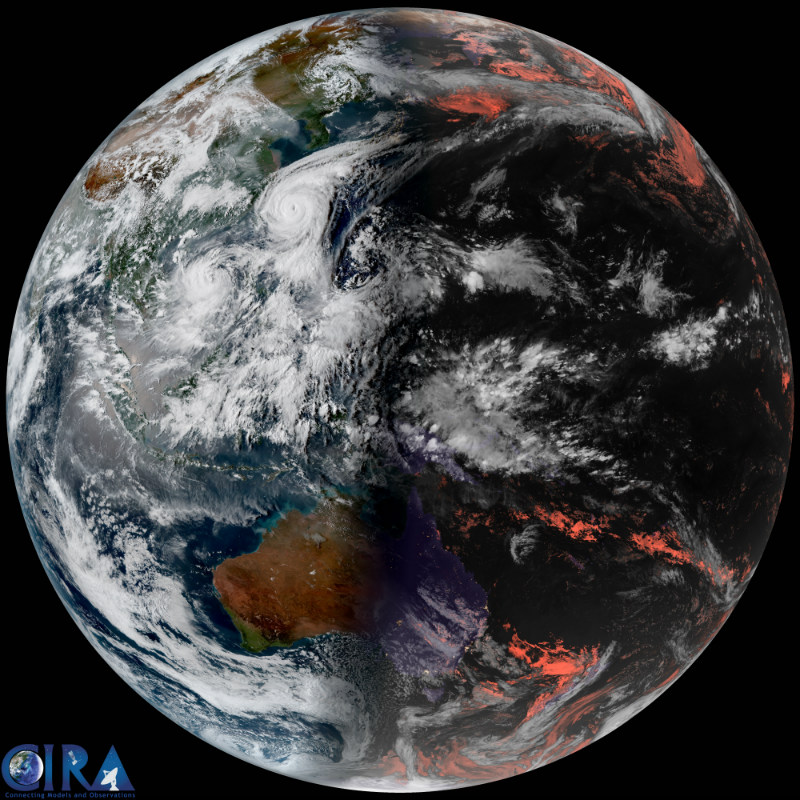 Both these storms are very dangerous; wind damage, floods and landslides are expected.