A total solar eclipse will take place on August 21, 2017, starting over the Pacific Ocean at 15:46 UTC (08:46 PDT) and moving inland over the continental United States. Although 14 US states will witness the total solar eclipse, regions seeing, at least, a partial eclipse include western Europe, northeast Asia, northwest Africa, Canada, northern South America, and parts of Pacific, Atlantic and Arctic ocean.

A solar eclipse is a celestial event in which the Moon passes between the Sun and Earth and blocks all or part of the Sun for up to about three hours, from beginning to end, as viewed from a given location. Although total solar eclipses are visible somewhere on Earth about every 18 months, it is rare for the path of totality to cross exclusively through the continental United States, from coast to coast. That last happened in June 1257 and the next time will be in January 2316. Another solar eclipse will be visible in the continental United States in April 2024, but it will not pass over as many places in the United States as the 2017 event.

Over the next hour and a half, it will cross through 14 states, providing more than two minutes of darkness in the middle of the day. Those states are Oregon, Idaho, Wyoming, Montana, Nebraska, Iowa, Kansas, Missouri, Illinois, Kentucky, Tennessee, Georgia, and North and South Carolina.

Its longest duration will be near Carbondale, Illinois, where the Sun will be completely covered for two minutes and 40 seconds. 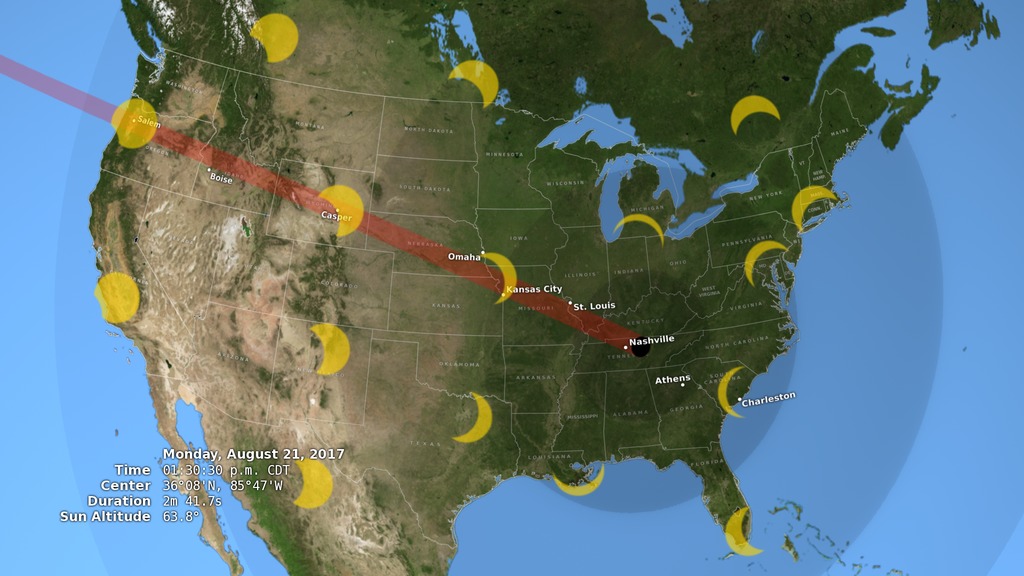 Viewers around the world will be provided a wealth of images captured before, during, and after the eclipse by 11 spacecraft, at least three NASA aircraft, more than 50 high-altitude balloons, and the astronauts aboard the International Space Station – each offering a unique vantage point for the celestial event.

Eclipse Live: Video streams from NASA Television and locations across the country.

If you ever wondered how a total solar eclipse looks from an airplane, or why many people turn solar eclipse chasers once they experience the totality, take a look at the video below: