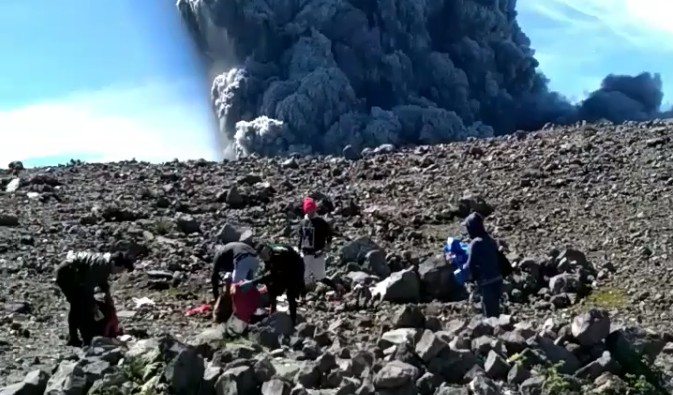 Mr. Sutopo Purwo Nugroho, a spokesperson for BNPB (National Agency for Disaster Management), said the volcanic ash was heading toward Batu Sangkar. Sutopo said that the volcano remains at alert level 2 (waspada) and reminded everybody to respect the exclusion zone of 3 km (1.9 miles) around the summit.

"We don't expect any disaster, but we have to be alert," BPBD West Sumatra said.

Media reports mention at least 16 climbers were near the summit when the first eruption took place. 8 of them had to be rescued. There are no reports of injuries.

Gunung Marapi, not to be confused with the better-known Merapi volcano on Java, is Sumatra's most active volcano. This massive complex stratovolcano rises 2000 m above the Bukittinggi plain in the Padang Highlands. A broad summit contains multiple partially overlapping summit craters constructed within the small 1.4-km-wide Bancah caldera. The summit craters are located along an ENE-WSW line, with volcanism migrating to the west.

More than 50 eruptions, typically consisting of small-to-moderate explosive activity, have been recorded since the end of the 18th century; no lava flows outside the summit craters have been reported in historical time.