Genomic research associated with the Sima de los Huesos archaeological site and morphological analysis of hominin fossils from across Europe have together invalidated the possibility that Homo heidelbergensis is ancestral to Modern Humans.

What happens when paleoanthropologists discover that their only candidate for a human ancestor in Africa or Europe gets discounted through both genetic investigations and comparative fossil studies?

Judging by the lack of any media furore I think it is safe to say that the answer to the question above is ‘not much’ because the situation arose in 2016 and yet the media remains mostly silent on the matter of the profound implications that have occurred. There is also more to this story than just a goodbye to H. heidelbergensis. Matthias Meyer of the Max Planck Institute for Evolutionary Anthropology headed a team of scientists undertaking a detailed analysis of both nuclear and mitochondrial DNA from hominin fossils associated with the Sima de los Huesos archaeological site in Spain. One of the most astonishing results was a revealed split between Homo sapiens and Homo neanderthalensis far earlier than had ever been considered, potentially over 700Kya rather than close to 400Kya. With Meyer’s announcement came the end of an era in human evolutionary theories.

There are those scientists that advise caution when fundamental understandings rely solely on genetic studies, divorced from physical analysis of fossils. In this situation, however, there has already been a relevant fossil study just a couple of years earlier, carried out by scientists from Indiana University and headed up by a well-respected evolutionary biologist, Aida Gómez- Robles. The Indiana University’s project focussed on comparative analysis of European fossil teeth and jawbones, their conclusion was that all of the fossil hominins in Europe were either Neanderthals or directly ancestral to Neanderthals. We have to understand that as respective groups in Africa match European hominin populations this revelation also discounted known African hominins as ancestors of modern humans. The morphological research provided one new shock – the split between Homo sapiens and Neanderthals had apparently begun as early as one million years before present.

With the dismissal of all known suspects in the list of possible offenders, modern humans were left lacking a possible direct ancestor in the known records. Not only this but they were found to have been alone on their evolutionary journey for several hundred thousand years longer than scientists had dared to speculate. Further related revelations soon arose, this time coming from a handful of ancient bones uncovered at a cave site in Siberia, fossils associated with a new human species called Denisovans. Acclaimed geneticist Svante Pääbo of the Max Planck Institute revealed that genetic studies confirmed once again that Homo sapiens had a very early divergence date from other human forms, his team having found that “Denisovans began to diverge from modern humans regarding DNA sequences about 800,000 years ago.”

Before 2016, the highly respected paleoanthropologist Maria Martinón-Torres of University College London stated in no uncertain terms that if the scientists wanted to find our last ancestor shared with other advanced Homo forms we “should now be looking for a population that lived around 700,000 to 900,000 years ago.” The statement issued by Martinón-Torres left the scientific world with an enormous conundrum. If our immediate ancestors can’t be found in Europe or Africa, where else should we be looking for them?

The first possible answer to this ‘where to look’ question came in the form of an announcement by Chinese scientists claiming they had identified modern human fossil remains ranging up to 180,000 years in age, as well as fossils from other mysterious hominin forms. The Chinese paleoanthropologists suspected that some of the recovered fossils might even be from the mysterious Denisovans. Could modern humans have in fact emerged first in East Asia? It certainly began to look like this might be the case, but my independent investigative research disagrees, I believe that my work almost conclusively places the first Homo sapiens in Australia.

In 1982, Professor Alan Wilson and his understudy, Rebecca Cann, two of the most renowned evolutionary scientists of the modern age, discovered compelling evidence for an Australasian genesis for modern humans. These controversial findings never emerged in any of their academic papers, in fact they only appear in a short transcript taken from a private conversation included in a book by two other scientists (early 1980’s). Silence does not change facts, and the fact remains that there is compelling evidence pointing towards Australasia as the first home for modern humans, so much data exists that it eventually led to my controversial new book The Forgotten Exodus: The Into Africa Theory of Human Evolution. My research colleagues and myself have uncovered overwhelming evidence that puts the first Homo sapiens in Australasia, and not only them but several other advanced hominin forms.

It would be easy to dismiss all of this work out of hand, if not for the fact that my book’s perturbing claims are so well referenced, in every case they are based on or supported by peer-reviewed studies and statements given by leading academics. Could it be that the year 2016 will come to be known as the year that the Out of Africa paradigm died?

If 2016 becomes associated with the end of one scientific paradigm then surely 2017 may yet become related to a new model for human origins, one that I am proposing and have given the name ‘Into Africa’. My Into Africa theory can perhaps be best understood as an adaptation and extension of the existing ‘Out of Australia Theory’ formulated by two of my Australian collaborators, Steven and Evan Strong. If these profound claims are true, what does this mean for our understanding of who we are? Where does the road go from here?

These additional questions I have proposed can only be addressed after the existing evolutionary paradigm is declared dead.

Bruce R. Fenton is the author of the revolutionary human origins e-book series, The Forgotten Exodus. He was born in the historic English town of Cheltenham, England. He graduated from Anglia Ruskin University in 2002, having studied Information Systems. Fenton has earned the respect of his peers and made a name for himself in the research fields of ancient mysteries and human consciousness. A world traveler and public speaker, Fenton’s research activities have also been featured in the UK’s Telegraph Newspaper. He was recently honored to receive an invitation to appear as a guest presenter on a popular Science Channel show. Fenton is a current member of both the Palaeoanthropology Society and the Scientific and Medical Network. 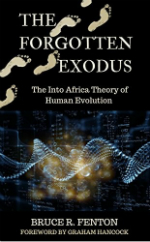 The Forgotten Exodus: The Into Africa Theory of Human Evolution

A short and fact-filled e-book packed with astonishing scientific information that erases the Out of Africa model and fills the gap with an entirely revolutionary replacement, human evolution in Australasia and a later colonisation of the planet from there.

The book comes highly recommended, with a foreword by the world renowned ancient mysteries author, Graham Hancock (whose book Magicians of the Gods is currently on the best-seller list).