Tropical Cyclone 16P, soon to be named Cook, is wreaking havoc on Vanuatu today, April 8, 2017. The cyclone is expected to intensify over the coming days on its way to New Caledonia. It comes at the end of the official cyclone season, which runs from November to April.

TS #16P, west of #Fiji, is wreaking havoc on #Vanuatu & expected to intensify into a Category 2 Cyclone (#Cook) en route to #NewCaledonia. pic.twitter.com/e0hFlkVWfg

Upper level analysis indicated the system is currently in an area of low to moderate vertical wind shear and excellent poleward and equatorward outflow. The system is tracking through an area of high sea surface temperatures (29 – 30 °C / 84.2 – 86 °F) under the steering influence of two ridges, one to the east and one to the west. These two ridges will steer the storm generally to the south and will remain the primary steering feature over the next couple of days.

Favorable environmental conditions are expected to persist for the next 48 – 72 hours resulting in likely near-term rapid intensification followed by steady intensification to a peak of 167 km/h (103 mph). This would make Cook a major, Category 3 system on the Saffir-Simpson Hurricane Wind Scale. The system is expected to begin extratropical transition in about 96 hours (4 days) and complete it by about 03:00 UTC on April 13. 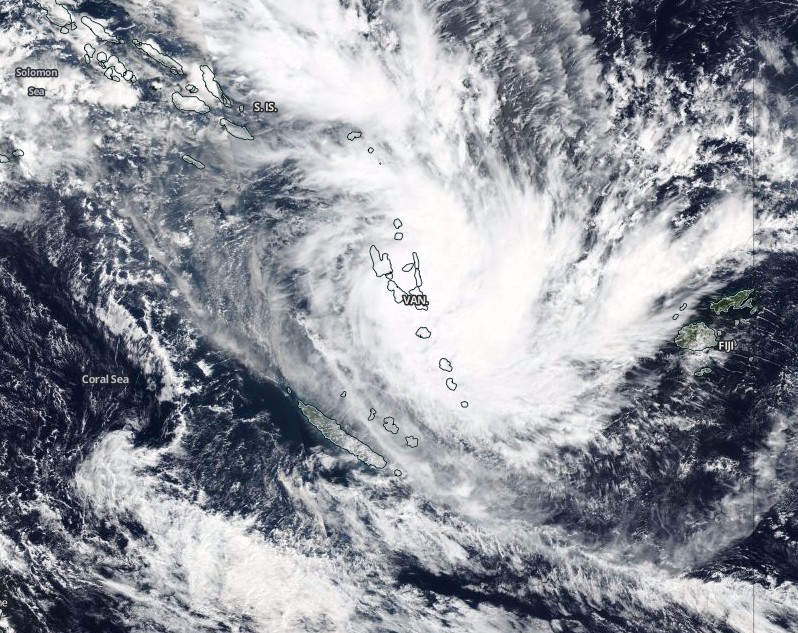 According to current forecast tracks, 16P will reach category 1 shortly after it moves away from Vanuatu.