An outbreak of Cerebrospinal Meningitis in Nigeria has claimed 336 lives since mid-December 2016. Meningitis outbreaks are currently reported in five states (Zamfara, Katsina, Kebbi, Niger and Sokoto) in northwestern and north-central zones of Nigeria. An epidemic was declared last week.

As of April 3, 2017, an outbreak of meningitis epidemic has killed 336 people, mostly children agest 5 to 14, the Nigeria Centre for Disease Control reports. On the same day, the total number of suspected cases soared to 2 997.

Zamfara, Katsina and Sokoto states account for about 93% of the cases reported, it said. The most common serotype is Neisseria Meningitidis serotype C (Nm C), with 83% of samples tested.

The center warned there is a risk of international border transmission; Zurmi LGA in Zamfara State, Gada LGA in Sokoto State and Jibia LGA in Katsina State share borders with the Niger Republic.

Chikwe Ihekweazu, head of the Nigeria Centre for Disease Control, said that efforts to curb the meningitis C outbreak are hampered by a worldwide shortage of vaccine. He told journalists that the World Health Organization has delivered 500 000 doses of vaccine, but an estimated three million are needed just in Zamfara, the worst-hit.

Nigeria lies in the "meningitis belt" of sub-Saharan Africa. There are 26 countries with high epidemic risk in the belt, but Nigeria has some of the highest incidences. The outbreaks peak in the dry season in certain states due to the low humidity and dusty conditions and usually end as the rainy season approaches, Ihekweazu said.

"This is a tough disease, especially during this period, and it is associated with overcrowding, understanding the living conditions in the country, people must keep their building ventilated," he said.

According to the WHO, meningococcal disease is potentially fatal and should always be viewed as a medical emergency. Antibiotic treatment must be started early in the course of the disease, and empirically prior to the diagnostic test results. Several antibiotic choices are available, including third-generation cephalosporins.

It is transmitted person-to-person by close contact with respiratory secretions or saliva. It is fund worldwide, but the highest incidence is in the "meningitis belt." 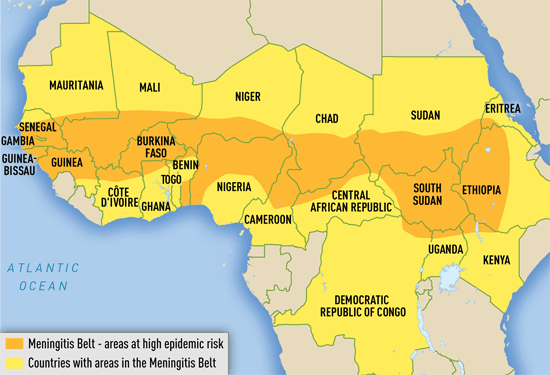 Areas with frequent epidemics of meningococcal meningitis. Credit: WHO

In this region, Meningococal disease is hyperendemic, and periodic epidemics during the dry season (December–June) reach up to 1 000 cases per 100 000 population. By contrast, rates of disease in the United States, Europe, Australia, and South America range from 0.3 to 3 cases per 100 000 population per year. Although most common in the African meningitis belt, meningococcal outbreaks can occur anywhere in the world. Serogroup A predominates in the meningitis belt, although serogroups C, X, and W are also found. At any time, 5%–10% of the population may be carriers of N. meningitidis.

Outside the meningitis belt, infants have the highest rates of disease. In meningitis belt countries, high attack rates are seen up to 30 years of age. Risk for travelers is highest in people visiting meningitis belt countries who have prolonged contact with local populations during an epidemic. The Hajj pilgrimage to Saudi Arabia has also been associated with outbreaks of meningococcal disease in returning pilgrims and their contacts.

The worst outbreak of meningitis in Nigeria took place in 1996, when almost 12 000 people died from the disease.