Icelandic Met Office has detected a strong and shallow M4.2 earthquake in the center of Katla caldera on January 26, 2017. The quake was followed by M3.0 and a series of smaller earthquakes. In total, 28 earthquakes were registered under Katla since late Wednesday, January 25.

The quakes follow a wave of increased activity in the past couple of weeks. On Monday and Tuesday, January 23 and 24, the volcano registered several large earthquakes, following a wave of activity at the beginning of January, IcelandMag reported.

On Monday, January 23, IMO registered two M3+ earthquakes (M3.0 and M3.3) in the eastern part of the caldera, followed by a large swarm of smaller quakes. This activity was followed by a M3.1 earthquake on January 24.

The volcano is under close supervision and there are no signs of increased volcanic activity, IMO said.

According to Claude Grandpey of the Volcanoes and Glaciers, the very shallow depth of the M4.2 earthquake (100 m / 328 feet) suggests that the event was caused by the glacier itself or by movements of hydrothermal fluids. "It is unlikely that it was volcano-tectonic," Grandpey said.

On September 29, 2016, an intense seismic swarm started under the volcano and intensified on September 30 with several M3+ earthquakes. The Aviation Color Code was raised to Yellow, the second highest level on a four-color scale. On October 3, IMO stated that the seismic swarm was the largest one in decades, though it appeared to be over.

20 eruptions have been documented at Katla between 930 and 1918, at intervals of 13 to 95 years. Since the last eruption took place in 1918, Katla is long overdue for an eruption.

This volcano is known for strong eruptions, with Volcanic Explosivity Index mostly between 4 and 6 (on a scale of 0 to 8).

Its eruption could pose a threat to civilians due to glacial flooding and significant ash generation. 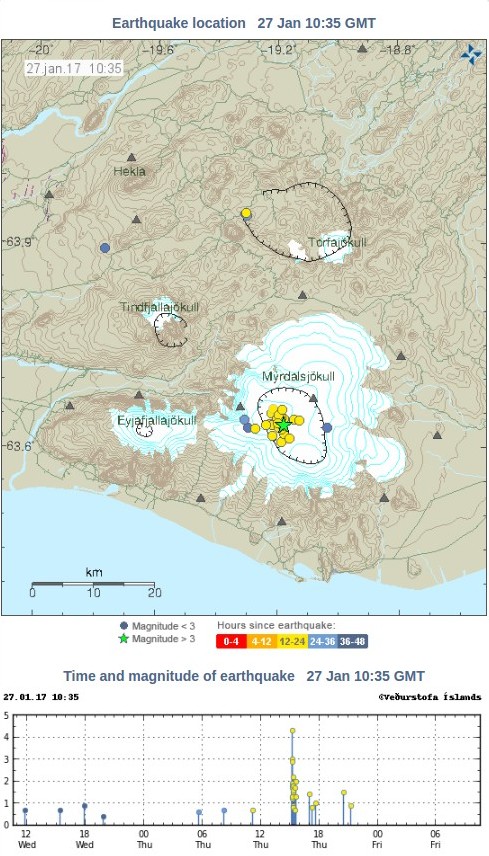 Katla volcano, located near the southern end of Iceland's eastern volcanic zone, is hidden beneath the Myrdalsjökull icecap. The subglacial basaltic-to-rhyolitic volcano is one of Iceland's most active and is a frequent producer of damaging jökulhlaups, or glacier-outburst floods.

A large 10 x 14 km subglacial caldera with a long axis in a NW-SE direction is up to 750 m deep. Its high point reaches 1380 m, and three major outlet glaciers have breached its rim.

Although most historical eruptions have taken place from fissures inside the caldera, the Eldgjá fissure system, which extends about 60 km to the NE from the current ice margin towards Grímsvötn volcano, has been the source of major Holocene eruptions.

An eruption from the Eldgjá fissure system about 934 CE produced a voluminous lava flow of about 18 cu km, one of the world's largest known Holocene lava flows.