Two strong earthquakes which rattled central Italy on October 26, 2016, were not aftershocks of the devastating M6.2 August tremor, but rather the product of a new earthquake, Italian experts announced. EMSC registered more than 220 aftershocks over the next 48 hours.

A strong and shallow M6.1 earthquake hit central Italy on October 26, at 19:18 UTC, only a few hours after a M5.5 tremor was registered. According to EMSC, the event was largely felt at distances up to 400 km (248.5 miles) while major damage was localized in the Ussita and Visso cities where numerous homes collapsed.

Media reported the earthquakes have caused widespread damage. Four people were injured and more than 5 000 were affected in Marche region. The quakes were followed by landslides which prompted several road closures. 25 municipalities reported severe damage. According to the Italian Civil Protection, 1 000 rescuers from the national Fire Service were deployed in the region. 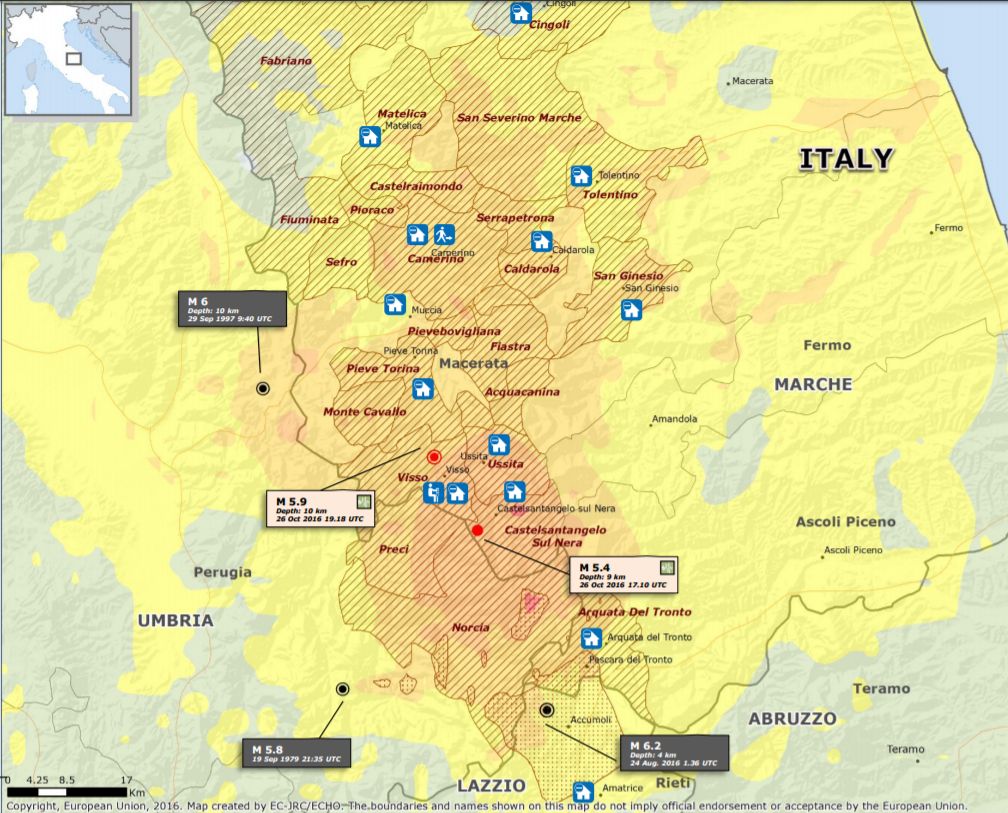 The two earthquakes were located between the epicenter of the 1997 Umbria earthquake, reported on September 26 of the year, and the latest 2016 Amatrice earthquake.

According to Mario Tozzi of the National Institute for Environmental Geology and Geo-Engineering (IGAG), the "double-hit" quake is a typical occurrence for the region of the central Appenini mountains.

"It wasn't an aftershock, it was a new earthquake. What we do not know is whether it was a dormant section of the Amatrice fault or a parallel structure, a close cousin of this fault," explained Tozzi. 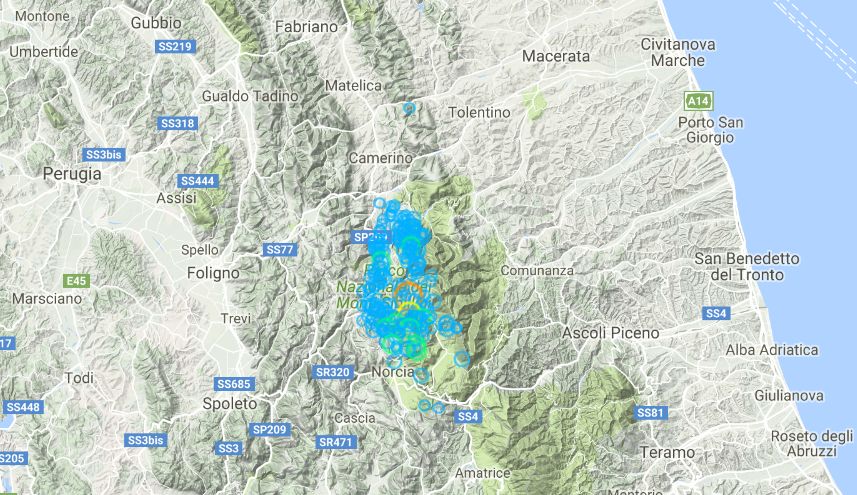 "In the coming months we can expect a series of after shocks but they should get progressively weaker," said Tozzi.

The OECD reports on average up to 0.2% of GDP per annum over the last couple of years, related to natural disasters in general, and preparedness and mitigation plans to increase resilience and reduce economic impact will be crucial over the coming years. 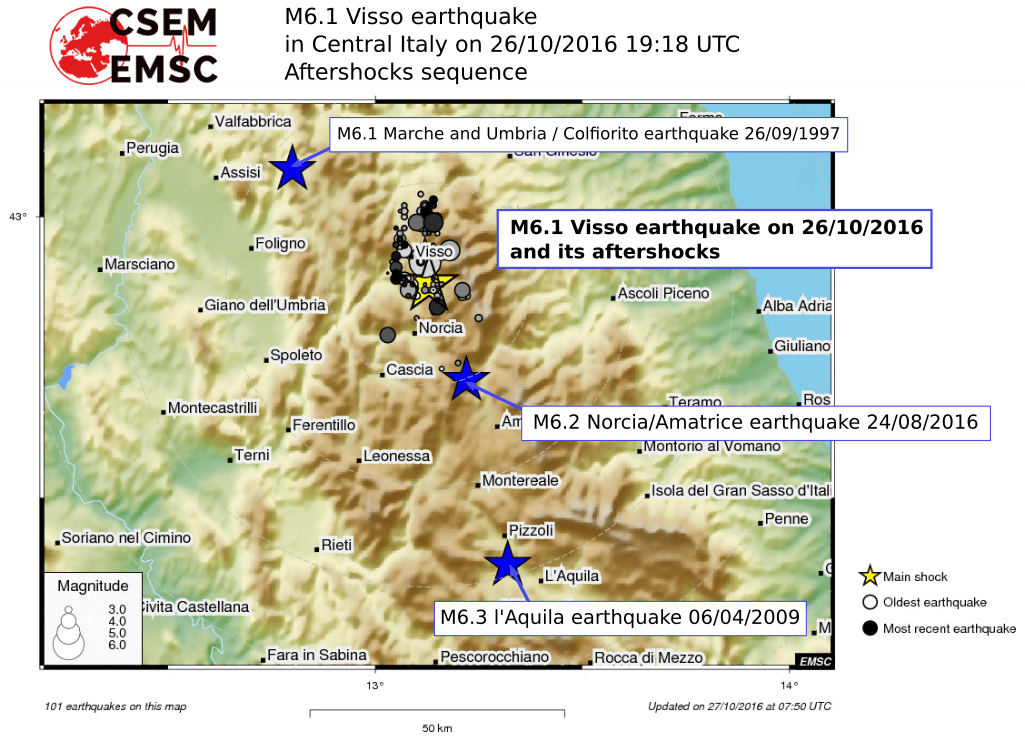 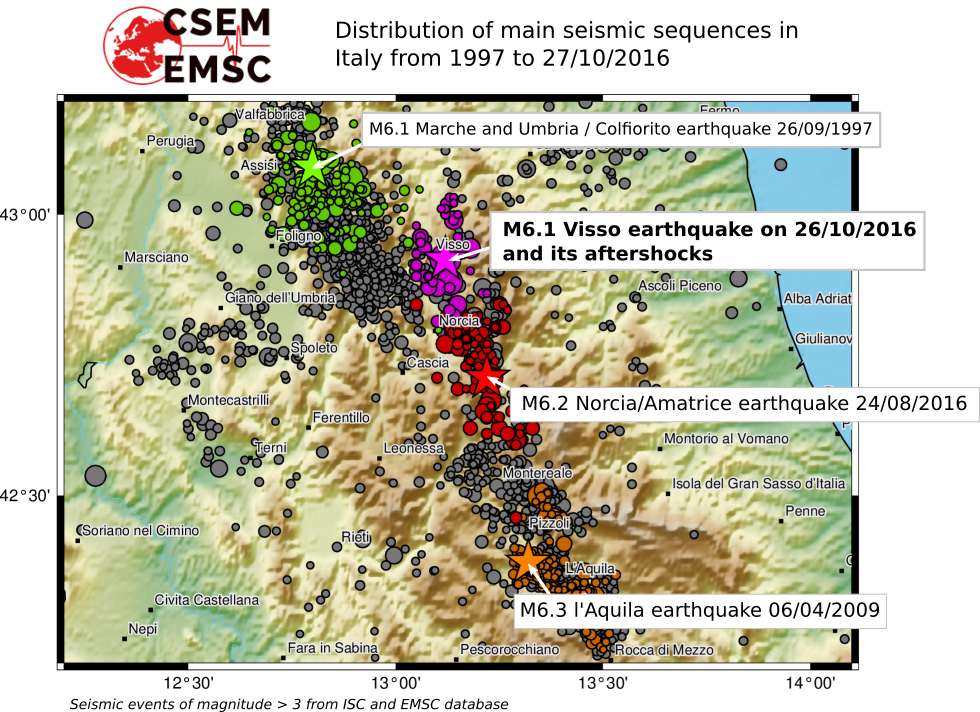 Distribution of main seismic sequences in Italy from 1997 and the October 27, 2016. Image credit: CSEM/EMSC

A severe M6.2 earthquake that hit central Italy on August 24, caused massive damage and killed more than 300 people. The worst affected areas were Accumoli, Amatrice, Posta, and Arquata del Tronto. In a quake near the L'Aquila city in 2009, more than 300 people died, as well.

The devastating August earthquake has caused about €4 billion ($4.5 billion) of damage. 1 400 people who lost their homes are still residing in temporary accommodation.

Italy is situated between the Eurasian and African tectonic plates, a position which makes it prone to seismic and volcanic hazard. According to experts, the highest seismic risk is concentrated along the central mountainous region. As the plates move, Italy is slowly being pushed northwards, and will likely become attached to present-day Croatia in about 20 million years.

Some of the most historically significant earthquakes in the region include the 1980 tremor near Naples, which caused 3 000 deaths, and the 1908 Messina disaster, where 95 000 people were killed, after the earthquake in the waters between Italy and Sicily caused large waves crashing into both coasts.