An overflight over the Kilauea volcano, Hawai'i, conducted this week, revealed new black sand beaches and cloud formations. Despite the fact the newly formed features provide a spectacular sight for visitors, the USGS HVO has issued a volcano observatory warning, prompting the visitors to employ safety measures while on the site.

A volcano flyover with the Paradise Helicopters crew was conducted in the early morning hours of October 13 (local time). The Tropical Visions Video's photographer and videographer Mick Kalber took numerous impressive shots during the overflight.

The crew reported Pele's plume from the Pu'u 'O'o vent and the ocean entry floated southeast, as the 61g lava flow continued. The vent was completely socked in the lava lake, which was almost invisible. At the time, the eastern ocean entry was extremely robust while the western entry stalled out during last week.

“Almost at the top of the Pali, we discovered a large gaping skylight. The break in the tube allowed us to see lava coursing by, feeding the ocean entry some six miles from the vent,” said Kalber.

“Pele continues to form new black sand beaches along the coast near her ocean entries. The hot lava’s interaction with the cold seawater are shattering the flow into bits that are then tumbled into submission. On the eastern side of the plume, many drips fell from the bench, 8 to 10 feet below onto the newly formed beach. What a magnificent sight for visitors both from the tour boats and cliffs nearby!” added Kalber.

According to the HVO, Kilauea volcano continues to erupt at the summit and the Pu'u 'O'o vent on the East Rift Zone. The inflationary tilt was recorded by the tiltmeters at the Kilauea's summit while the lava lake surface was measured at 10.5 m (34 feet) below the floor of Halema'uma'u Crater on the morning of October 18 (local time). The 61g lava flow has continued to enter the sea at Kamokuna without threatening the nearby communities. 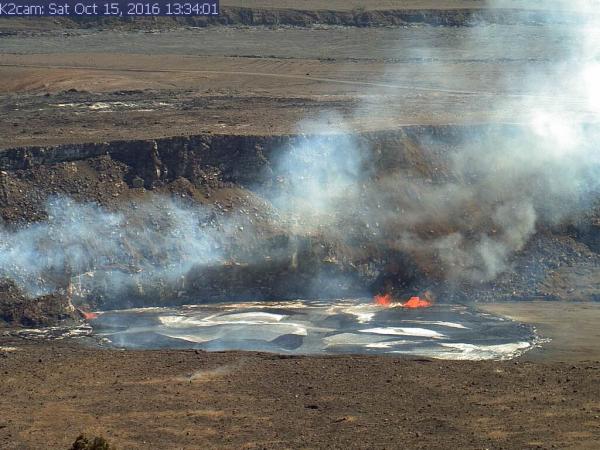 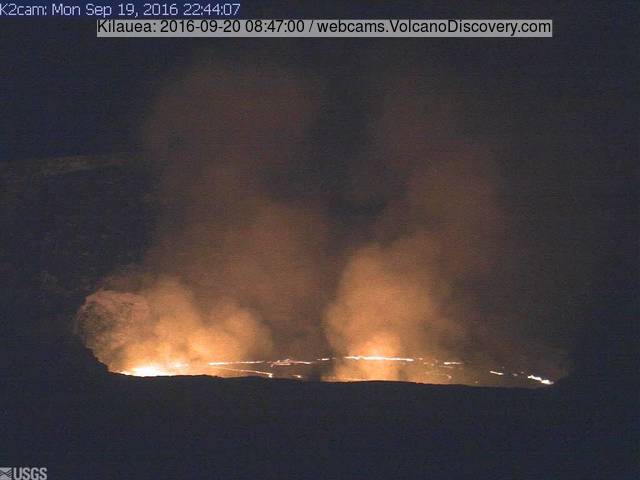 Seismicity was reported within normal with the background rates associated with lava lake spattering. Average daily summit sulfur dioxide emission rates between 5 000 and 7 700 metric tons per day were reported over the last week.

A persistent glow was observed at the long-term sources within the Pu'u 'O'o crater with no significant changes in seismicity in the period between October 17 and 18. The sulfur dioxide emission rate from all East Rift Zone vents was about 358 metric tons per day on October 14.

HVO reported the lava lake continued to rise and fall, circulate, and spatter in Kilauea's Overlook vent in the period between October 5 and 11. Incandescence from long-active sources within the Pu'u 'O'o Crater was observed. The 61g lava flow continued to enter the ocean near Kamokuna while only the east side of the entry was active. Scattered breakouts were active 2 km (1.2 miles) inland from the coast. National Park Service staff reported that a collapse of the eastern part of the lava delta occurred sometime between October 2 and 6.

The USGS HVO has issued a warning for the visitors to the 61g, urging them to stay at the safe distance from an ocean entry and beware of the flying debris created by the explosive interaction between lava and seawater, and of the instability related to the formation of new land. Also, as the interaction of lava with the ocean creates a corrosive seawater plume laden with hydrochloric acid, this, in combination with fine volcanic particles, can irritate the skin, eyes, and lungs.

Kilauea volcano, which overlaps the east flank of the massive Mauna Loa shield volcano, has been Hawaii's most active volcano during historical time. Eruptions are prominent in Polynesian legends; written documentation extending back to only 1820 records frequent summit and flank lava flow eruptions that were interspersed with periods of long-term lava lake activity that lasted until 1924 at Halemaumau crater, within the summit caldera.

The 3 x 5 km caldera was formed in several stages about 1500 years ago and during the 18th century; eruptions have also originated from the lengthy East and SW rift zones, which extend to the sea on both sides of the volcano. About 90% of the surface of the basaltic shield volcano is formed of lava flows less than about 1 100 years old; 70% of the volcano's surface is younger than 600 years. A long-term eruption from the East rift zone that began in 1983 has produced lava flows covering more than 100 sq km, destroying nearly 200 houses and adding new coastline to the island. (GVP)

Featured image: An image of the lava flow from Kilauea obtained during the volcano flyover on October 13, 2016. Image credit: BIg Island Now