Observations and measurements of the Pu‘u ‘Ō‘ō eruption on Kīlauea Volcano’s East Rift Zone during the past month suggest that the magma system beneath Pu‘u ‘Ō‘ō has become increasingly pressurized, the Hawaiian Volcano Observatory reported April 17. If this activity continues, a new vent could form at any time, either on the Pu‘u ‘Ō‘ō cone or along adjacent areas of the East Rift Zone, it added.

Summit tiltmeters recorded deflationary tilt over the past 24 hours, leveling off earlier this morning, HVO said April 18. The summit lava lake level is about 20 m (66 feet) below the rim of the Overlook crater, a drop of about 7 m (23 feet) since yesterday morning. Lava spattering is barely visible from the Jaggar Museum at this time. Seismicity in the summit area is within normal, background rates, with tremor amplitude fluctuations associated with lava lake spattering. Elevated summit sulfur dioxide emission rates persist. 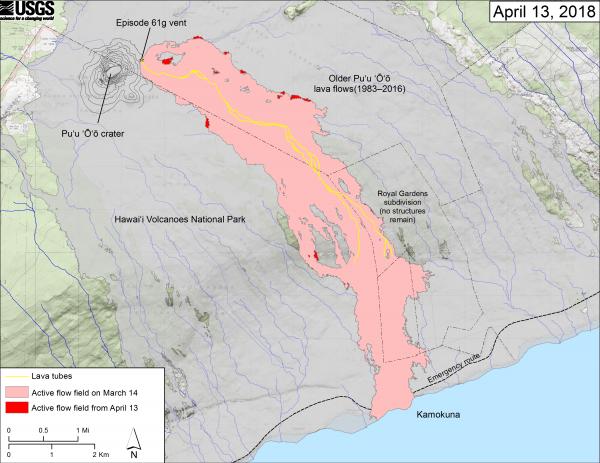 Since mid-March 2018, a tiltmeter and GPS station on Pu‘u ‘Ō‘ō have recorded a pronounced inflationary trend of the cone, and recent webcam images have detected simultaneous uplift of the Pu‘u ‘Ō‘ō crater floor by several meters (yards). These observations provide evidence that magma is accumulating at shallow depths beneath Pu‘u ‘Ō‘ō.

Breakouts from the 61g lava flow are located close to Pu‘u ‘Ō‘ō and above the Pulama pali within the Kahaualeʻa Natural Area Reserve (NAR) and Hawai‘i Volcanoes National Park, respectively.

Because of volcanic hazards, the Hawaii Department of Land and Natural Resources has restricted public access to the Kahauale‘a NAR since 2007 (https://dlnr.hawaii.gov/ecosystems/nars/hawaii-island/kahaualea-2/). Areas within the National Park are also closed (see https://www.nps.gov/havo/closed_areas.htm for more info on these closures).

The current location of active surface lava is not accessible to hikers and is predominantly in a closed area. Hikers and visitors to the lower Puʻu ʻŌʻō lava flow field should be prepared for a variety of hazards, including, but not limited to: hard, rough, uneven and sharp terrain, which can lead to falls, abrasions, lacerations, and other injuries, as well as heat exhaustion or dehydration.

Heavy rains can occur with little warning, producing a steamy ground-fog on recent flows that severely limits visibility. This steam can be acidic and should be avoided.

No services are available on the lava flow field and cell reception is limited, HVO said.

A new vent located on the cone of Pu‘u ‘Ō‘ō would erupt lava flows onto one or more sides of the cone that would initially advance downslope rapidly within a few kilometers from the vent.

Because of the potential for a sudden breakout anywhere on Pu‘u ‘Ō‘ō, the cone is extremely hazardous. The location of a new vent or potential lava-flow paths cannot be estimated until such time that a new vent forms and stabilizes. 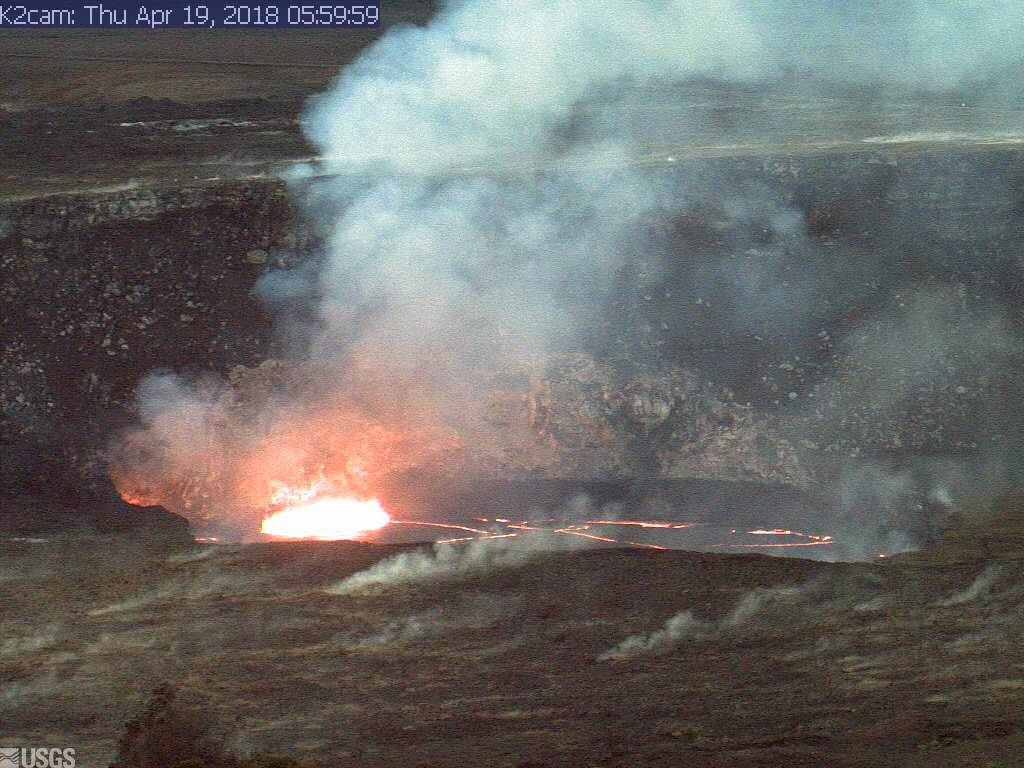 This image is from a research camera mounted in the observation tower at the Hawaiian Volcano Observatory. The camera is looking SSE towards the active vent in Halemaʻumaʻu, 1.9 km (1.2 miles) from the webcam. For scale, the crater wall of Halemaʻumaʻu behind the eruptive vent is about 85 m (~280 feet) high. Image credit: USGS/HVO

Kīlauea Volcano’s East Rift Zone eruption began in January 1983 with high lava fountains that built a cinder-and-spatter cone, later named Pu‘u ‘Ō‘ō. Subsequent activity included continuous lava effusion from vents on Pu‘u ‘Ō‘ō or within a few kilometers (miles) east or west of Pu‘u ‘Ō‘ō. Most of the lava flows erupted from these vents have advanced down the south flank of Kīlauea, often reaching the ocean.

A new vent that opened on the northeast flank of Puʻu ʻŌʻō on June 27, 2014, sent a lava flow (informally called the June 27th flow) 20 km (12.4 miles) to the northeast and into Pāhoa, a town in the Puna District of the Island of Hawai‘i. This lava flow persisted until early March 2015, when all activity near Pāhoa ceased.

On May 24, 2016, the opening of a new vent on the east flank of Puʻu ʻŌʻō led to the demise of the June 27th vent and flow, and sent a new lava flow (61g flow) south-southeast toward the ocean. The flow advanced about 10 km (6.2 miles), reaching the ocean on July 26, 2016. Lava stopped flowing into the ocean in early November 2017, after which surface flows have progressively retreated to near-vent areas above the Pulama pali.