Another spell of severe rainstorms, one of the strongest over the last ten years wrapped China this week. Media reports at least 75 people were killed and over hundred missing.

Total rainfall accumulation over 800 mm (31.5 inches) was reported since the beginning of July in portions of the Hunan province, surpassing the monthly average amount of about 230 mm (9 inches). In only 24 hours, 286 mm (11.3 inches) of precipitation was recorded in Beijing and Hebei, causing the major rivers to overflow their banks. 11 dams and two hydro stations were damaged, as well with numerous flights getting canceled. Half of the subway system was reportedly shut down, as well. 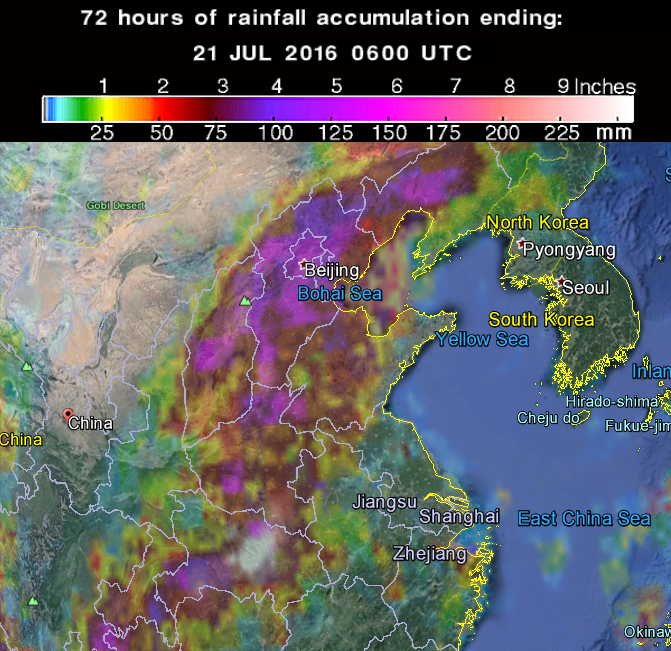 Flooding also caused severe landslides over the last weekend. Numerous houses were devastated, although, luckily, the evacuation was timely, and no one died.

At least 75 people are dead or missing in recent China flooding pic.twitter.com/PbrAe88I7a

More than 150 people have died since July across the entire country, most of which were situated along the Yangzi River.

The rainstorm is still moving northeast and is expected to bring another 100 mm (3.93 inches) to regions around Harbin, according to Westpacwx meteorologists. By July 24, another area of low pressure will likely form along the rainy season front in South West China and continue moving northeast.

In total, tens of thousands of people have been evacuated while economic losses have been estimated at hundreds of millions of dollars. Xi Jinping, the president, has warned residents to be prepared for more difficulties.