Remnants of what was once a Super Typhoon "Nepartak" hit the coast of East China on July 9, 2016, bringing strong winds and very heavy rain to already heavily flooded region.

It was the first typhoon of the year. Before it hit mainland China, Nepartak made landfall over Taiwan's eastern county of Taitung. It hit land about 21:50 UTC on Thursday, July 7 (05:50 local time on Friday, July 8), leaving behind at least three people dead and more than 300 injured.

Nepartak left another trail of destruction early July 9 when it hit China's south-eastern province of Fujian. Raging floodwaters left nine people dead and 18 missing, as of July 11, 2016. As of July 14 (18:00 local time), 69 people have lost their lives and six are still missing as Nepartak's remnants swept over China, Xinhua reported. Minqing County, one of the worst hit regions in the province, has reported 60 deaths. Six cities in the province have been flooded. A total of 506 700 people have been evacuated. 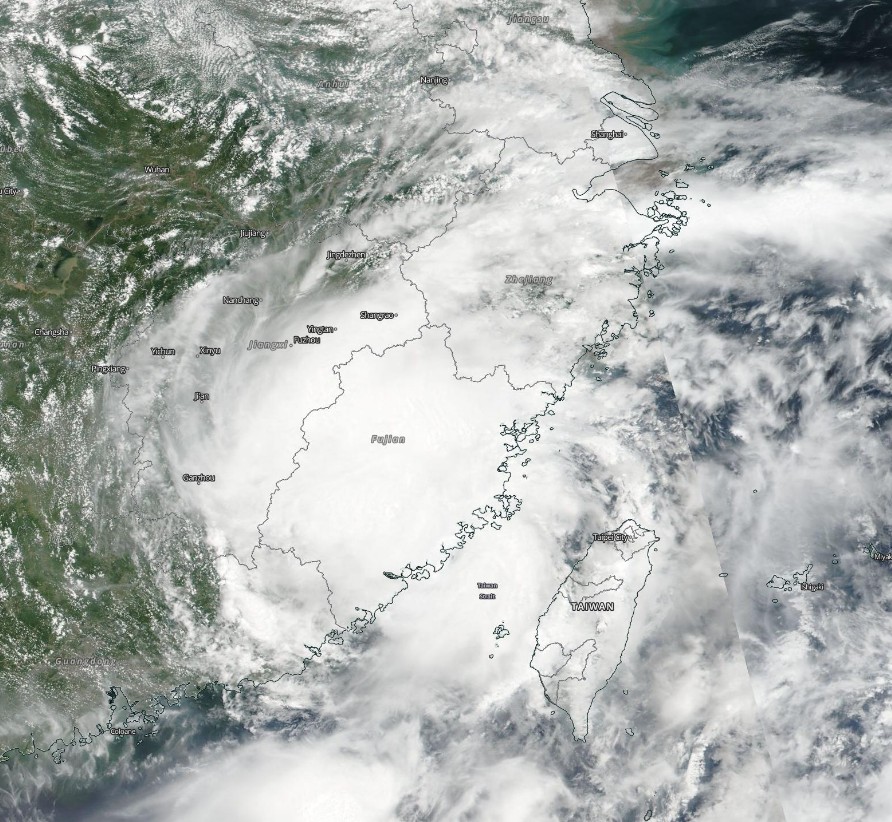 In Fujian's Minqing County, heavy rain lasted from 08:00 to 11:00 local time on Saturday, July 9, with the precipitation in 16 townships of the county exceeding 200 mm (7.9 inches) within three hours. Heavy rains raised the water level of a local river for 7 – 8 meters (23 – 26 feet). The floodwater in the urban area of the county had almost receded by Sunday, but the clean-up work was still heavy as the silt is as deep as 20 to 30 cm (8 – 12 inches) at some locations. The power and water supplies and telecommunication basically resumed on Sunday, July 10, in the county seat except for some worst hit areas like Bandong Township, CCTV reports.

The destructive power of Nepartak was recorded by a surveillance camera at a road junction in Minqing. The video shows that the water level on the street rose by five meters (16 feet) within two hours inundating almost all the streetfront shops:

Over the past couple of weeks, 237 people had been killed by floods with 93 others still missing (as of July 13), state broadcaster China Central Television (CCTV) said on Thursday, July 14, 2016.

It is interesting to notice (animation below) that most of the Nepartak's moisture has been squeezed out in the mountains of Taiwan. "With peaks nearly 3 000 m (1.8 miles), this mountain range stops nearly all the rainfall from crossing the island," meteorologist Robert Speta said.

Further explaining the significance of this typhoon, Speta said: "Despite this storm being so strong we have seen one of the longest streaks with no typhoons in recorded history and also the second latest named storm to ever form in the basin this year. Conditions have just not been favorable for storm development with high shear really tearing apart any storms that even had an idea of forming into a named system. This has a lot to do with the dynamics in the West Pacific and how the atmosphere has been changing from El Nino to La Nina state. Regardless, it sure has made for some unusually calm weather recently. Especially coming off of the record breaking 2015 Typhoon Season."

Heavy rainfall and typhoons are expected in China at this time of year, but the country is now experiencing its worst flooding since at least 1998. According to China's Meteorological Agency, 2016 has already seen a 21% higher rainfall than average.