Large wildfires are raging in Russia's Krasnoyarsk province since June 28, 2016. Most of them were sparked by recent thunderstorms, the initial investigation revealed. Satellite observations also confirm new wildfires near Lake Baikal, Irkutsk province.

As of 10:00 local on June 29, 2016, Krasnoyarsk province reported 27 forest fires, located in the districts of Yenisei, the North-Yenisei, Kezhemsk, Boguchany, Evenki, Motyginskiy, Nizhneingashsky, and Yemelyanovsky. 3 000 hectares of forests were scorched at the time, Komsomlskaya Pravda reports. 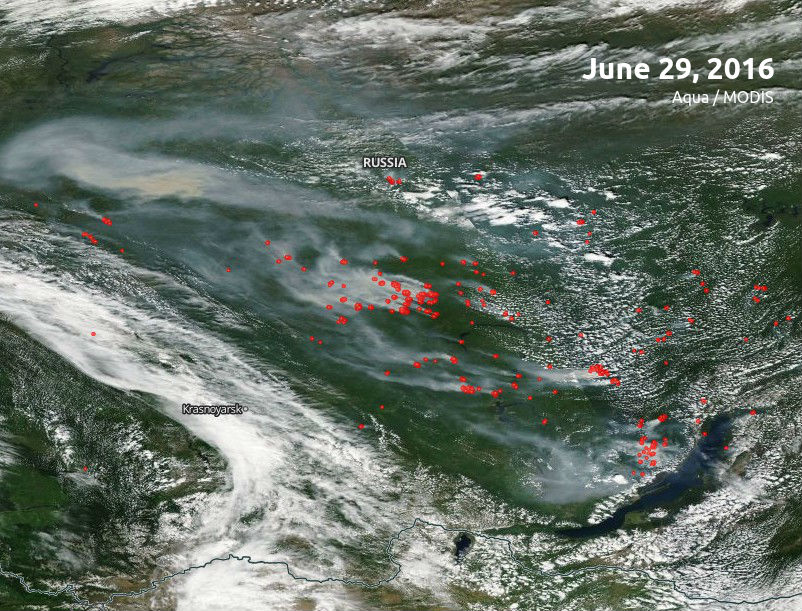 Over 600 people are already involved in firefighting efforts. In addition, firefighters in the province eliminated 21 wildfires on an area od 2 292 hectares on June 28.

The animation below shows daily wildfire locations between June 26 and 30, 2016.

The following imagery was recorded by Japanese Himawari-8 satellite between 04:40 and 11:40 UTC:

The image below shows all thermal anomalies registered by Aqua satellite on June 29.

Notice how central Africa is teeming with red dots. This usually indicates agricultural season is in full swing. The location, widespread nature, and the number of fires suggest that these were deliberately set to manage land.