The Popocatépetl volcano, Mexico, erupted in a series of explosions on January 25, 2016, following a couple of days of heightened activity, Mexico's Center for Natural Disaster Prevention (CENAPRED) reported. Ashfall has been reported in Puebla city, where air traffic was temporarily shut down. The alert level of the volcano is still at Yellow, Phase 2, meaning further eruptions, pyroclastic flows and ash emissions are expected.

In a 24 hour period before January 25, 16 exhalations of low intensity with slight amounts of ash and 4 explosions were registered. Explosions from the volcano were reported at 03:16, 03:25, 06:31 and 09:20 (local time). The monitoring system recorded harmonic tremor lasting 381 minutes. A train explosion started on January 24 at 08:42 and has continued throughout the next day.

Emission of incandesce material was observed during the main exhalation while slight incandescence occurred during some lapses in the night. A faint but continuous emission of steam and gas spreading eastward has been reported. The local webcams are currently following the development and streaming the volcano emissions live.

According to Washington VAAC's advisory issued 04:19 UTC today, continuous ash emission from the volcano was observed on January 26. Volcanic ash is reaching an altitude of 6 km (20 000 feet) and is moving northeast from the summit at 27.8 km/h (17.3 mph). According to the forecast, the ash emissions will continue. 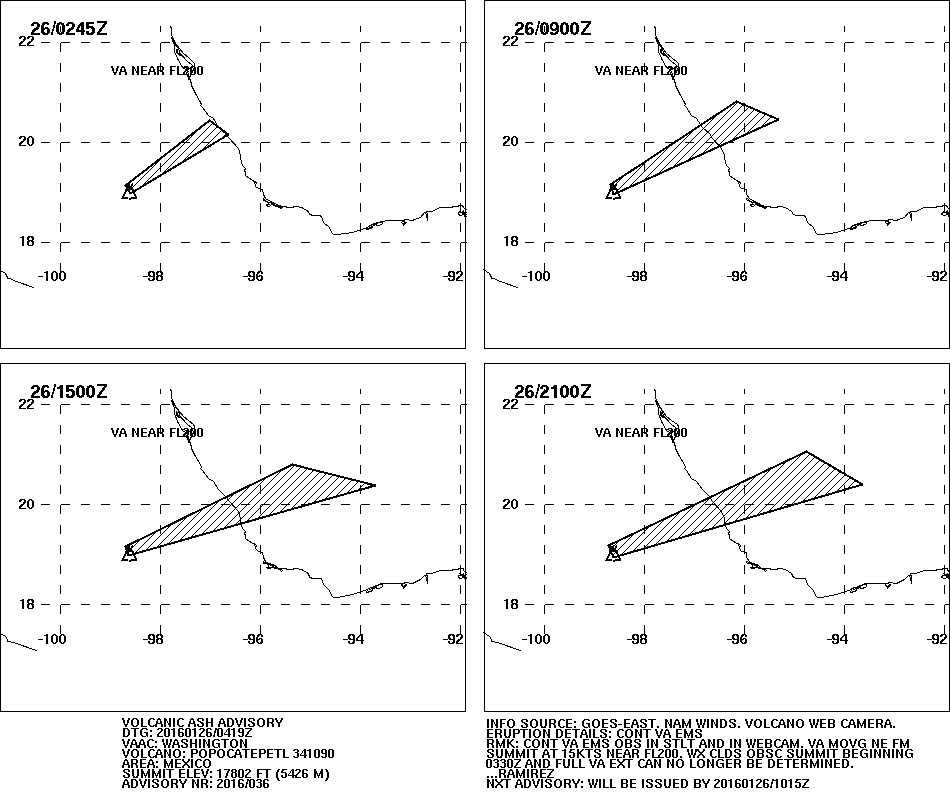 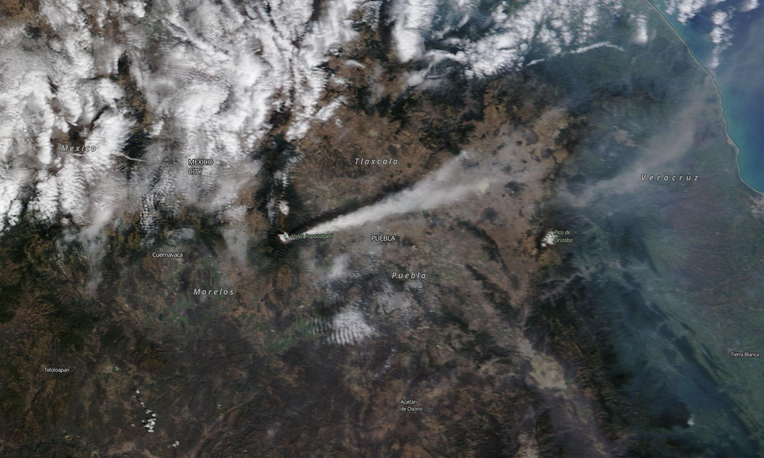 In the period between December 29, 2015, and January 5, 2016, the seismic network at Popocatépetl volcano recorded 4-92 daily emissions, and 191 were detected on January 3. 11 explosions were observed daily, and variable nighttime crater incandescence was reported, according to GVP.

An explosion on January 2 ejected tephra onto the N flank, and a small steam, gas and ash plume drifted E on January 4. On the same day, at 22:46 (local time) a seven-hour period of explosions started, which ended on the next day at 05:45. Six other explosions were reported in the evening. The alert level remained at Yellow, Phase Two throughout this period.

Between November 11 and 17, 2015, 30-63 daily emissions were recorded at Popocatépetl. 102 and 88 were observed on November 14 and 16. Variable nighttime incandescence was reported on some days. Explosions were registered almost daily on the seismic and acoustic networks.

Ash plume rose from the crater on November 12. On November 17, the ash plume rose 2 km (6 561.7 feet), and incandescent material was deposited on the flanks within 1 km (3 280.8 feet) of the crater. Daily gas plumes drifted SW and NW, and the alert level remained at Yellow, Phase Two.

The ashes from the Popocatépetl eruption have dusted the airport in Puebla city in central Mexico on January 25, urging the authorities to bring the operations to a halt temporarily.

According to Jesus Morales, the Puebla state civil protection department director, the airport operations were closed for a few hours to enable the workers to remove the volcano ashes from the runway. 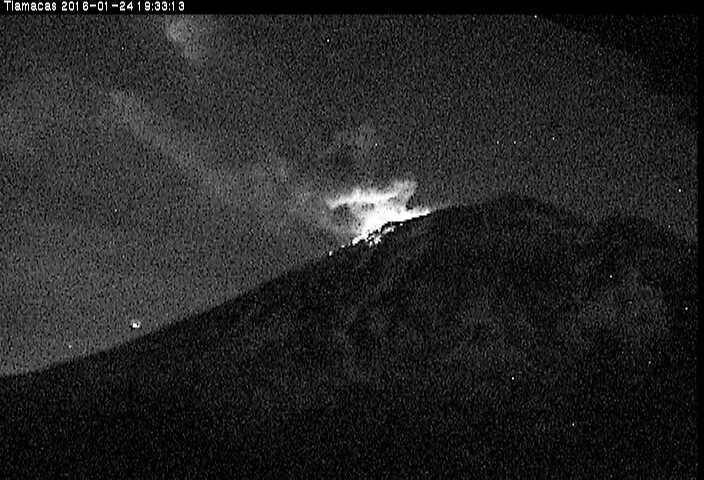 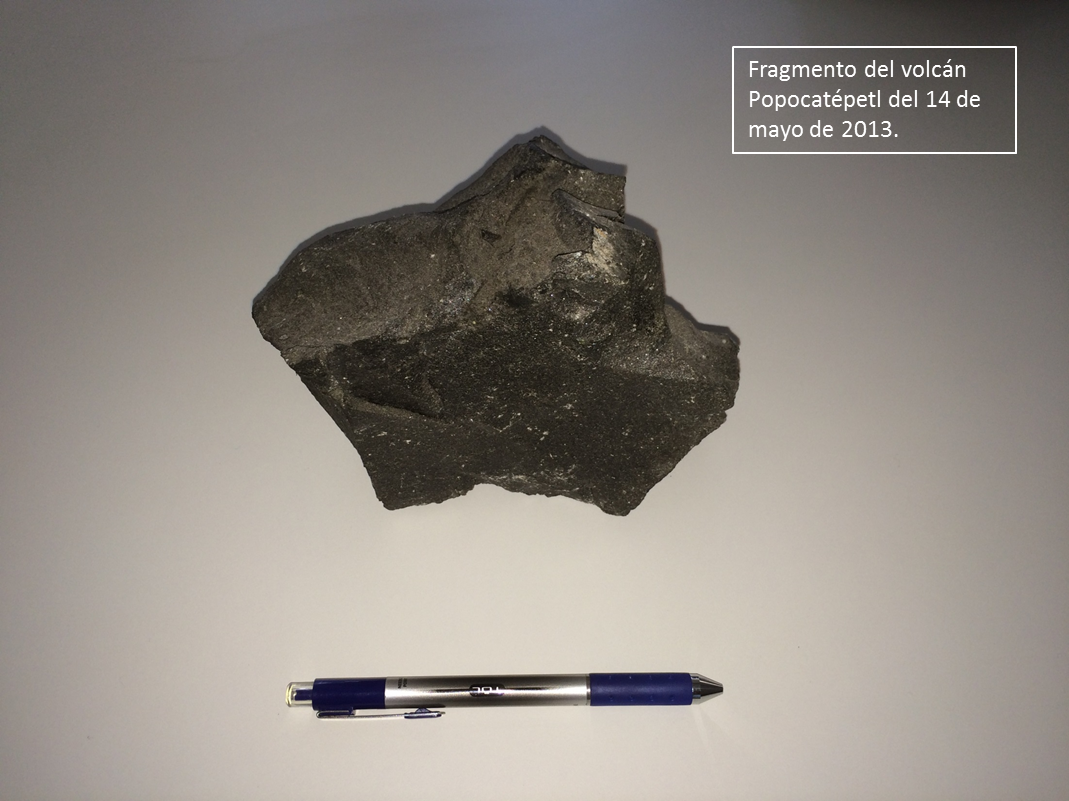 A ballistic fragment from the Popocatepetl volcano, May 14, 2013. Image credit: CENAPRED

CENAPRED warned the people not to go near the volcano, especially near the crater, due to the hazard caused by ballistic fragments. The Yellow Phase Two level alert has been issued, meaning low to moderate explosive activity, ashfall in nearby areas, and possible short range pyroclastic flows and mudflows are expected.

The safety radius of 12 km (39 370 feet) has been established, and staying within that area is prohibited. People have been urged to remain alert and follow further development, as evacuations might be necessary.

In the case of ashfall, CENAPRED recommends people should cover nose and mouth with a wet handkerchief or a mask, clean their eyes and throat with pure water, avoid contact lenses, close or cover up the windows and remain indoors as much as possible.

Volcán Popocatépetl, whose name is the Aztec word for smoking mountain, towers to 5 426 m (17 801.8 feet), 70 km (43.5 miles) SE of Mexico City to form North America's 2nd-highest volcano. The glacier-clad stratovolcano contains a steep-walled, 400 x 600 m (1 312.3 x 1 968.5 feet) wide crater. The generally symmetrical volcano is modified by the sharp-peaked Ventorrillo on the NW, a remnant of an earlier volcano. At least three previous major cones were destroyed by gravitational failure during the Pleistocene, producing massive debris-avalanche deposits covering broad areas to the south.

The modern volcano was constructed south of the late-Pleistocene to Holocene El Fraile cone. Three major plinian eruptions, the most recent of which took place about 800 CE, have occurred from Popocatépetl since the mid Holocene, accompanied by pyroclastic flows and voluminous lahars that swept basins below the volcano. Frequent historical eruptions, first recorded in Aztec codices, have occurred since pre-Columbian time.