A team of experts from the University of Southampton have pioneered using daily monitoring of mobile phone data to track the movement of displaced population across the areas of Nepal affected by the major April 2015 earthquake. The tracking is designed to help with the relief efforts in the country and supply timely and accurate reports to the United Nations, University of Southampton announced on November 9, 2015.

The massive 8.1M earthquake, followed by over 300 aftershocks, hit Nepal on April 25, 2015. More than 9 000 people died and over 23 000 were reported injured. Infrastructural damage was extremely large, as about 500 000 buildings were devastated and economic loss was estimated at $7 065 million.

The research team started the mobile phone tracking in April 2015, only one week after the major disaster shook Nepal, working as a part of the WorldPop project and Flowminder Foundation.

"We had been planning to conduct a project of this kind in Nepal since 2014 and the Flowminder team was already in Kathmandu setting this up. As a result, when the quake struck, we were able to respond rapidly and were well-placed to help," Flowminder Director and Professor of Geography at Southampton Andy Tatem says.

"Although we have used mobile phone data before to measure population movements, this is the first time we have used the method in an ongoing ‘live’ situation. By watching how the population moves on a daily basis, we have been able to help directly with aid efforts and the rebuilding of infrastructures."

The tracking works in synchronization with Ncell mobile phone operator in Nepal to analyse data from 12 million mobile devices across the country. Each time a person uses their phone it sends a location to a receiving tower. This information can then be utilized to estimate the population density, movement and its change over time. The data gathered on the population movement is then compared to the movement data gathered freshly after the quake, enabling the experts to find trends of locations where from and to people move. 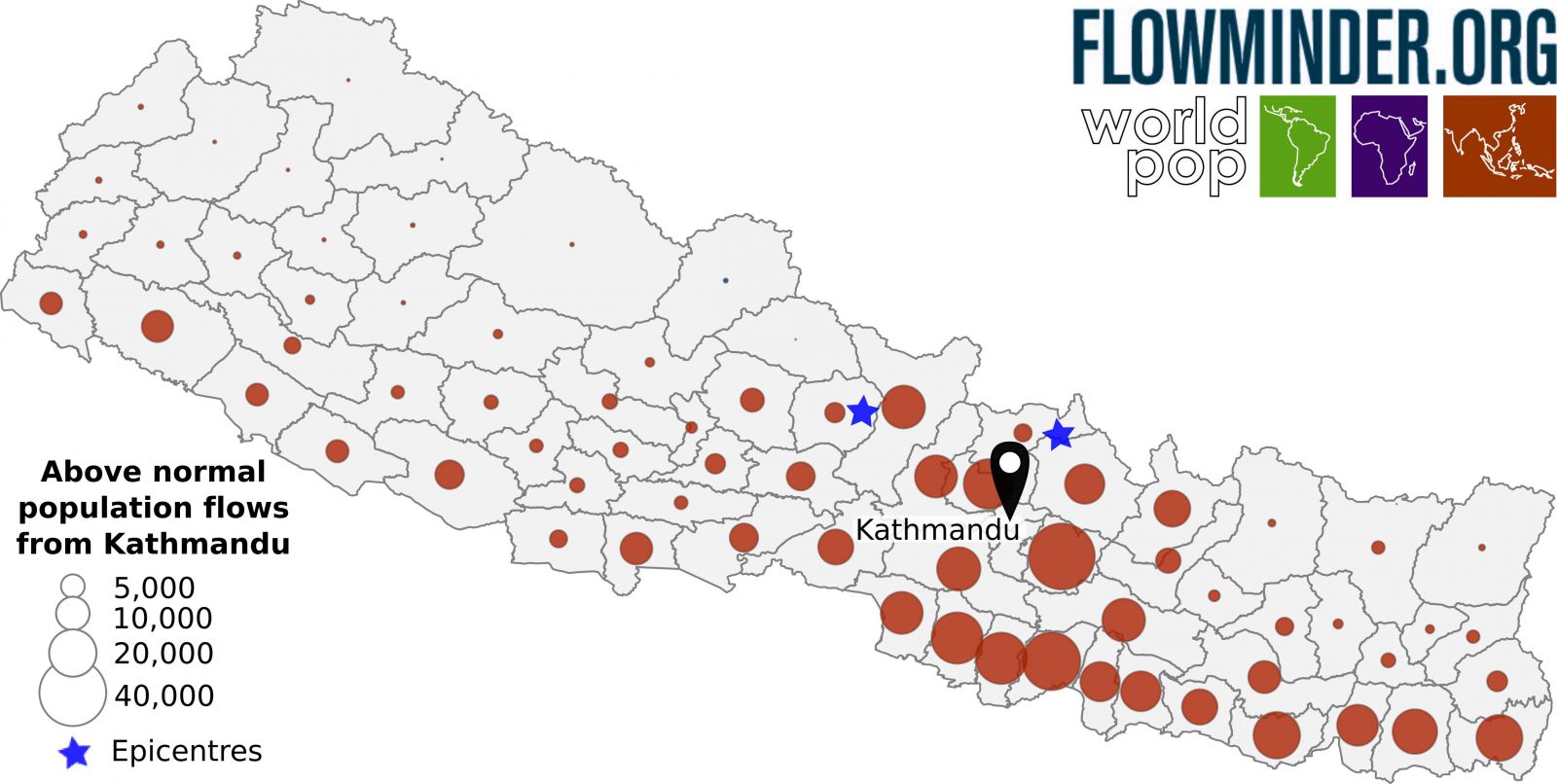 Number of people displaced from Kathmandu to other districts as of May 14, 2015 compared to pre-earthquake data prior to April 7. Image credit: University of Southampton

According to the analysis, 500 000 people left Kathmandu Valley two weeks after the quake. Majority of the population moved to the surrounding districts and the south and southeast parts of Nepal, a previously unobserved pattern. In total, about 1.8 million people left their home place across the country.

Good news for the affected population is that majority of these people have now returned. The slowest return rate was observed for Kathmandu Valley, and the largest population inflow was estimated for the location of Kathmandu center.

"Large population movements occur each time there is a natural disaster and there is often limited information to help understand where affected people move to making it difficult to plan a response. The use of mobile phone data that we have pioneered has now proved to be invaluable in a real scenario helping to get support to where it is needed in an effective way," Dr Robin Wilson of Geography and Environment at Southampton, leader of the analyses of mobile phone data said.

Featured image: Number of people displaced from Kathmandu to other districts as of May 14, 2015 compared to pre-earthquake data prior to April 7. Image credit: University of Southampton