NASA's scientists have produced new maps of Jupiter from images collected by the Hubble Space Telescope. Newly composed maps are the first in a series of yearly images of the Solar System's outer planets, designed to keep track of how these giant worlds change over time.

Yearly observations of the giant outer planets of the Solar System are designed to capture a broad range of changing features, such as winds, clouds, storms and atmospheric chemistry. The collections will hopefully help current and future scientists to see how the planet's broad range of features evolve with time.

So far, the images of Jupiter collected by the Hubble Space Telescope have uncovered a rare wave located north of the planet's equator and a unique filamentary feature in the core of the Great Red Spot.

“Every time we look at Jupiter, we get tantalizing hints that something really exciting is going on,” said Amy Simon, a planetary scientist at NASA’s Goddard Space Flight Center in Greenbelt, Maryland. “This time is no exception.”

The scientists have produced two global maps of Jupiter representing nearly back-to-back rotations of the planet. These observations have enabled the researchers to determine the speed of Jupiter's winds.

​In Jupiter’s North Equatorial Belt, scientists spotted a rare wave that had been seen there only once before. It is similar to a wave that sometimes occurs in Earth’s atmosphere when cyclones are forming. This false-color close-up of Jupiter shows cyclones (arrows) and the wave (vertical lines). Image credit: NASA/ESA/Goddard/UCBerkeley/JPL-Caltech/STScI

According to the newly acquired images, the Great Red Spot indeed continues to shrink, its appearance becoming more circular, as its long axis is now about 240 km (150 miles) shorter than in 2014. The storm had been shrinking at a faster than average rate, recently, although its latest change is still consistent with the estimated long-term trends.

The Great Red Spot has slightly changed its coloring to a more pronounced orange, and its core is now less distinct and intense than previously observed. An unusual wispy filament spreading across the entire vortex width can be spotted. This filamentary streamer rotates and twists throughout the 10-hour span of the Great Red Spot image sequence, getting distorted by winds blowing at 531 km/h (330 mph) or even greater speeds.

A wave that had previously been observed over ten years ago by Voyager 2, on only one occasion, has been spotted again in Jupiter's North Equatorial Belt region dotted with cyclones and anticyclones. 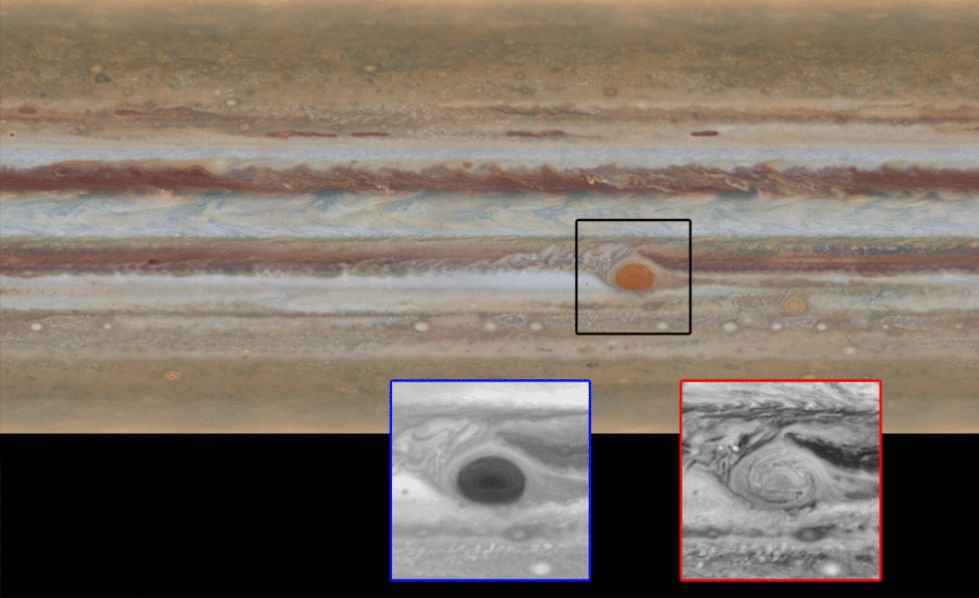 ​The movement of Jupiter’s clouds can be seen by comparing the first map to the second one (See animation). Zooming in on the Great Red Spot at blue (left) and red (right) wavelengths reveals a unique filamentary feature not previously seen. Image credit: NASA/ESA/Goddard/UC Berkeley/JPL-Caltech/STScI

The wave is similar in appearance to baroclinic waves that sometimes appear in Earth's atmosphere where cyclones are forming, and it could originate from a clear layer beneath the clouds, only becoming visible as it propagates up into the cloud deck. “Until now, we thought the wave seen by Voyager 2 might have been a fluke. As it turns out, it’s just rare!,” said Glenn Orton of NASA’s Jet Propulsion Laboratory in Pasadena, California.

Researchers have also observed Neptune and Uranus, and maps will be placed in the public archive, while Saturn maps will be added to the series later.

The special series of observations made by Hubble is called the Outer Planet Atmospheres Legacy program.

“The long-term value of the Outer Planet Atmospheres Legacy program is really exciting. The collection of maps that we will build up over time will not only help scientists understand the atmospheres of our giant planets, but also the atmospheres of planets being discovered around other stars, and Earth’s atmosphere and oceans, too,” explained Michael H. Wong of the University of California, Berkeley.