The Japan Meteorological Agency (JMA) has raised the Volcanic Alert Level of Meakandake volcano to 2 of 5 (do not approach the volcano) on July 28, 2015. The last eruption of this volcano took place on November 28, 2008.

The decision to raise the alert level was made after a swarm of shallow volcanic earthquakes started under the Ponmachineshiri crater on July 27. 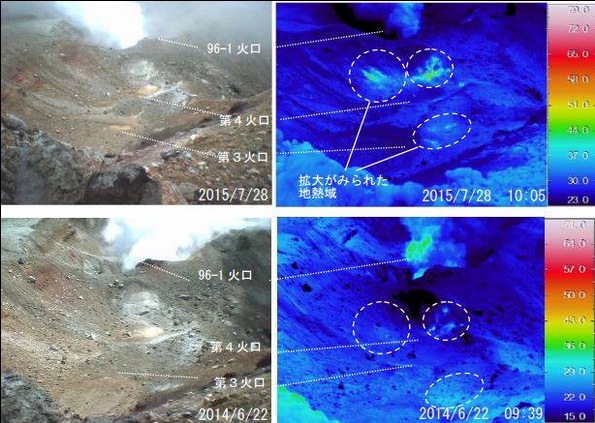 Both temperatures and fumarolic activity inside the crater have increased, Volcano Discovery reports.

The earthquake swarm follows a gradual increase in seismicity under the volcano noted since April this year.

JMA thinks the most likely outcome is a very small (phreatic) eruption in the near future and recommends not to approach the crater within 500 m. 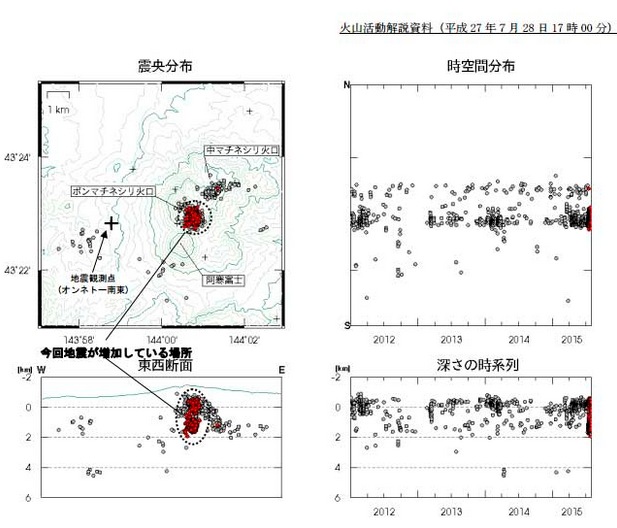 The first seismic tremors under the Meakandake volcano (Akan volcanic complex), before the eruption of November 28, 2008, were reported on September 29, 2008 and prompted JMA to raise the alert level to 2.

JMA then lowered it back to 1 (normal) on October 17 and increased again to 2 on November 18.

Meakandake is an andecitic composite volcano group formed at the SW crater wall of the Akan caldera, located at the eastern part of Hokkaido. Nakamachineshiri crater, located at the center of the group, and Ponmachineshiri crater, located at the summit, have vigorous sulfuric activities and there are many sulfuric fumaroles and hot springs at the flank and the foot of the volcano. Phreatic explosions have occurred in historical times, and no less than 10 small phreatic explosions occurred at above craters from 1856 to 1955. (JMA)

Akan is a 13 x 24 km caldera located immediately SW of Kussharo caldera. The elongated, irregular outline of the caldera rim reflects its incremental formation during major explosive eruptions from the early to mid-Pleistocene. Growth of four post-caldera stratovolcanoes, three at the SW end of the caldera and the other at the NE side, has restricted the size of the caldera lake. Conical Oakandake volcano was frequently active during the Holocene. The 1-km-wide Nakamachineshiri crater of Meakandake volcano was formed during a major pumice-and-scoria eruption about 13,500 years ago.

Of the Holocene volcanoes of the Akan volcanic complex, only the Meakandake group, east of Lake Akan, has been historically active, producing mild phreatic eruptions since the beginning of the 19th century. Meakandake is composed of nine overlapping cones. The main cone of Meakandake proper has a triple crater at its summit. Historical eruptions at Meakandake have consisted of minor phreatic explosions, but four major magmatic eruptions including pyroclastic flows have occurred during the Holocene. (GVP)