In two new studies led by the University of California, Irvine (UCI), scientists mapped 37 of the world's largest underground basins using NASA's Gravity Recovery and Climate Experiment (GRACE) satellites and concludes that humanity is rapidly depleting one third of these underground sources of water.

Around the world, there are underground basins that are vital sources of fresh water. Around 2 billion people rely directly on underground aquifers as their primary source of water. Ground water is continuously being used for cultivation which is our source of food. Thus, underground water is being finished quickly.

However, so that we can be well prepared before a worldwide crisis rises and be cautious, we need to determine how much water is left in the underground reservoirs.

"Given how quickly we are consuming the world's groundwater reserves, we need a coordinated global effort to determine how much is left," said UCI professor and principal investigator Jay Famiglietti, who is also the senior water scientist at NASA's Jet Propulsion Laboratory in Pasadena, California.

In the new studies, published in Water Resources Research, the scientists used data from the GRACE satellite mission to assess trends in the aquifers. This mission, which began in 2002, is a joint effort between the U.S. National Aeronautics and Space Administration (NASA) and Germany’s Deutsche Forschungsanstalt für Luft und Raumfahrt (DLR). Two GRACE satellites are currently in orbit around the Earth.

In the first paper, researchers found that 13 of the planet's 37 largest aquifers studied between 2003 and 2013 were being depleted while receiving little to no recharge. Eight were classified as "overstressed," with nearly no natural replenishment to offset usage. Another five were found to be "extremely" or "highly" stressed, depending upon the level of replenishment in each. Those aquifers were still being depleted but had some water flowing back into them. 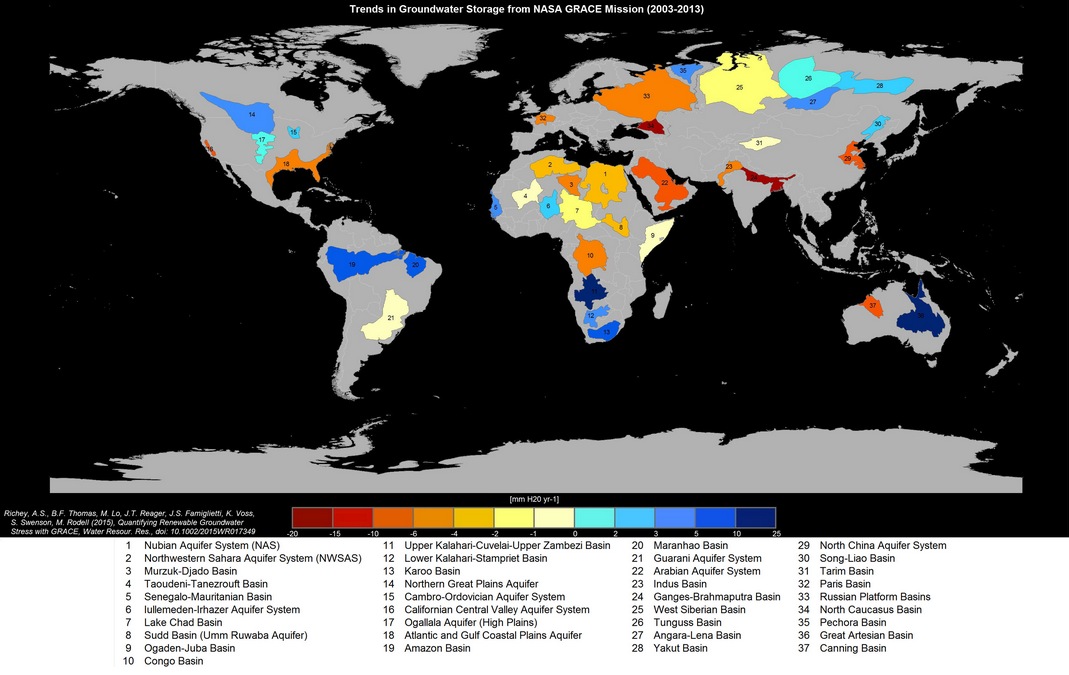 The scientists concluded that total usable groundwater volume of the world is poorly known. The actual volume is far less than estimated decades ago. While people may be optimistic about having tons of water underground, the risk is that there is too little left for use. The depletion time also cannot be accurately projected. In the overstressed Northwest Sahara Aquifer System, for example, time to depletion estimates varied between a decade and several millennia.

According to the research findings, the Arabian Aquifer System, an important water source for more than 60 million people, is the most overstressed in the world. The Indus Basin aquifer of northwestern India and Pakistan is the second-most overstressed, and the Murzuk-Djado Basin in northern Africa is third. Most of the unstressed aquifers were located in remote forests and regions with higher rainfalls.

The most overburdened aquifers are in the world's driest areas. Alexandra Richey, the lead author on both studies, who conducted the research as a UCI doctoral student, warns against what might happen if water crisis rises in a region with socioeconomic or political tensions. She adds, "We're trying to raise red flags now to pinpoint where active management today could protect future lives and livelihoods."

The research notes that the dearth of water has already caused significant ecological damages. The authors call for a well concerted effort to determine how much water is left in the world's underground reservoirs. This may not be an easy job since the depth and thickness of many large aquifers make it tough and costly to drill or otherwise reach bedrock and understand where the moisture bottoms out. Despite that, the authors emphasizes that it has to be done for the greater benefit of the humanity.

To read the papers, visit: