A long duration M9 flare which erupted from Region 2297 on March 7 had a 260 sfu Tenflare associated, as well as a Type II (estimated velocity 704 km/s) and Type IV radio emissions, and a partial-halo Coronal Mass Ejection (CME) with an approximate plane-of-sky speed of 1 225 km/s.

By March 9, this region produced 4 M-class solar flares, but due to its location close to the east limb, no CMEs were expected to be geoeffective. 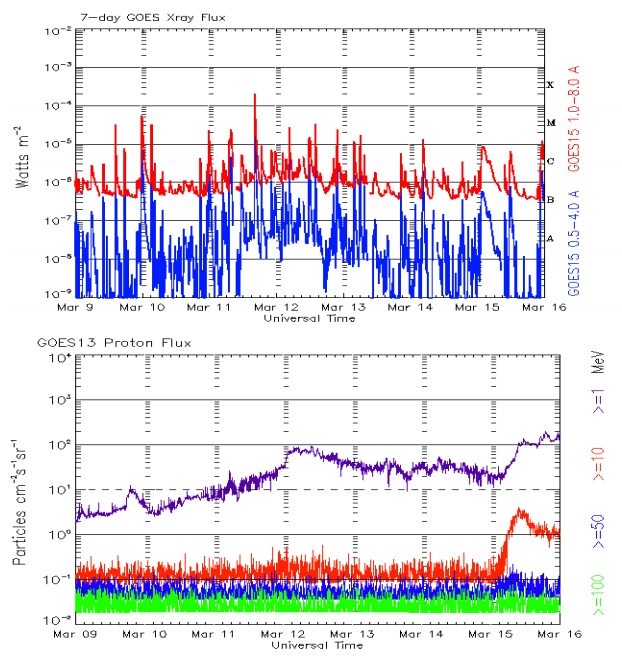 Greater than 10 MeV proton enhancement was observed at geosynchronous orbit on March 15 beginning around 03:00 UTC and reaching a maximum flux level of 4 pfu at 09:40 UTC before slowly receding to the 1 pfu level by the end of the UTC day. The enhancement was the result of the combination of a filament eruption and C9 flare activity from Region 2297 early on March 15.

From March 6 through 8, a slow increase in solar wind speeds occurred to around 600 km/s as a northern positive coronal hole high speed stream became geoeffective. Total field values increased to a modest 10 nT late on March 6 before decreasing to values near 5 nT by March 9. The geomagnetic field responded with quiet to active levels from March 6 to 8.

A solar sector boundary crossing was observed at 21:38 UTC on March 14 switching from a mostly positive into a negative sector. By March 15, a brief enhancement of the total field was observed at 17:27 UTC to 15 nT. This enhancement was possibly a glancing blow that was expected from the March 11th CME. 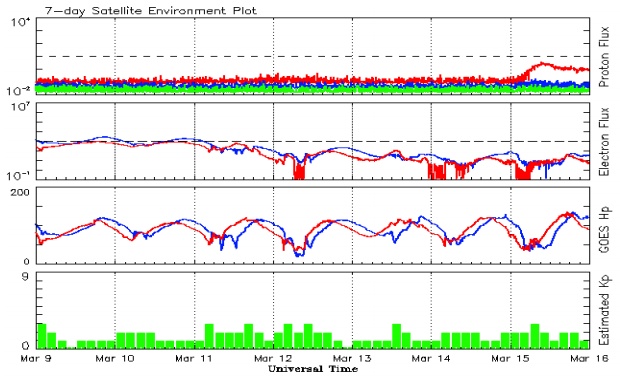 A chance for a greater than 10 MeV proton event exists from March 16 – 21 due to further potential significant flare activity from Region 2297 as well as a possible enhancement of the proton flux levels when the March 15th CME arrives late on March 17.

The greater than 2 MeV electron flux at geosynchronous orbit is expected to be at high levels from March 20 – 25, March 28 – 31, and again from April 3 – 5 due to recurrent coronal hole high speed stream (CH HSS) activity.

Geomagnetic field activity is expected to be at unsettled to active levels with minor storm periods likely on March 18 due to a combination of CH HSS effects as well as the arrival of the March 15th CME by mid to late on March 17. Unsettled to active periods are also
likely from March 22 to 24, March 27 to 31, and April 2 to 4 with minor storming possible on March 28 to 29 due to recurrent CH HSS activity.