According to a new study by Kobe University earth scientists, Japan could be nearly destroyed by a massive volcanic eruption over the next century. The experts said they analyzed the scale and frequency of volcanic eruptions in the archipelago nation over the past 120 000 years and calculated that the odds of a devastating eruption at about one percent over the next 100 years.

Japan is home to about seven percent of the volcanoes that have erupted over the past 10 000 years. 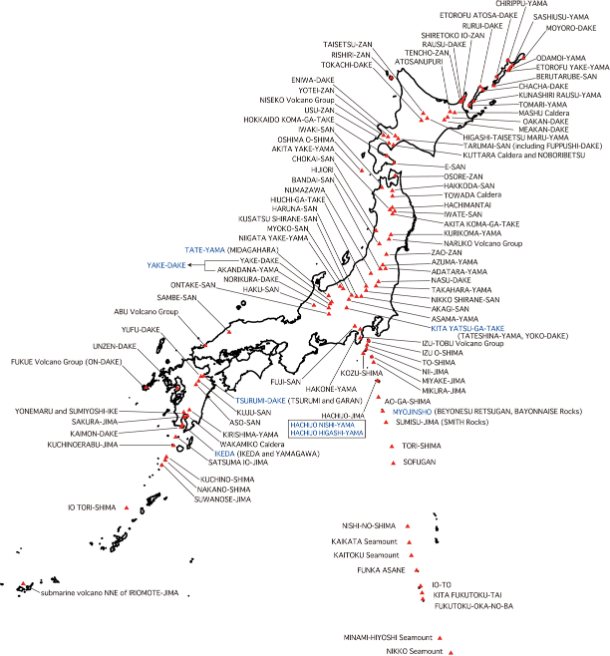 Volcanoes which have erupted within the past 10,000 years or volcanoes with vigorous fumarolic activity. CLICK ON THE IMAGE FOR THE LARGER VIEW. (Credit: Geological Survey of Japan)

The chance of a major earthquake striking the city of Kobe within 30 years was estimated at about one percent just a day before a 7.2-magnitude quake destroyed the Japanese port city in 1995, killing 6 400 people and injuring nearly 4 400 others.

The Kobe University researchers said a disaster on the southernmost main island of Kyushu would see an area with seven million people buried by flows of lava and molten rock in just two hours. This area has been struck by seven massive eruptions of that kind over the past 12 000 years.

Researchers warned that volcanic ash would also be carried by westerly winds toward the main island of Honshu, strangling infrastructure and key transport systems, making almost all of the country "unlivable". The study said that it would be hopeless trying to save about 120 million people living in major cities and towns across Honshu.

"It is not an overstatement to say that a colossal volcanic eruption would leave Japan extinct as a country. It would be no surprise if such a colossal eruption occurs at any moment." Professor Yoshiyuki Tatsumi and associate professor Keiko Suzuki

The new research comes weeks after Japan's Mount Ontake erupted without warning – killing 57 people and leaving at least six others missing in the country's deadliest volcanic eruption in almost 90 years. Pyroclastic flows, one of the deadliest volcanic hazards, have occurred at 28% of Japan's eruptions. More than 127 million people are at risk.

Japan has a long record of documented historic eruptions starting with the eruption of Mt. Aso in 553 AD. Aso has proven to be the country's most active volcano with more than 165 eruptions. Japan's largest historic eruption was at Towada in 915 AD.

Japan is the world's leading volcanic regions with 1 274 dated eruptions and 94 volcanoes with dated eruptions. Japan also leads the world with 41 large (VEI greater than or equal to 4) explosive eruptions in the last 10 000 years. The eruption of Kikai 6 300 years ago was one of the largest (VEI=7) eruptions on Earth in the Holocene.