NOAA and its research partners predict that western Lake Erie will have a significant bloom of cyanobacteria, a toxic blue-green algae, during the 2014 bloom season in late summer. However, the predicted bloom is expected to be smaller than last year’s intense bloom, and considerably less than the record-setting 2011 bloom.

Bloom impacts will vary across the lake’s western basin and are classified by an estimate of both its concentration and how far it spreads. 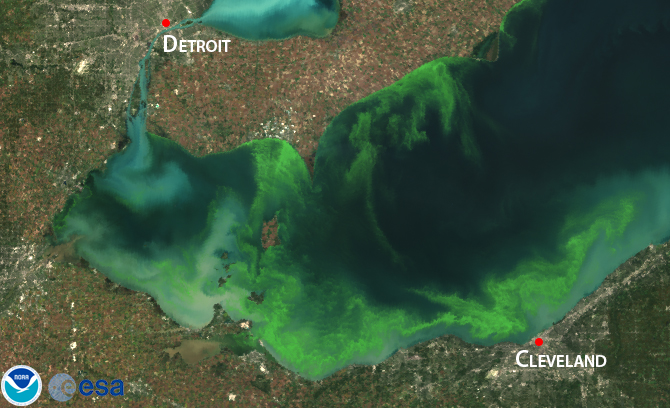 Satellite image of 2011 bloom, the worst bloom in recent years, which impacted over half of the lake shore. Credit: MERIS/ESA, processed by NOAA/NOS/NCCOS

“The reemergence of harmful algal blooms in Lake Erie is an ecological and economic setback for communities along the coast,” U.S. Representative Marcy Kaptur said. “NOAA, Ohio Sea Grant, OSU, Heidelberg University and University of Toledo are developing tools to predict and target phosphorus, which will help in the fight to restore balance to Lake Erie’s ecosystem, Ohio’s greatest natural resource.” 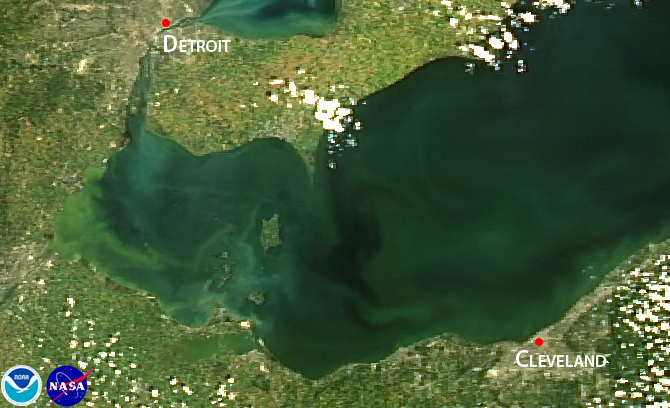 “The Lake Erie harmful algal bloom forecast, combined with NOAA’s weekly HAB Bulletins, underscores the importance of having accessible and reliable environmental intelligence so the public and environmental health specialists can make informed decisions,” said Holly Bamford, assistant NOAA administrator for the National Ocean Service. “With this information, we can work collectively to understand harmful algal blooms and mitigate risk to humans and marine ecosystems.” 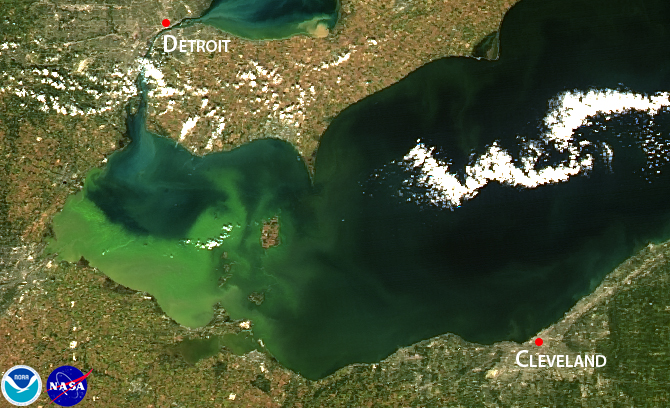 Satellite image of 2013 intense bloom, which was concentrated in the lake's western basin. Credit: MODIS/NASA, processed by NOAA/NOS/NCCOS

“This NOAA model, resulting from a great collaboration, has been incredibly valuable to us as we work to eliminate blooms to protect human health, the Lake Erie ecosystem and its coastal economy,” said Jeff Reutter, Ph.D., director of Ohio State University’s Sea Grant program and Stone Laboratory. “In Ohio, as part of the Ohio Phosphorus Task Force II, we have used information from the NOAA model to help us target reductions in the amount of phosphorus going into the lake that should help us greatly reduce or eliminate the HABs.” 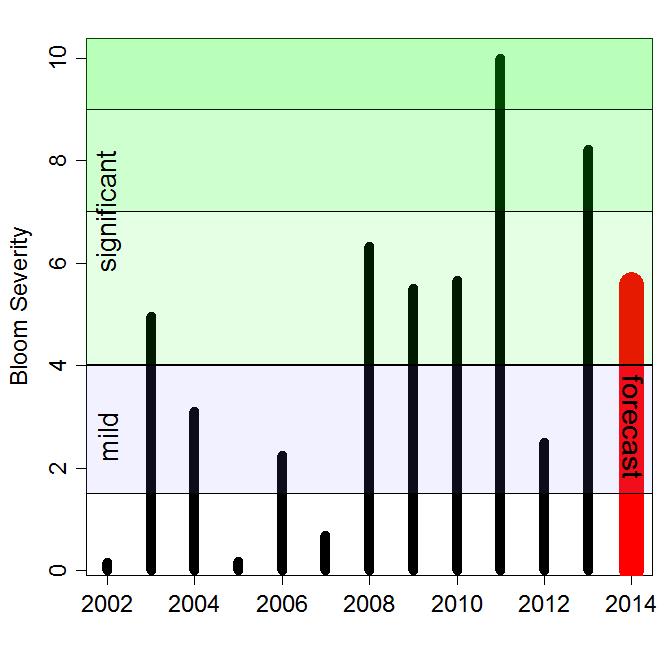 Separately, a jointly funded University of Michigan Water Center and NOAA Great Lakes Environmental Research Laboratory (GLERL) independent HAB experimental model concurs with the 2014 forecast.​ In addition to the satellite monitoring, GLERL, Ohio State University’s Sea Grant program and Stone Laboratory, Heidelberg University, the University of Toledo, and Ohio EPA will be collecting key measurements from the lake as the summer progresses. Those results will provide valuable information to regional managers and assist NCCOS scientists in further refining the accuracy of this forecast’s models.

“Issuing and evaluating these seasonal forecasts improves our understanding of how the blooms form, which leads to strategies to reduce their impacts,” said Richard Stumpf, Ph.D., NOAA’s ecological forecasting applied research lead at NCCOS. “Our academic partnerships also support us in making improvements to the forecast, further helping managers monitor the bloom, and informing the public of where and when they can best use this great lake.”

Featured image: Satellite image of 2011 bloom, the worst bloom in recent years, which impacted over half of the lake shore. Credit: MERIS/ESA, processed by NOAA/NOS/NCCOS