A new analysis of NASA satellite data shows Africa's Congo rainforest, the second-largest tropical rainforest in the world, has undergone a large-scale decline in greenness over the past decade.

The study, led by Liming Zhou of University at Albany, State University of New York, shows between 2000 and 2012 the decline affected an increasing amount of forest area and intensified. The research, published Wednesday in Nature, is one of the most comprehensive observational studies to explore the effects of long-term drought on the Congo rainforest using several independent satellite sensors.

"It's important to understand these changes because most climate models predict tropical forests may be under stress due to increasing severe water shortages in a warmer and drier 21st century climate," Zhou said.

Scientists use the satellite-derived "greenness" of forest regions as one indicator of a forest's health. While this study looks specifically at the impact of a persistent drought in the Congo region since 2000, researchers say that a continued drying trend might alter the composition and structure of the Congo rainforest, affecting its biodiversity and carbon storage.

Previous research used satellite-based measurements of vegetation greenness to investigate changes in the Amazon rainforest, notably the effects of severe short-term droughts in 2005 and 2010. Until now, little attention has been paid to African rainforests, where ground measurements are even sparser than in the Amazon and where droughts are less severe but last longer.

To clarify the impact of long-term drought on the Congo rainforest, Zhou and colleagues set out to see whether they could detect a trend in a satellite measure of vegetation greenness called the Enhanced Vegetation Index. This measure is developed from data produced by the Moderate Resolution Imaging Spectroradiometer (MODIS) instrument on NASA's Terra satellite. The scientists focused their analysis on intact, forested regions in the Congo basin during the months of April, May and June each year – the first of the area's two peak rainy and growing seasons each year.

The study found a gradually decreasing trend in Congo rainforest greenness, sometimes referred to as "browning," suggesting a slow adjustment to the long-term drying trend. This is in contrast to the more immediate response seen in the Amazon, such as large-scale tree mortality, brought about by more episodic drought events.

The browning of the forest canopy is consistent with observed decreases in the amount of water available to plants, whether that is in the form of rainfall, water stored in the ground, water in near-surface soils, or water within the vegetation.

These changes in available water were detected in part with NASA satellites including the NASA/JAXA Tropical Rainfall Measuring Mission, NASA's Quick Scatterometer (QuikScat), and NASA's Gravity Recovery and Climate Experiment, a joint mission with the German Aerospace Center.

"Combining measurements from different sensors has given us more confidence in the results of the MODIS data and provided us with insights into the environmental and physiological mechanisms of the browning observed by the MODIS data," said co-author Sassan Saatchi of NASA's Jet Propulsion Laboratory (JPL) in Pasadena, California.

Climate factors known to affect vegetation growth were also in line with the observed browning. Land surface temperatures, for example, were observed to increase over most of the study area. Decreased cloudiness allowed more solar radiation to reach the plants, which typically promotes photosynthesis, but in this case it likely posed an extra stress on the plants from the resulting depletion of soil moisture. 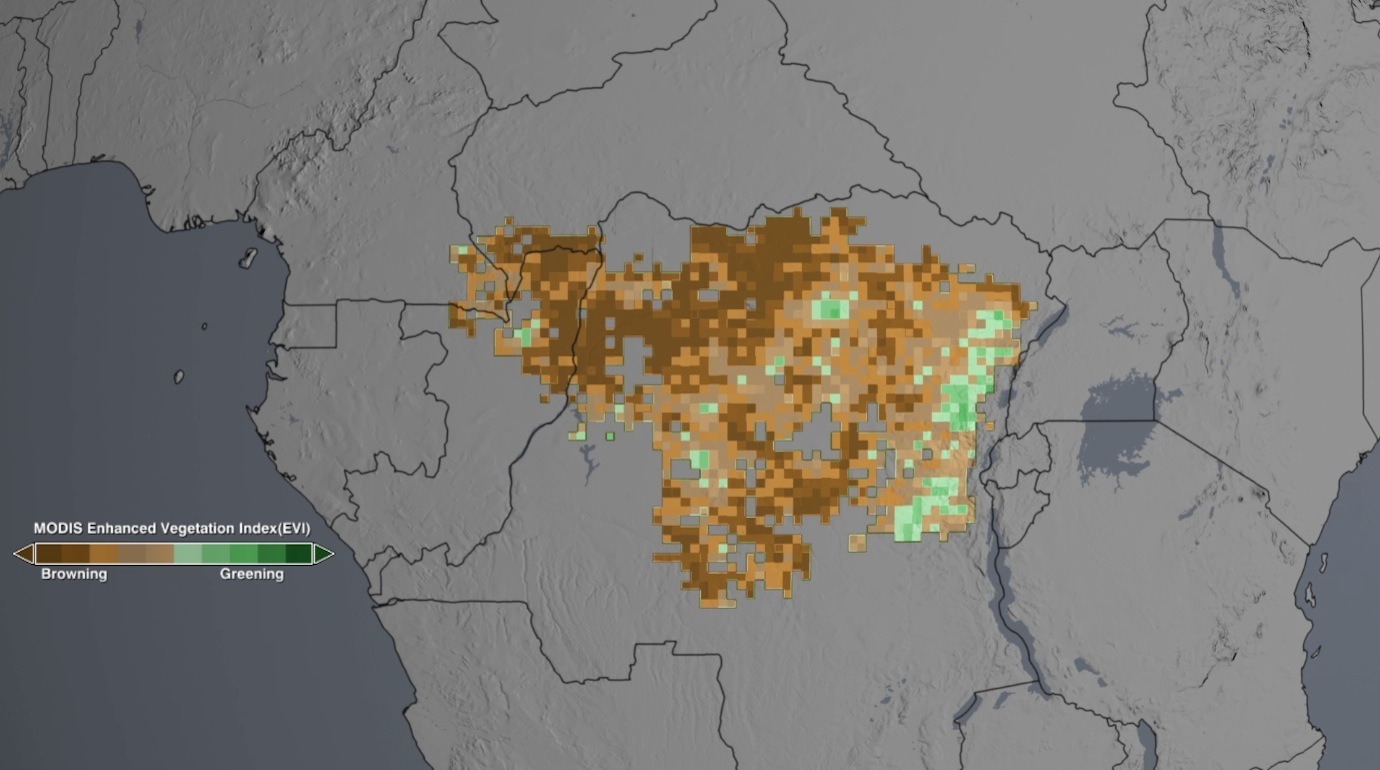 In the Congo rainforest, a browning trend (brown) dominates smaller areas that show a greening trend (green) during April, May and June each year from 2000 to 2012. Image credit: NASA Goddard's Scientific Visualization Studio

"Forests of the Congo basin are known to be resilient to moderate climate change because they have been exposed to dry conditions in the past few hundred years," Saatchi said. "However, the recent climate anomalies as a result of climate change and warming of the Atlantic Ocean have created severe droughts in the tropics, causing major impacts on forests."

How the changes affect individual plant species in the area remains to be seen. For example, drier conditions may favor deciduous trees at the expense of evergreen trees.

"Our assessment is a step toward an improved understanding of how African rainforests respond to increasing drought," Zhou said. "We need to consider the complex range of processes affecting different tropical rainforest species before we can fully assess the future resilience of tropical forests."