European Space Agency (ESA) launched Sentinel-1A satellite on April 3, 2014 which opened a new page in the implementation of Copernicus, the largest civil Earth observation programme ever conceived​ and the second EU flagship space initiative after the Galileo positioning system. It's first images are now available to the public.

Rather aptly, the first image shows Brussels in Belgium, the seat of the European Commission. It was captured on April 12, just one day after the satellite was put into its operational attitude, and demonstrates the potential of Sentinel-1A’s radar vision.

Acquired in the satellite’s ‘strip map’ mode with a swath width of 80 km, it clearly captures the dense urban environment of Brussels shown in white in the middle of the picture. Antwerp can be seen in the top left in red –blue colors and the greens depict vegetation in the surrounding areas. Waterways and low-reflective areas such as airport runways appear black.

Among other applications, images such as this will be used for urban planning, for monitoring agriculture, for mapping deforestation and for managing water resources. 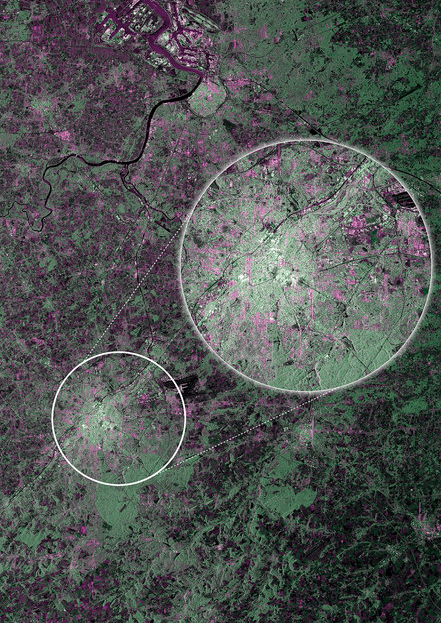 Acquired on April 12, 2014 at 17:18 UTC, just nine days after launch, this first image from Sentinel-1A captures Brussels and surrounds in Belgium. It was acquired in the satellite’s ‘strip map’ mode, which has a swath width of 80 km, and in dual polarisation. The image also shows a more detailed view of the city in the ‘zoom in’. Antwerp harbour is also visible in the top left. The green colours correspond to vegetation, red–blue to urban areas, white to high-density urban areas and black to waterways and low-reflective areas such as airport runways. Image credit: ESA

Since it was launched, Sentinel-1A has undertaken a complicated routine to deploy its 12-m long radar and two 10-m long solar wings, as well as passing a series of initial instrument checks.

The satellite is not yet in its operational orbit, nor is it calibrated for supplying true data. These tasks will be carried out during the commissioning phase, which will take about three months to complete. This preliminary set of images simply offer a taster of what’s to come.

This first set of acquisitions also included an area in Namibia that is currently flooded by the Zambezi river. The team tasked the satellite to image the flood as would be routine in the case of an emergency when the mission is fully operational.

Sentinel-1A’s ability to ‘see’ through cloud and rain and in pitch darkness make it particularly useful for monitoring floods and for offering images for emergency response. In fact, this area of the Caprivi plain was shrouded in thick cloud when the satellite acquired the image on April 13. 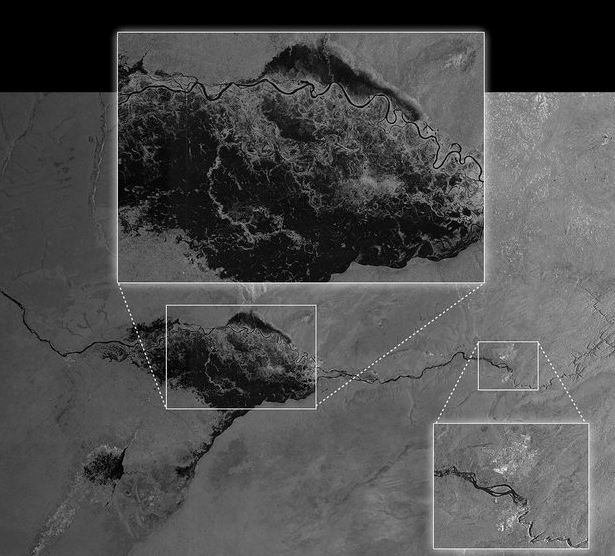 Acquired on April 13, 2014 at 03:50 UTC by Sentinel-1A, this image shows the extent of flooding in the Caprivi plain from the Zambezi River in Namibia. Sentinel-1A acquired this image in its main ‘Interferometric Wide Swath’ mode with a swath width of 250 km and in dual polarisation. Victoria Falls is also featured in the image, further east along the Zambezi River. The image was downloaded two hours after acquisition and the resulting products were available in less than an hour. Such images can be taken in adverse weather conditions and during the dark, demonstrating the value of Sentinel-1’s radar vision. Image credit: ESA

One of the images acquired on the same day focuses on Pine Island Glacier in Antarctica. This glacier is in a state of ‘irreversible retreat’ so it is important to keep a very close eye on glaciers such as these as they lose ice to the ocean. 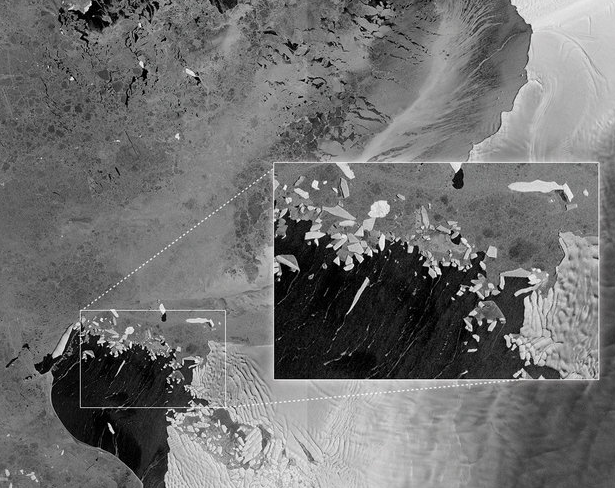 Acquired on April 13, 2014 at 09:03 UTC this image covers parts of Pine Island Glacier  and Thwaites Glacier in West Antarctica. This image is among the first from Sentinel-1A, which was launched on 3 April. It was acquired in ‘Interferometric Wide Swath’ mode with a swath width of 250 km and in single polarisation. With Pine Island Glacier in a state of irreversible retreat, the Sentinel-1 mission is set to be an excellent tool for monitoring such glaciers as well as for providing timely information on many other aspects of the polar regions, such as sea ice and icebergs. Image credit: ESA

Another image shows a transect over the northern part of the Antarctica Peninsula. 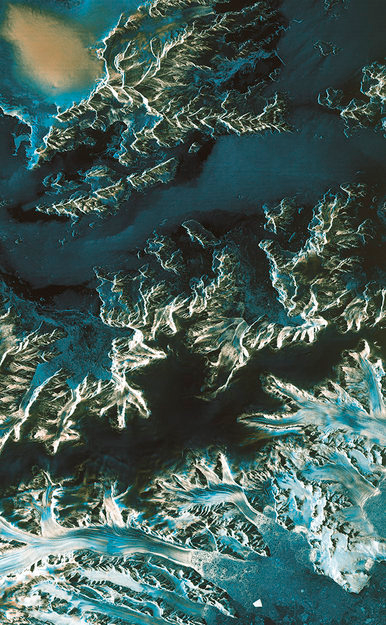 Acquired on April 13, 2014 at 23:57 UTC by Sentinel-1A, this image shows a transect over the northern part of the Antarctica Peninsula. It was acquired in the satellite’s ‘strip map’ mode with a swath width of 80 km and in dual polarisation. The colours indicate how the land, ice and water reflect the radar signal differently. Image credit: ESA

Sentinel-1A mission is the first of six families of dedicated missions that will make up the core of Europe’s Copernicus environmental monitoring network. Copernicus will provide operational information on the world’s land surfaces, oceans and atmosphere to support environmental and security policymaking and the needs of individual citizens and service providers.