After powerful M 8.2 subduction zone earthquake that struck off the coast of Tarapaca, Chile on April 1, 2014 the region is still unstable and strong aftershocks continue. This mega earthquake followed an earthquake sequence in the region which started in January 2014 and increased since the M 6.7 earthquake of March 16th. From January 1st until April 2nd there have been 6 M6+ , 49 M5+ and 186 M4+ earthquakes recorded in this region according to EMSC.

On April 3rd at 02:43 UTC, USGS reported another massive earthquake measuring M 7.6 on the Richter scale. This quake occurred as a result of thrust motion at a depth of approximately 40 km and was located 23 km south of the city Iquique.

The location and mechanism of the earthquake are consistent with slip on the plate boundary interface, or megathrust, between the Nazca and South America plates. At the latitude of the event, the Nazca plate is subducting beneath South America at a rate of ~73 mm/yr.

This earthquake is an aftershock of the M 8.2 subduction zone earthquake that occurred April 1, 2014. The M 8.2 event triggered a tsunami with measured heights near 2 meters along the northern Chile and southern Peru coasts. Since the M8.2 event, 47 aftershocks ranging from M 4.2 to this M 7.6 event have occurred, including a M 6.4 on April 2.

This segment of the subduction zone, known as the Iquique or Northern Chile seismic gap, last ruptured during the 1877 with M 8.8 Iquique earthquake.  It was preceded immediately to the north by an M 8.8 earthquake in 1868.

Other recent large plate boundary ruptures bound the possible rupture area of the April 1 event, including the 2001 M 8.4 Peru earthquake adjacent to the south coast of Peru to the north, and the 2007 M 7.7 Tocopilla, Chile and 1995 M 8.1 Antofagasta, Chile earthquakes to the south. Other nearby events along the plate boundary interface include an M 7.4 in 1967 as well as an M 7.7 in 2005 in the deeper portion of the subduction zone beneath inland Chile. 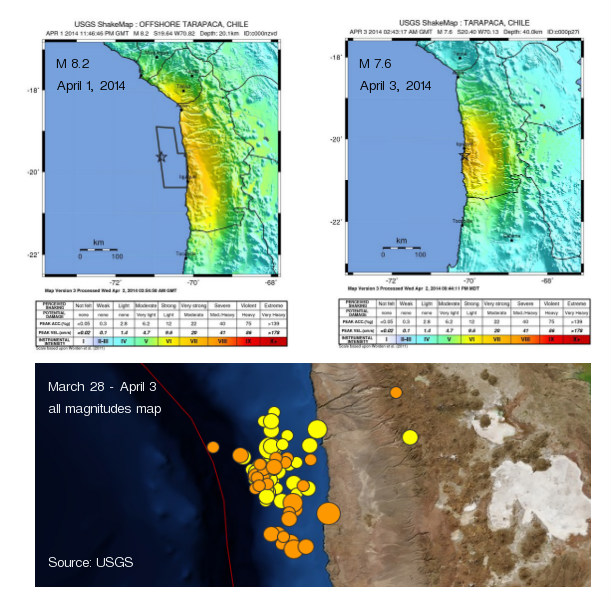 The following videos were recorded on April 1, 2014: