At 09:00 UTC today, Amara's maximum sustained winds were near 62 km/h (35 knots/40 mph). The storm's course is forecast to change as a new steering influence comes into play.

Upper-level analysis indicates the system is now located underneath the subtropical ridge axis which is providing low (05-10 knots) vertical wind shear (vws) and good equatorward outflow although the poleward outflow channel has diminished. Tropical Cyclone Amara continues to move slowly as it is located in a weak steering environment, between two subtropical ridges.

The system is expected to begin to slowly accelerate to the west in the next 24 hours and remain on a this slow westward track under the influence of a building subtropical ridge to the southeast. By tau 96 a deep mid-latitude trough will pass south of the cyclone and erode the western periphery of the steering subtropical ridge.

During this time Amara will begin to slow down and dip southwest. Gradual intensification is expected under the favorable upper level conditions as well as supportive 26 to 27 degree sea surface temperatures (ssts). As it approaches the waters northeast of Mauritius, the combined effects of warmer ssts (28 degrees Celsius) and increased poleward outflow, should cause intensification to 75 knots.  Maximum significant wave height at 18:00 UTC today was 3.9 meters (13 feet). 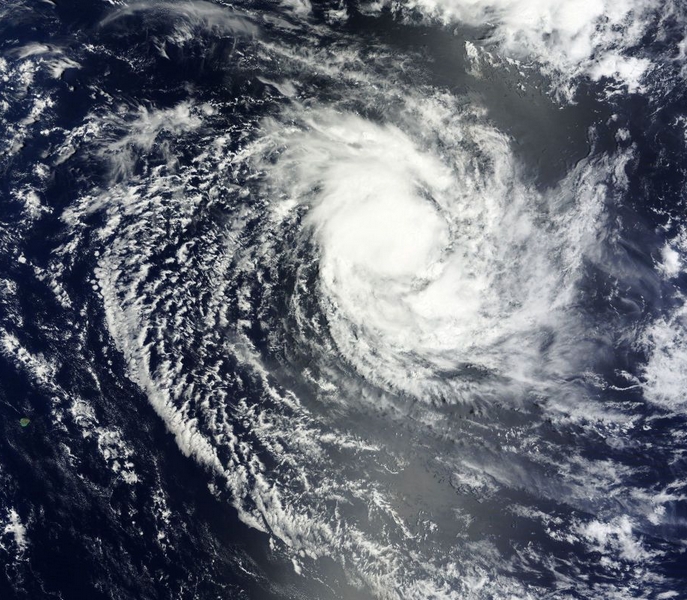 NASA's TRMM and Aqua satellites flew overhead shortly after formation and provided visible and rainfall data on the intensifying storm.

TRMM captured data on rainfall rates occurring in Tropical Cyclone Amara on December 17 at 05:52 UTC and saw heavy rain occurring around the center and northwestern quadrant of the tropical storm. Rainfall rates in those areas topped 50 mm/2 inches per hour.

Aqua satellite passed over the storm and MODIS captured a visible image of newborn Tropical Cyclone Amara at 08:20 UTC. Image revealed the storm had good circulation. 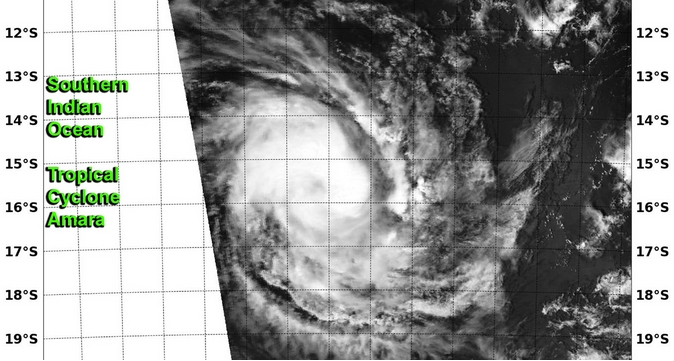 In four days, by December 21, a strong mid-latitude trough, or elongated area of low pressure, is expected to pass south of the cyclone, slow it down and dip it toward the southwest (Goddard).