The Mars Atmosphere and Volatile EvolutioN (MAVEN) mission is scheduled for launch today, November 18, 2013. The two-hour launch window opens at 18:28 UTC. This will be the first mission devoted to understanding the Martian upper atmosphere and what went wrong with it.

Today, Mars is a cold and barren desert world, with no sign of life, at least on the surface. However, billions of years ago when the Red Planet was young, it appears to have had a thick atmosphere that was warm enough to support oceans of liquid water – a critical ingredient for life.

Liquid water cannot exist pervasively on the Martian surface today due to the low atmospheric pressure and surface temperature, although there is evidence for spurts of liquid flow that perhaps consist of a briny solution with reduced freezing temperature, according to Joseph Grebowsky of NASA's Goddard Space Flight Center in Greenbelt, Md. Water under current Martian atmospheric conditions can be ice or sublimate directly into vapor without staying in a liquid phase.

"There are characteristic dendritic structured channels that, like on Earth, are consistent with surface erosion by water flows. The interiors of some impact craters have basins suggesting crater lakes, with many showing connecting channels consistent with water flows into and out of the crater. Small impact craters have been removed with time and larger craters show signs of erosion by water before 3.7 billion years ago. And sedimentary layering is seen on valley walls. Minerals are present on the surface that can only be produced in the presence of liquid water, e.g., hematite and clays," he said.

MAVEN will determine how much of the Martian atmosphere has been lost over time by measuring the current rate of escape to space and gathering enough information about the relevant processes to allow extrapolation backward in time. 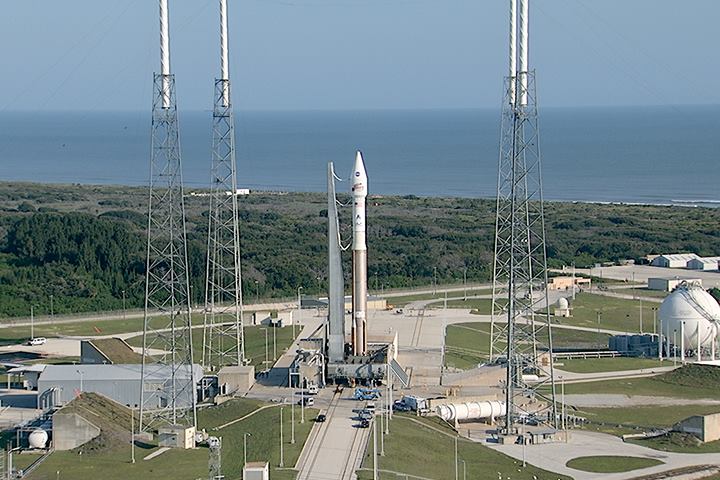 Weather forecast remains 60% “Go” for MAVEN to spend its last moments on Earth atop the United Launch Alliance Atlas V rocket. ​The main concerns are for cumulus clouds, disturbed weather and thick clouds in the launch area.
Image credit: NASA

Live commentary and prelaunch coverage starts at 16:00 UTC (11 a.m. EST) on NASA's Launch Blog at http://blogs.nasa.gov/maven and on NASA Television at http://www.nasa.gov/ntv.