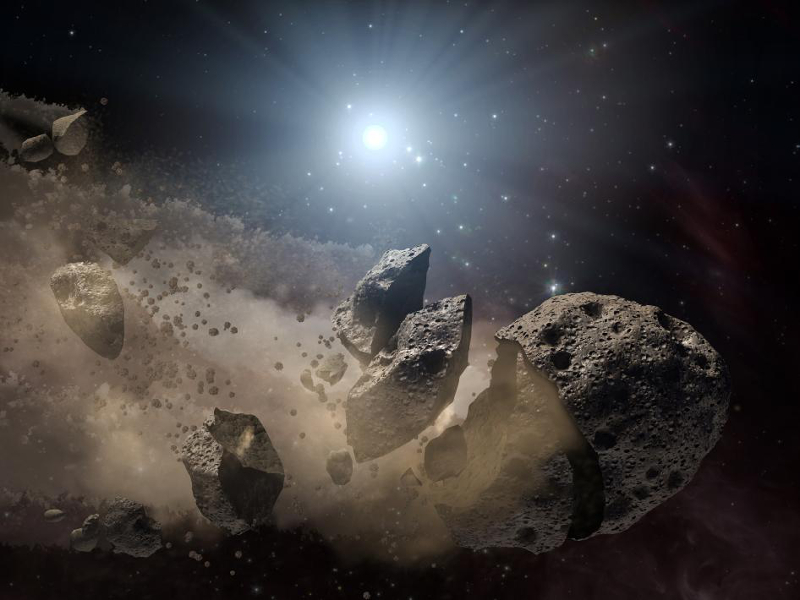 A huge asteroid that wiped out the dinosaurs may not have been the only cosmic event to cause mass extinctions or change Earth’s climate. Tiny minerals leftover from many smaller meteorites could provide the geological evidence needed to show how rocks falling from the sky changed the course of life’s evolution on our planet more than just once.

The tiny minerals called spinels — about the size of a sand grain — can survive the harshest weather and chemical changes on Earth’s surface. Swedish researchers hope to collect enough of the spinels in different parts of the world to connect the dots between the breakup of huge asteroids in space and certain extinction or climate events during Earth’s history.

“I think it would be very interesting if our spinel approach in the long run could provide empirical evidence for how asteroid showers in the inner solar system correlate with the onset of ice ages,” said Birger Schmitz, a marine geologist at Lund University in Sweden.

The hunt for spinels has led Schmitz and his colleagues to dissolve tons of rocks in acid over the past decade or so — many of the rocks originating from a commercial limestone quarry in Thorsberg, Sweden. Such a tactic could reveal convincing patterns in the geological records that scientists cannot piece together from the occasional fossilized meteorite or rare impact crater.

Most meteorites that have fallen to Earth end up disappearing without becoming fossilized or leaving an impact crater for scientists to find. That has made it virtually impossible for scientists to recover enough evidence to back theories about how astronomical events have tied into Earth’s history.

“We know that in desert areas on Earth, meteorites typically decompose within 20 to 30 thousand years,” Schmitz explained. “In wetter areas, decomposition goes faster.”

But the vanishing meteorites do leave behind different types of spinels, including extremely tough chromium or alumina oxides. The chemical and isotopic fingerprints of such spinels reveal what type of meteorites they originate from. Scientists now know that extraterrestrial spinel minerals can be found in the layers of built-up sediment of almost any age over the past 3.5 billion years.

Such spinels can reveal differences in the rate and types of meteorites falling to Earth at different times in the planet’s history, Schmitz said in the June issue of the journal Chemie der Erde. They could also reveal more about the chemical makeup of asteroids, or help scientists understand if any asteroid breakups affected life on Earth in the past.

The spinel record could reveal more extinction events with extraterrestrial links than just the mass dinosaur extinction. An earlier mass extinction during the Frasnian-Fammenian period about 372 million years ago coincides with at least three large impact craters.

“There are many large craters on Earth associated with this event, but no close connection between one large impact and the extinction event has yet been shown,” Schmitz said.

But falling space rocks may bring more than just destruction to Earth. Perhaps the greatest explosion of new ocean life in Earth’s history took place during the Great Ordovician Biodiversification Event about 470 million years ago — a period coinciding with the largest known asteroid breakup in the solar system’s asteroid belt over the last 3 billion years. Schmitz and colleagues discovered a rapid increase in the number of spinels found in the limestone rock layers marking the start of that diversification period at sites in Sweden, western Russia and central China. They speculate that the asteroid breakup led to frequent impacts on Earth by kilometer-sized asteroids that could have spawned the resulting changes in the diversity of life.

Another theory links asteroid showers to Earth’s three most recent major ice ages that occurred about every 250 to 300 million years. No definitive proof exists yet, but the ice age periods roughly coincide with the sun’s orbit around the galaxy every 225 to 250 million years — an event that could expose Earth to more frequent meteorite falls at certain periods. The study of spinels could help prove such theories right or wrong in the coming years.

Building a record of Earth’s history through extraterrestrial spinels still represents a fairly new idea, despite scientists having known about spinels for several decades. But Schmitz is looking forward to continuing the hunt for spinels with a specially designed lab at Lund University. The new lab will use acid to dissolve about 5 to 10 tons of sedimentary limestone per year in search of spinels — a big step up from how Schmitz’s group handled just over one tenth of a ton per year about 15 years ago. Industrial-grade lab equipment includes acid-resistant pumps for injecting acid into large plastic barrels holding different rock samples.

Schmitz’s approach has slowly won over skeptics in the meteorite research community, said Philipp Heck, associate curator of meteoritics and polar studies at the Field Museum of Natural History in Chicago. He added that the spinel approach would prove most effective when sediment layers representing past ages of the Earth are highly condensed and the rate of meteorites hitting the Earth was much higher than it is today.

“This is certainly a very useful approach to study the extraterrestrial record of ordinary chondrites in sediments,” Heck said. “This approach needs now to be applied to different types of meteorites.”

But geologists won’t need an entirely new lab to start getting in on the action by tackling smaller amounts of rocks that could hold hidden extraterrestrial treasure.

“The best thing is that all you need for the identification of the extraterrestrial spinels is a regular scanning electron microscope with an attached standard-type element identification system (EDS),” Schmitz said. “Most geology departments have this equipment.”