New research shows a "warm blob" of surface water in the Atlantic played a significant role on the wild climate swings in Greenland during the last ice age. Researchers used the foraminifera fossils to compare the changes in the ocean temperature with the iceberg activity. Such abrupt climate swings aren't representative of the human-induced climate change, but can be used to improve and test our current global climate models.

According to the data stored in ice cores and ocean sediments, Greenland's climate had abruptly switched from cold to warm, and vice versa for 25 times in the period between 20 000 and 70 000 years ago. These climate swings, known as Dansgaard-Oescheger events were characterized by extreme changes in average temperature. The cold period lasted for centuries while the warming periods were much shorter, and lasted only a few decades. Newest research indicates the tempo of these climate swings was dictated by warm Atlantic ocean currents.

Atlantic currents have a similar pattern today, as they did during the past ice age, as the Gulf Stream pushes the warmer water masses from the southern and tropical Atlantic toward the north, cools down when it reaches the Nordic seas, after which the cold descending water masses flow back to repeat the cycle again.

"Most researchers agree that these [climate] shifts were controlled from the Northern Hemisphere through an 'on and off switch' of deep-water formation in the Nordic seas. This study clarifies that the whole of the Atlantic was involved," said Tine Rasmussen, the lead author of the research, and a professor at the Centre for Arctic Gas Hydrate, Environment and Climate in Tromsø, Norway.

"During cold periods, the surface and intermediate water of the Atlantic from Antarctica to Iceland gradually warmed, finally penetrating below the sea ice and into the Nordic seas. Once the ice was gone, the pump started up again, bringing additional warm water into the Nordic seas. And we got a warmer period for 50 years," she said. 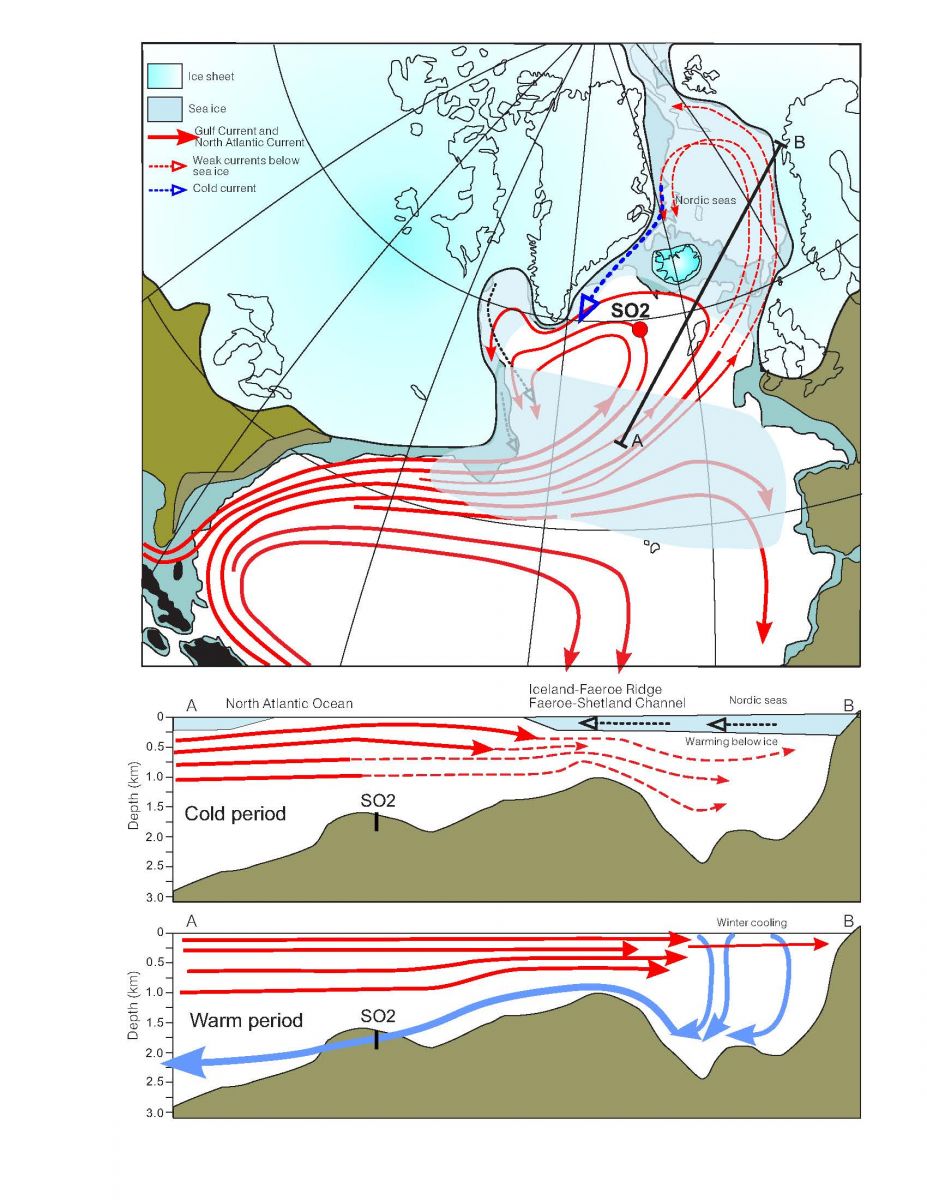 To collect the sediment cores the scientist have chosen an area close to both the Nordic seas and Greenland ice cap, while still representative of the open Atlantic, located southeast of Greenland. They examined the foraminifera fossils to estimate past ocean temperatures and the compared the observed changes to the arrival and disappearance of iceberg-carried debris.

The study confirmed the iceberg activity followed the rapid warming events which could indicate the warm water broke up sea ice and calving glaciers in the North Atlantic. The process brought the icebergs and fresh water into the sea, which caused the deep-water currents to slow down.