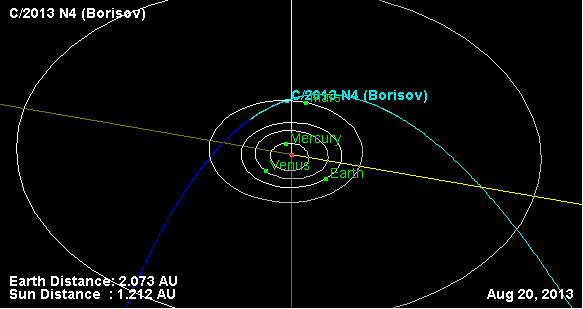 Ukrainian amateur astronomer Gennady Borisov discovered a new comet near the bright star Capella in the constellation Auriga. The comet was discovered on July 8, 2013 during a "Southern Night" star party in Crimea, Ukraine. Confirmation of the comet had to wait until July 13, 2013, when it was officially designated C/2013 N4 (Borisov).

Comet C/2013 N4 Borisov is currently flying through Auriga and will continue to brighten on its journey to the sun. The comet`s orbit is still being calculated by astronomers, but it will likely reach perihelion (its closest point to the sun) on August 20, 2013 when it will be roughly 182.7 million kilometers from the sun. Initial predictions are that the comet will probably reach no more than magnitude 12 while reaching the closest point to our planet on August 11, 2013, at distance roughly 310 million kilometers of by Earth.

Image showing the position of comet Borisov on August 11, 2013 when the comet will be nearest to Earth (Credit:NASA\JPL Small-Body Database Browser)

Gennady Borisov used an 8 inch telescope with a CCD camera to find the comet. Gennady`s discovery is quite an achievement regarding that most of the comets in recent years have been found by robotic, automated systems like PANSTARRS (Panoramic Survey Telescope & Rapid Response System), LONEOS (Lowell Observatory Near-Earth-Object Search) and LINEAR (Lincoln Near-Earth Asteroid Survey) which scan the sky constantly searching for near earth objects including comets. When those systems spot an object that might be a comet they alert professional astronomers which then just confirm the comet and give it a number and a name.

So it is really fascinating that an amateur astronomer beat those expensive, professional projects in this comet discovery, also showing how easily and loosely the term "amateur astronomer" is used nowadays.

Featured image: Position of comet Borisov on August 20, 2013 when the comet will be at perihelion (Credit: NASA\JPL Small-Body Database Browser)