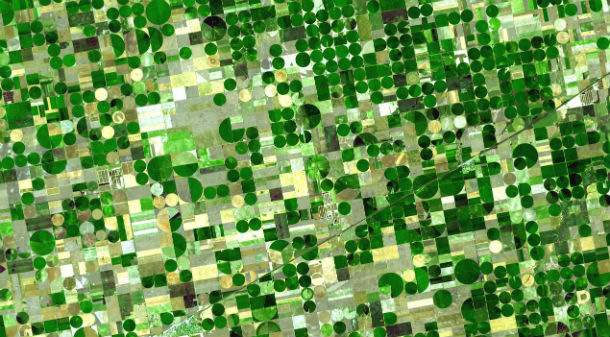 The world faces a looming and growing agricultural crisis. Our planet is experiencing rising demands for crop production by increasing human population, meat and dairy consumption from growing affluence, and biofuel consumption. New research by Deepak Ray and team from Institute on the Environment (IonE) at the University of Minnesota shows current growth in global crop yields are not increasing quickly enough to support estimated global needs in 2050.

Numerous studies have shown that feeding a more populated and more prosperous world will roughly require a doubling of agricultural production by 2050. Studies estimate that global agricultural production may need to increase 60-110% to meet increasing demands and provide food security. About 870 million people worldwide are currently chronically undernourished.

Research team compiled over 2 million yield observations from agricultural census records across 13,500 counties and other sub-national political units. According to current study, yields of four key crops – maize, rice, wheat and soybean – are increasing only 0.9-1.6% every year. New estimates predict production of these crops would likely increase 38-67 % by 2050, rather than the estimated requirement of 60-110%. 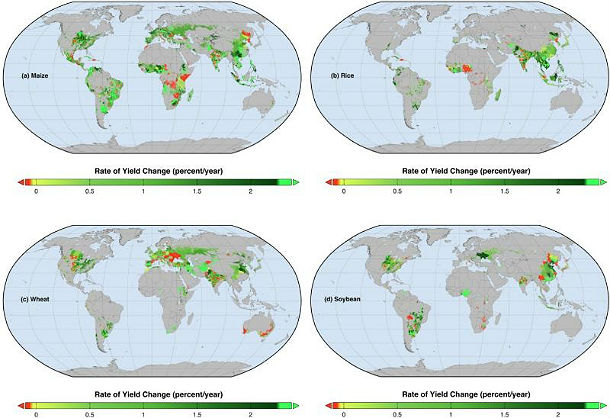 Maps of observed rates of yield change (%) per year. (a) maize, (b) rice, (c) wheat and (d) soybean. Red areas are where yields are declining, whereas the fluorescent green areas are where rates of yield increase – if sustained – would double production by 2050.  (Courtesy of Deepak Ray/Institute on the Environment)

The analysis maps global regions where yield improvements are on track to double production by 2050 and areas where investments must be targeted to increase yields. New study explains that boosting crop yields is considered a preferred solution to meet demands, rather than clearing more land for agriculture. They note that additional strategies, such as reducing food waste and changing to plant-based diets, can also help reduce the large estimates for increased global demand for food.

The study was published in the open access journal PLOS ONE. 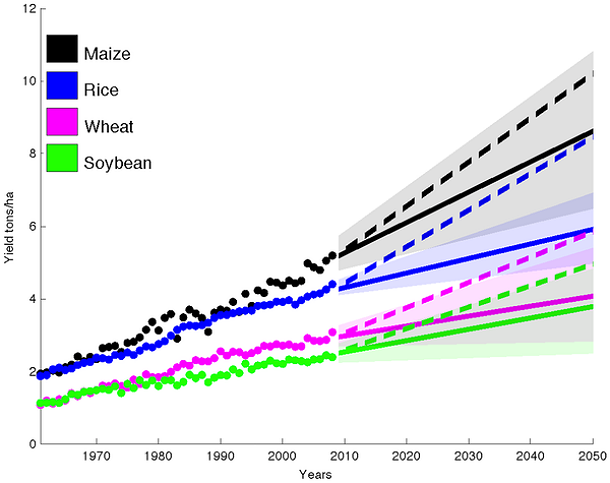 Observed area-weighted global yield 1961–2008 shown using closed circles and projections to 2050 using solid lines for maize, rice, wheat, and soybean. Shading shows the 90% confidence region derived from 99 bootstrapped samples. The dashed line shows the trend of the ~2.4% yield improvement required each year to double production in these crops by 2050 without bringing additional land under cultivation starting in the base year of 2008. (Credit: Deepak K. Ray/Nathaniel D. Mueller/Paul C. West/Jonathan A. Foley/ doi:10.1371/journal.pone.0066428)

"Clearly, the world faces a looming agricultural crisis, with yield increases insufficient to keep up with projected demands. The good news is, opportunities exist to increase production through more efficient use of current arable lands and increased yield growth rates by spreading best management practices. If we are to boost production in these key crops to meet projected needs, we have no time to waste." IonE director Jon Foley, a co-author on the study.

Due to population increases from ~6.7 billion in 2008 to ~8.0 billion in 2025, the 1.6% and 1.3% per year global maize and soybean yield improvements may result in no significant change to the per capita global maize and soybean harvests. However, by 2050 there could be an increase. The much lower rates of rice and wheat yield increases, 1.0% and 0.9% per year, respectively, may result in no change to the per capita rice and wheat harvests to 2050.

The production in top four global crops – maize, rice, soybean and wheat, is now responsible for directly providing about 43% of the global dietary energy and about 40% of its daily protein supply. Rice provides about 19% of dietary energy globally. Rice provides a higher percentage of total calories consumed in countries such as Dominican Republic, Costa Rica, Haiti, Sierra Leone, Nigeria, and North Korea, yet yields are declining, −0.1% to −3.2% per year.