Since the mid-20th Century, average global temperatures have warmed about 0.6°C (1.1°F), however, warming has not occurred equally everywhere. Temperatures have increased about twice as fast in the Arctic as in the mid-latitudes, a phenomenon known as “Arctic amplification.” 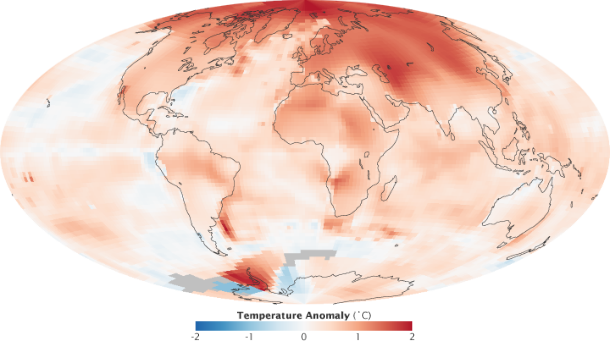 Credit: NASA image by Robert Simmon, based on GISS surface temperature analysis data including ship and buoy data from the Hadley Centre. Caption by Adam Voiland.

The global temperature mainly depends on how much energy the planet receives from the Sun and how much it radiates back into space. The amount of energy radiated by the Earth depends significantly on the chemical composition of the atmosphere, particularly the amount of heat-trapping greenhouse gases.

The loss of sea ice is main cause of faster Arctic warming. Losing sea ice reduces Earth’s albedo or the ratio of the outgoing solar radiation reflected by an object to the incoming solar radiation incident upon it. The ocean surface absorbs more heat from the Sun than the surface of snow and ice, so with melting of ice that reflects heat and light from the Sun, darker ocean is getting opportunity to amplify the warming trend , with a surface absorbs heat from sunlight rather than reflecting it back to space.

The storms transport heat from the surface to higher levels of the atmosphere, where global wind patterns sweep it toward higher latitudes. The abundance of thunderstorms creates a near-constant flow of heat away from the tropics, a process that dampens warming near the equator and contributes to Arctic amplification.

Polar amplification is not observed in the Antarctic, largely because the Southern Ocean acts as a heat sink and the lack of seasonal snow cover.