Earthquake swarm continues at Kamchatka Peninsula. Strong M 6.0 earthquake occurred off coast of Kamchatka at 01:55:08 UTC on May 21, 2013. The epicenter was located in sea, 136 km (84 miles) ESE of Petropavlovsk-Kamchatskiy, Russia at coordinates 52.505°N 160.470°E. USGS registered depth of 33.9 km while EMSC registered depth of 10 km. It was followed by little deeper M 4.9 seven minutes later. There was no tsunami warning issued.

Twelve more strong earthquakes were recorded in next couple of hours. All of them ranged M 4.5 – M 6.0. 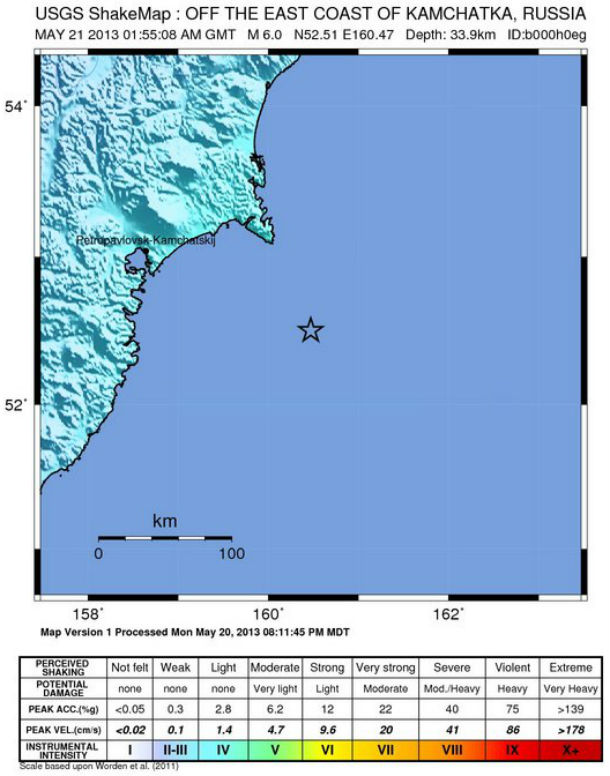 The most recent megathrust earthquake in the region was the November 15, 2006 M8.3 Kuril Island event, located in the central section of the arc. Prior to this rupture, this part of the subduction zone had been recognized as a seismic gap spanning from the northeastern end of the 1963 rupture zone to the southwestern end of the 1952 rupture. Two months after the 2006 event, a great (M8.1) normal faulting earthquake occurred on January 13, 2007 in the adjacent outer rise region of the Pacific plate. It has been suggested that the 2007 event may have been caused by the stresses generated from the 2006 earthquake. (USGS)