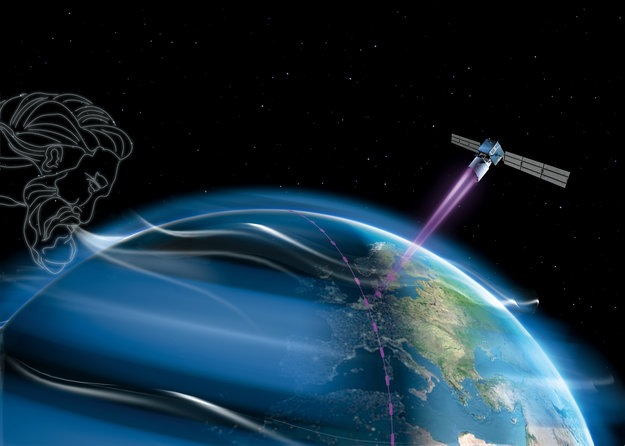 ESA's wind mission ADM-Aeolus is going to probe global atmosphere using novel UV laser technique. Undergone rigorous testing, the Aeolus satellite is equipped with innovative instruments to improve weather forecasts and contribute to climate research. With a central aim to further our knowledge of the Earth's atmosphere and weather systems, Aeolus itself is first of its kind to observe wind profiles from space and is due for launch next year.

Aeolus carries an innovative instrument called Aladin — an atmospheric laser Doppler instrument. It uses laser light scattering and the Doppler effect to gather data on wind. Using a laser, it beams high-energy UV light toward Earth through a telescope. The light then collides with molecules of gas, particles of dust and droplets of water in atmosphere. While light scatters in all directions, some of it reflects back to Aladin; which then records it. Thereafter, frequency of the received light can be compared with transmitted light's frequency for the Doppler effect. This way, the motion of the molecules in the atmosphere can be measured, revealing wind velocity.

Laser transmitter remained stable for three weeks while it produced 90 million UV laser shots during tests. It is being developed by Selex-ES in Italy. Considering that each shot is 5 MW, peaking at an intensity similar to that of a lightning strike and that this is repeated 50 times a second – the stress on the optical components that shape and guide the laser beam is tremendous. Chief laser engineer at Selex-ES, Alessandro d’Ottavi said,

“Bearing in mind the hurdles we’ve faced, this positive outcome is very important. The environment in space, the high laser power and the number of laser shots that the UV optics will have to withstand over the life of the mission all mean that the Aladin UV optics had to be pushed beyond the state of the art.” 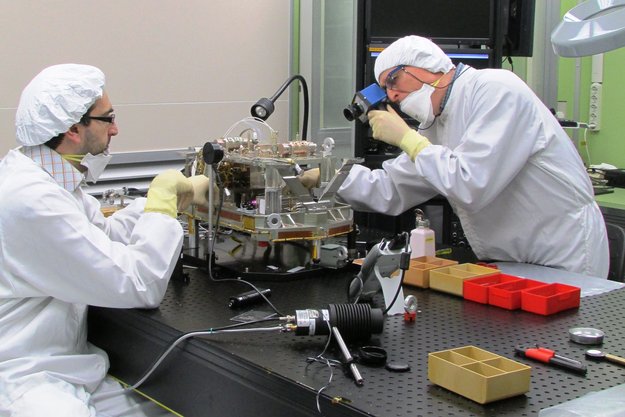 Integration of one of the laser transmitter flight models in an ISO5 cleanroom environment in the Selex-ES Pomezia facility. Credits: Selex-ES

For this reason, improvements to the laser resistance of the optical coatings had to be specially developed. ESA’s Aladin instrument manager, Denny Wernham elaborates,

“Last year’s endurance test indicated that during the course of millions of laser shots, very small areas of the UV optics could be damaged. This issue was tackled on multiple fronts: new UV coatings were developed, the energy density of the laser in the UV section was reduced while keeping the total output energy constant by improving the efficiency of the crystals that convert infrared to UV light, and it was decided that the new UV optics would be ‘screened’ to guarantee their performance.”

“With the many difficulties of the past, in particular the problems in the UV optics, we were being asked some tough questions, which we are now able to answer. We look forward to using the recent successful test as a springboard to the qualification and delivery of the first laser from Selex-ES this year, and by this stick to the schedule of launching this ground-breaking Earth Explorer mission in 2015.”

For this mission, scientists forged new technologies in many areas such as optics, opto-electronics, precision mechanics and thermo-mechanical design.

ADM-Aeolus will be a 3 year-long mission. The spacecraft will fly in a rather low Sun-synchronous orbit of 400 km and will always be in the dusk or dawn position. The wind will be measured at 90 degrees to the satellite ground track on the night side of the Earth. Data are sent to a ground station in Svalbard, Norway, every orbit. Thereafter, data will be processed into wind profiles and sent to various meteorological offices to be used in weather forecasts.

ADM-Aeolus will provide global observations of wind profiles from space to improve the quality of weather forecasts. This novel mission will also advance our understanding of atmospheric dynamics and climate processes.