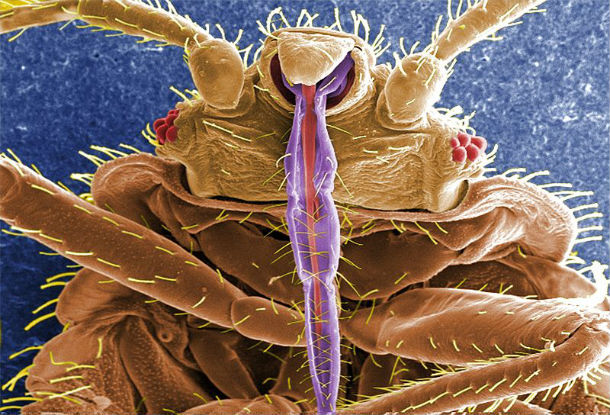 In the quiet of the night a female Cimex lectularius crawls out of her hiding place, lured by the CO2 gas and the warmth that your body emits. When she reaches a patch of your exposed skin, she uses her small sharp beak to pierce the flesh and suck up to six times her weight of blood. She prefers the face, neck and arms of a sleeping individual, especially the neck and jaw line, which are her favorite places to feed.

Afterwards, when she slurps enough of your blood, she crawls back under your mattress and up to seven bedbug males mate with her violently. Mostly the only evidence of her nocturnal, bloodsucking assault on you will be an itchy skin rash. If all of this sounds like a bad dream, or a nightmare, think yourself lucky. For tens of thousand people around the world its a nightly reality.

Bed bugs are parasitic insects of the cimicid family that feed exclusively on blood. The term most commonly refers to members of the genus Cimex of which Cimex lectularius, the common bed bug, is the best known as it prefers to feed on human blood although other Cimex species are specialized to other animals, e.g., bat bugs, C. pipistrelli (Europe), C. pilosellus (western US), and C. adjunctus (entire eastern US).

The name of the “bed bug” is derived from the preferred habitat of Cimex lectularius: warm houses and especially nearby or inside of beds and bedding or other sleep areas. Bed bugs are mainly active at night, but are not exclusively nocturnal. They usually feed on their hosts without being noticed.

A number of adverse health effects may result from bed bug bites, including skin rashes, psychological effects, and allergic symptoms. Diagnosis involves both finding bed bugs and the occurrence of compatible symptoms. 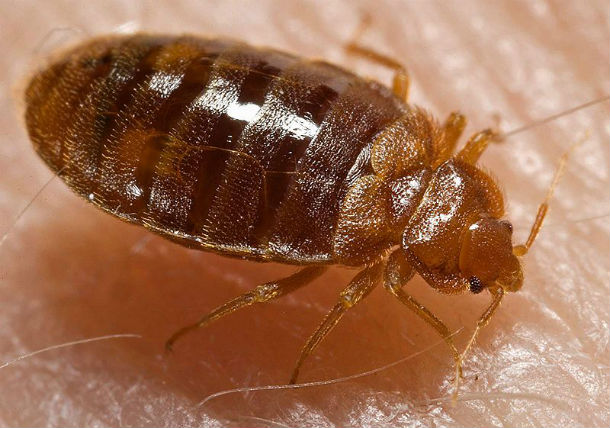 This 2006 photograph depicted an oblique-dorsal view of a bed bug nymph (?), Cimex lectularius, as it was in the process of ingesting a blood meal from the arm of a “voluntary” human host.(Credit: CDC/ Harvard University/Piotr Naskrecki)

Bed bugs have been known as human parasites for thousands of years. At a point in the early 1940s, they were mostly eradicated in the developed world, but have increased in prevalence since 1995. Because infestation of human habitats has been on the increase, bed bug bites and related conditions have been on the rise as well.

Adult bed bugs are light brown to reddish-brown, flattened, oval-shaped and have no hind wings. The front wings are vestigial and reduced to pad-like structures. Bed bugs have segmented abdomens with microscopic hairs that give them a banded appearance. Adults grow to 4–5 mm in length and 1.5–3 mm wide.

Bed bugs are obligatory hematophagous (bloodsucking) insects. Most species feed on humans only when other prey are unavailable. They obtain all the additional moisture they need from water vapor in the surrounding air.

A bed bug pierces the skin of its host with what is called a stylet fascicle, rostrum, or “beak”. This is a unit composed of the maxillae and mandibles, which have been modified into elongated shapes from a basic, ancestral style. The right and left maxillary stylets are connected at their midline and a section at the centerline forms a large food canal and a smaller salivary canal. The entire maxillary and mandibular bundle penetrates the skin. 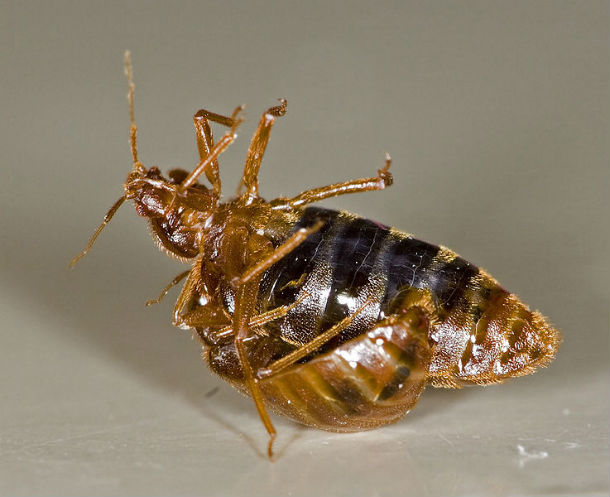 All bed bugs mate by traumatic insemination. Female bed bugs possess a reproductive tract that functions during oviposition, but the male does not use this tract for sperm insemination. Instead, the male pierces the female’s abdomen with his hypodermic genitalia and ejaculates into the body cavity.

Bed bugs have six life stages (five immature nymph stages and a final sexually mature adult stage). They will shed their skins through ecdysis at each stage, discarding their outer shells which are clear, empty exoskeletons of the bugs themselves. Bed bugs must molt six times before becoming fertile adults and must take a blood meal in order to complete each molt. Each of the immature stages lasts approximately a week, depending on temperature and the availability of food, and the complete life cycle can be completed in as little as two months (which is actually rather long compared to other ectoparasites— fleas, for example, can complete a cycle in as little as three weeks). Fertilized females with enough food will lay three to four eggs each day continually until the end of their life spans (about nine months under warm conditions), possibly generating as many as 500 eggs in this time.

Featured image: This digitally-colorized scanning electron micrograph (SEM) revealed some of the ultrastructural morphology displayed on the ventral surface of a bedbug, Cimex lectularius. (Credit: CDC)

Researchers define a new ocean-life zone, name it the Rariphotic