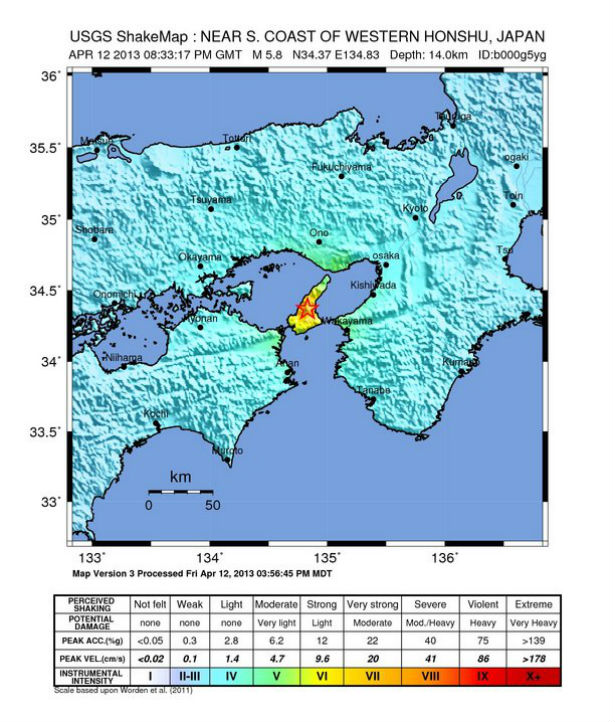 USGS and EMSC reported M 5.8 at the same depth. There was no tsunami warning issued.

FDMA Japan reports that 6 people have been reported injured so far.

USGS PAGER issued Yellow alert for estimated economic losses (42%). Past events with this alert level have required a local or regional level response. Millions of people have felt this earthquake.

Western Honshu recorded landslides, fires and liquefaction after series of recent earthquakes in this area. 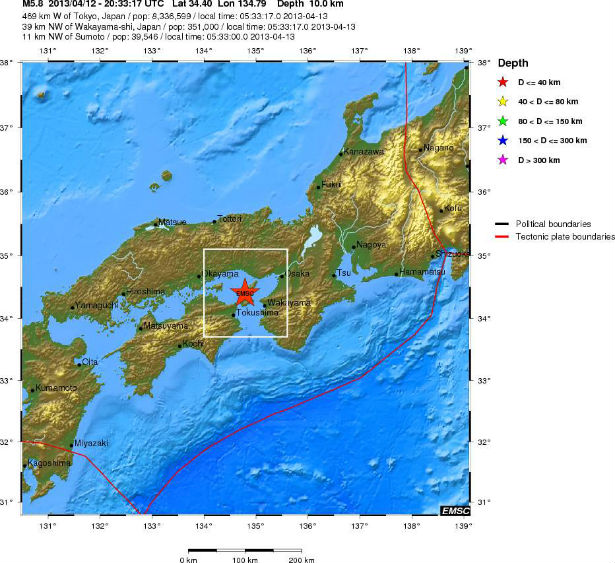 The April 12, 2013 (UTC) M5.8 earthquake in southern Japan occurred as result of east-west oriented thrust type motion near the junction of the predominantly right-lateral Arima-Takatsuki and Median Tectonic Lines between the islands of Shikoku and Honshu. The depth and style of faulting is consistent with shortening of the shallow continental crust due to slip partitioning in the upper plate of the Nankai Subduction Zone.

The broad scale tectonics of southern Japan are dominated by active subduction of oceanic crust beneath the Eurasian Plate. In the region of the April 12 event, the Philippine oceanic plate subducts northwestward beneath the islands of southern Honshu, Kyushu, and Shikoku at a rate of 66mm/yr, forming the Nankai Subduction Zone. In many subduction zone environments, active plate convergence is partitioned between thrust-type motion perpendicular to the subduction zone and strike-slip motion parallel to the subduction zone in the upper plate. Preliminary source location and mechanisms for the April 12 event are consistent with trench-parallel faulting in the vicinity of the Arima-Takatsuki  and Niigata-Kobe fault zones, which accommodate ~7mm/yr and ~6mm/yr of right-lateral fault motion respectively.  While the events mechanism is consistent with thrust-type motion, thrust- and normal-type earthquakes are common along major strike slip faults. To the north of the Nankai Subduction Zone, a complex plate triple junction forms before the Pacific oceanic plate subducts westward beneath northern Honshu and Hokkaido. This region was the source of the March 2011 Mw9.0 Tohoku-Oki earthquake and tsunami.