The Chelyabinsk meteor exploded in the atmosphere over Russia at approximately 9:20 am local time on February 15, 2013. The meteor flew out of the blue, literally from the direction of the Sun where no telescope could see it, and took everyone by surprise. The blast caused significant damage in the city, breaking thousands of windows and injuring more than 1 000 people. 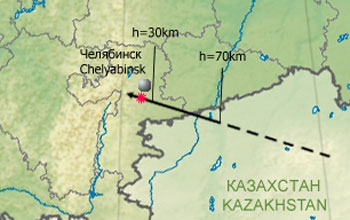 The meteor explosion generated ground motions and air pressure waves in the atmosphere.

"These recordings of seismic waves through the Earth, and sound waves through the atmosphere, are good examples of how these facilities can help global organizations better monitor earthquakes, clandestine nuclear tests and other threats."

Energy from the blast created pressure waves in the atmosphere that moved rapidly outward and around the globe. The blast also spread within the Earth as a seismic wave.

GSN stations in Russia and Kazakhstan show the ground-traveling wave as a strong, abrupt pulse with a duration of about 30 seconds.

The atmospheric waves–referred to as infrasound–were detected across a range of inaudible frequencies and were observed at great distances on infrasound microphones.

When the infrasound waves reached the eastern United States–after traveling 8.5 hours through the atmosphere across the Arctic from the impact site in Russia–they were recorded at TA stations at the Canadian border.

Infrasound sensors at TA stations along the Pacific coast and in Alaska also recorded the blast, but with signatures that were shorter and simpler than those recorded by stations in the mid-continent and along the southeastern seaboard.

The duration of the signals, and the differences between the waveforms in the east and west, scientists believe, are related to the way in which energy travels and bounces on its long path through the atmosphere.

The most telling information came from a network of infrasound sensors operated by the Comprehensive Test Ban Treaty Organization (CTBTO). Their purpose is to monitor nuclear explosions.

Infrasound is a type of very low-frequency sound wave that only elephants and a few other animals can hear. It turns out that meteors entering Earth's atmosphere cause ripples of infrasound to spread through the air of our planet. By analyzing infrasound records, it is possible to learn how long a meteor was in the air, which direction it traveled, and how much energy it unleashed.

The Russian meteor's infrasound signal was was the strongest ever detected by the CTBTO network. The furthest station to record the sub-audible sound was 15,000 km away in Antarctica.

Western Ontario Professor of Physics Peter Brown analyzed the data: "The asteroid was about 17 meters in diameter and weighed approximately 10,000 metric tons," he reports. "It struck Earth's atmosphere at 40,000 mph and broke apart about 12 to 15 miles above Earth's surface. The energy of the resulting explosion exceeded 470 kilotons of TNT." For comparison, the first atomic bombs produced only 15 to 20 kilotons.

Based on the trajectory of the fireball, analysts have also plotted its orbit. "It came from the asteroid belt, about 2.5 times farther from the sun than Earth," said Bill Cooke of NASA's Meteoroid Environment Office.

Infrasound records confirm that the meteor entered the atmosphere at a shallow angle of about 20 degrees and lasted more than 30 seconds before it exploded. The loud report, which was heard and felt for hundreds of miles, marked the beginning of a scientific scavenger hunt. Thousands of fragments of the meteor are now scattered across the Ural countryside, and a small fraction have already been found.

Preliminary reports, mainly communicated through the media, suggest that the asteroid was made mostly of stone with a bit of iron–"in other words, a typical asteroid from beyond the orbit of Mars," says Cooke. "There are millions more just like it."