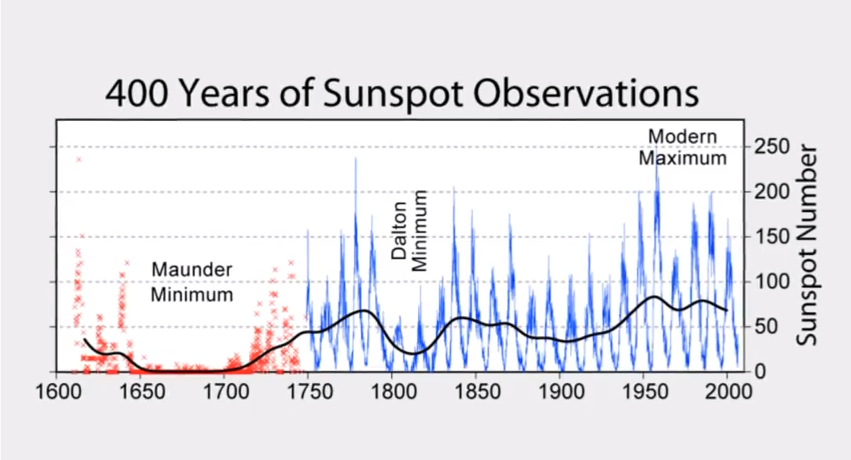 2013 was supposed to be the year of Solar Max, the peak of the 11-year sunspot cycle yet now that it has arrived solar activity is relatively low. Sunspot numbers are well below their values in 2011, and strong solar flares have been infrequent for many months. There is something unexpected happening with the Sun, many scientists agree.

“This is solar maximum,” he suggests. “But it looks different from what we expected because it is double peaked.”

From past observations we saw hat solar activity swings back and forth like a simple pendulum.  At one end of the cycle, there is a quiet time with few sunspots and flares.  At the other end, Solar Max brings high sunspot numbers and solar storms. It’s a regular rhythm that repeats every 11 years.

Astronomers have been counting sunspots for centuries, and they have seen that the solar cycle is not perfectly regular. For one thing, the back-and-forth swing in sunspot counts can take anywhere from 10 to 13 years to complete; also, the amplitude of the cycle varies.  Some solar maxima are very weak, others very strong.

Pesnell notes yet another complication: “The last two solar maxima, around 1989 and 2001, had not one but two peaks.”  Solar activity went up, dipped, then resumed, performing a mini-cycle that lasted about two years.

The same thing could be happening now.  Sunspot counts jumped in 2011, dipped in 2012, and Pesnell expects them to rebound again in 2013:

“I am comfortable in saying that another peak will happen in 2013 and possibly last into 2014,” he predicts.

Pesnell is a leading member of the NOAA/NASA Solar Cycle Prediction Panel, a blue-ribbon group of solar physicists who assembled in 2006 and 2008 to forecast the next Solar Max. At the time, the sun was experiencing its deepest minimum in nearly a hundred years.  Sunspot numbers were pegged near zero and x-ray flare activity flat-lined for months at a time.  Recognizing that deep minima are often followed by weak maxima, and pulling together many other threads of predictive evidence, the panel issued this statement:

“The Solar Cycle 24 Prediction Panel has reached a consensus. The panel has decided that the next solar cycle (Cycle 24) will be below average in intensity, with a maximum sunspot number of 90. Given the date of solar minimum and the predicted maximum intensity, solar maximum is now expected to occur in May 2013. Note, this is not a unanimous decision, but a supermajority of the panel did agree.”

Given the tepid state of solar activity in Feb. 2013, a maximum in May now seems unlikely. Scientists can’t know for sure what the Sun will do next.

It seems likely, though, that the end of 2013 could be a lot livelier than the beginning.