The Earth expects record-setting close flyby on February 15, 2013, when a chunk of space rock about 50 meters wide, designated as asteroid 2012 DA14 flies near our planet at a speed of about 7.8 km/s in a south-to-north direction with respect to the Earth. This asteroid will fly by us within 27 680 km of our planet’s surface.

There is no debate amongst asteroid astronomers about whether 2012 DA14 will impact us or not in 2013 – they all agree — with 100% certainty that there is no risk of collision.

Europe’s NEODyS asteroid database shows that a collision with Earth can be excluded quite safely at least for this century.

If you consider that the diameter of Earth is about 8 000 miles, this small object will miss us by more than twice that. On the Torino Impact Hazard Scale DA14 rates a “0″, which means that "the likelihood of a collision is zero, or is so low as to be effectively zero."

Its composition is unknown and its mass is thought to be of the order of 130 000 tonnes. It is believed that an object the size of DA14 actually impacted the Earth on June 30, 1908, the event also known as the "Tunguska event."

Asteroid 2012-DA14 was discovered on February 22, 2012, by La Sagra Sky Survey astronomers in southern Spain and reported to the Minor Planet Center.

2012 DA14's orbital period around the Sun is very similar to the Earth's – 368 days. This encounter will shorten 2012 DA14's orbital period to about 317 days, changing its orbital-class from Apollo to Aten. The close approach this year is the closest the asteroid will come for at least 3 decades. Click here to see an animation showing a full year in the life of 2012 DA14 and Earth as they travel around the Sun on their way to the February 2013 flyby.

The asteroid will fly closer to our planet than many weather and communications satellites — within about 4 Earth radii, which is well within the orbits of geosynchronous satellites which are located about 35 800 km above the equator.

It will be still well above the vast majority of satellites, including the International Space Station. Astronomers point that there is no danger to these satellites, as the asteroid will come ‘from below’ and not intersect the geostationary belt. 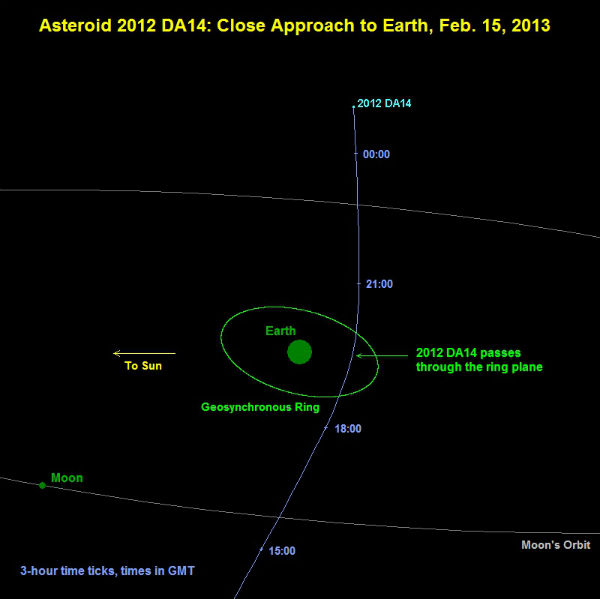 There are still no direct measurements of its size available but from its brightness, scientists estimate its diameter at 50 – 80 m. During its closest approach at 19:26 UTC, it should be visible in the sky to amateur telescopes (but not the naked eye), becoming as bright as magnitude 7 or 8 star. The asteroid will travel rapidly from the southern evening sky into the northern morning sky.

This NASA chart shows how bright asteroid 2012 DA14 will appear, as compared to other night sky objects, when it zooms within 17,200 miles of Earth on February 15, 2013. (Credit: Science@NASA)

The best viewing location for the closest approach will be Indonesia, from which the asteroid will be seen to move at a rate of almost 1 degree per minute against the star background. Eastern Europe, Asia, and Australia are also well situated to see the asteroid around its closest approach.

But, it will recede and fade to about 11th magnitude by the time the Earth rotates enough for observers in the continental United States to have a chance to see the asteroid. About 4 minutes after its Earth close approach, there is a good chance it will pass into the Earth's shadow for about 18 minutes or so before reappearing from the eclipse.

Astronomers have never seen an object so big come so close to our planet since regular sky surveys began in the 1990s. This record-setting close approach will surely help astronomers to a better determination of its size, shape, and trajectory.

NASA's NEO Program Office can accurately predict the asteroid's path with the observations obtained. It is a unique chance for scientists to study a near-Earth object up close. A few other known asteroids have flown by the Earth even closer, but those asteroids were much smaller. On average, an object of this size comes this close to the Earth about once every 40 years.

Featured image: Asteroid 2012 DA14 will be closer to Earth than some satellites (Picture: Nasa/YouTube)